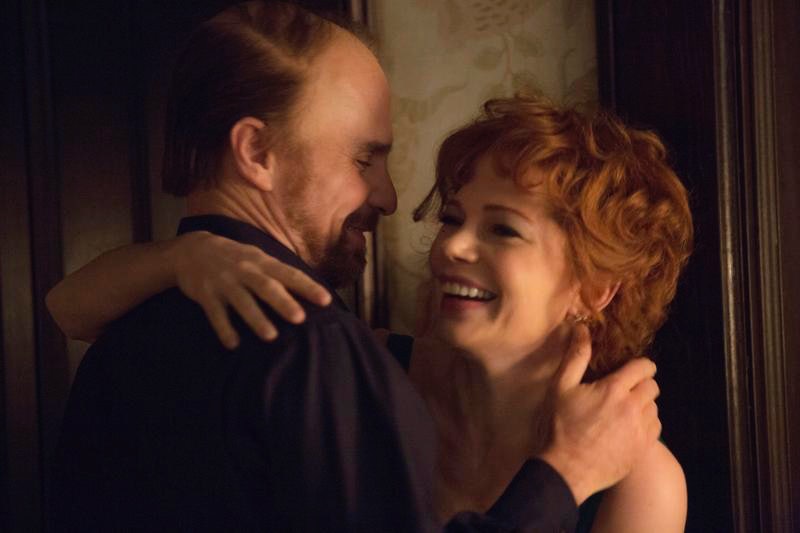 At first, Fosse/Verdon may feel like a bunch of musical theatre deep cuts. There's a joke about Stephen Sondheim's Company in the first episode that's a real blink and miss. However, as the show goes on the New York theater world gets a little more familiar, and the characters that emerge include a lot of names you've definitely heard before. Plus, the Fosse/Verdon cast pictures show that the they not only look like their IRL counterparts, they're bringing the theatrical gravitas necessary to convey the world these artists inhabited.

Besides actors playing Liza Minnelli, Chita Rivera, Ben Vereen, and Debbie Allen, you'll also see Ethan Slater — who most recently starred in the Spongebob musical as Mr. Squarepants himself — as Joel Grey in Cabaret. You can also hear his voice singing the opening song over the credits of the pilot episode. Expert theatre fans will also recognize Laura Osnes' brief appearance as Shirley MacLaine, Nick Blaemire in the cast of Damn Yankees, and Andrew Kober in a scene with Gwen Verdon — among others!

As for the big players, here's a look at their FX counterparts and what the real people looked like back then.

You know Sam Rockwell from any number of things, including his Academy Award winning turn in Three Billboards Outside Ebbing, Missouri as well as Vice, Galaxy Quest, Iron Man 2, and Moon.

While Bob Fosse, on the other hand, is remembered mostly for bowler caps and white gloves making jazz hands, his influence on choreography and dance is unparalleled. Fosse/Verdon focuses primarily on his wok with Damn Yankees, Sweet Charity, Cabaret, Pippin, Lenny, Chicago — and finally the film All That Jazz which is essentially an autobiographical film in which Fosse essentially "cancels" himself as a womanizer and depicts his own death.

Michelle Williams has played an icon before in My Week With Marilyn, and is of course also known for Manchester By The Sea, Dawson's Creek, Blue Valentine, and Brokeback Mountain.

Yes, Williams did play Sally Bowles in Cabaret on Broadway, but it's the other Michelle Williams (of Destiny's Child) who played Roxie Hart in Chicago.

As Gwen Verdon, she's able to shed light on an icon who became lesser known over the years. A four time Tony winner (with two additional nominations) Verdon's career on Broadway as a dancer, actor, and choreographer spanned six decades.

Norbert Leo Butz is probably best known for originating the role of Fiyero in Wicked on Broadway, though he started as a replacement Roger in Rent. His theatre credits include Big Fish, Catch Me If You Can, Dirty Rotten Scoundrels, and the recent revival of My Fair Lady. You may also recognize him from Dan In Real Life and the off-Broadway cast recording of The Last Five Years.

Coincidentally enough, screenwriter Paddy Chayefsky's most famous film Network has been adapted for the stage and is playing on Broadway now. He also wrote the screenplays Marty and Altered States as well as many stage plays.

Margaret Qualley, a former dancer herself, was most recently seen in The Leftovers, The Nice Guys, Native Son, and Novitiate.

One of the most famous of Fosse's associates, millennials know Ann Reinking best as Grace Farrell in the 1982 Annie. She has carried out Fosse's legacy (and her own) as a performer, choreographer, and director over the years. She also played a version of herself in All That Jazz.

This is not Nate Corddry's first role as a comedy writer, having also starred in Studio 60 On The Sunset Strip. You may also know him from Mom, The United States of Tara, and The Ugly Truth.

Neil Simon, of course, was one of America's most celebrated playwrights and both a contemporary of and friend to Fosse. His plays include Barefoot in the Park, The Odd Couple, Brighton Beach Memoirs, and Sweet Charity.

You know Aya Cash as Gretchen from You're The Worst, and also The Newsroom, and Sleepwalk With Me.

Joan Baim met Simon at a summer resort where she was a children's counselor. She was also a dancer and worked with legendary choreographer Martha Graham.

Paul Reiser is a TV veteran, star of Mad About You, Stranger Things, My Two Dads, and films including Beverly Hills Cop and Alien.

Producer Cy Feuer is somewhat of a foil to Bob in Fosse/Verdon, but their film Cabaret did win eight Oscars, and he is a three time Tony winner as well.

This transformation, however, is borderline uncanny. Some people have changed in 50 years. Hal Prince is not one of them. He's probably best known as a collaborator of Sondheim, but also produced Damn Yankees and the original production of Cabaret. He has over 20 Tony Awards. As a producer and director he is Broadway history.

Also a dancer, Susan Misner was in the film adaptation of Chicago and the Broadway companies of Guys and Dolls, How To Succeed In Business Without Really Trying and A Funny Thing Happened On The Way To The Forum in the '90s.

Fosse's wife, when he met Verdon, was Joan McCracken. It was she who encouraged him to become a choreographer. She was an early collaborator of his herself, and a standout in the original Broadway cast of Oklahoma, choreographed by the game-changing Agnes DeMille.

The signature hairstyle does a good chunk of the work turning Kelli Barrett into Sally Bowles, but she's got the chops to back it up. Barrett has sung on Broadway in Wicked and Getting The Band Back Together. She also played Frank Castle's dead wife on The Punisher.

Minnelli, of course, is a living legend who won an Oscar for her work in Cabaret and an Emmy for Liza With A Z with Fosse.

While Chita Rivera originated the role of Velma Kelly, actor Bianca Marroquin is the first Mexican actress to play Roxie Hart in Chicago. She was also a replacement Daniela in In The Heights and one of the stars of the 2006 revival of The Pajama Game.

Rivera only appears as a character briefly in the Fosse/Verdon pilot, but Chicago is coming down the pike, so expect to see more of her then. In real life, Rivera was also the original Anita on Broadway, the original Rose in Bye Bye Birdie, and the first Latino woman to win a Kennedy Center Honor.

Finally, Blake Baumgartner is a relative newcomer, but has no small task in playing Fosse and Verdon's bright and observational daughter Nicole.

Nicole Fosse serves as a producer on Fosse/Verdon, and had a career as a dancer. She's in the movie adaptation of A Chorus Line, and runs the Verdon Fosse Legacy LLC which preserves the memory (and the dance steps) that her parents left behind.

Later in the season, prepare to meet more famous faces in their '70s prime. Broadway's Brandon Uranowitz (An American In Paris, Falsettos, and currently Burn/This) will play Dustin Hoffman, the star of Fosse's Lenny Bruce biopic Lenny. So yes, that's Uranowitz as Hoffman as Bruce. Not complicated at all. Cats and On The Town star Tyler Hanes will additionally play Jerry Orbach, who originated the role of Billy Flynn in Chicago. This is clearly a labor of love to and from the Broadway community, so keep your eyes peeled for more.