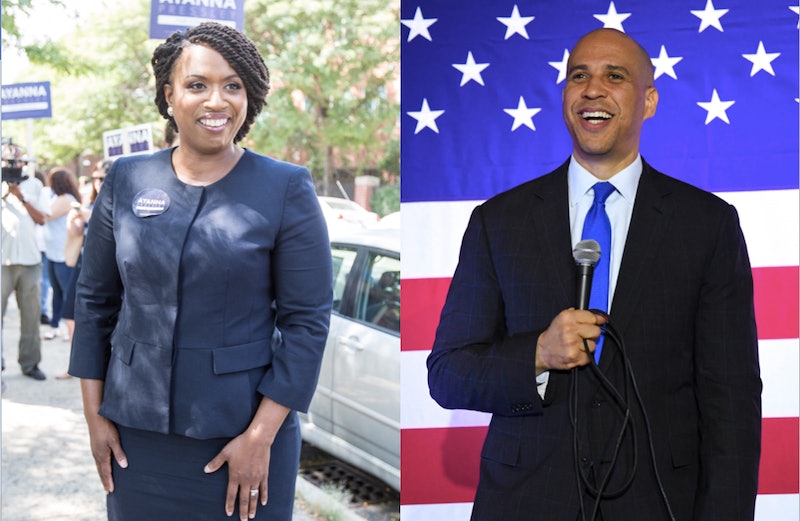 This week, two lawmakers in Congress are introducing legislation aimed at combating the United States' troubling rate of maternal mortality. Rep. Ayanna Pressley and Sen. Cory Booker's bill, the Maximizing Outcomes for Moms through Medicaid Improvement and Enhancement of Services (MOMMIES) Act, aims to reduce maternal mortality by, among other things, expanding Medicaid coverage to ensure that mothers receive more extensive postpartum care, according to a joint press release.

"We live in a nation that spends more than any other country on health care, yet we still have the highest rate of pregnancy-related deaths of any country in the developed world," Booker said in a press release. "And Black women are nearly four times as likely to die from complications related to pregnancy than white women — in New Jersey they are five times as likely."

Per the press release, the MOMMIES Act would also make sure that Medicaid coverage for pregnant and postpartum women includes comprehensive medical coverage, not just pregnancy-related care. The bill would also expand access to doula care, which, according to the press release, "has been shown to improve maternal and infant health outcomes, particularly among women of color."

"Maternal justice is about ensuring that every mom-to-be is listened to and treated with dignity and respect during and after childbirth," Pressley said in the statement. "The MOMMIES Act would do just that by promoting a community-based, holistic approach to maternal care that recognizes current disparities in healthcare and critical environmental factors impacting communities."

On Tuesday, the Centers for Disease Control released its report on the maternal mortality rate in the United States. The report found that as many as three in five pregnancy-related deaths are preventable, CNN reports. And, it affirmed that women of color are significantly more likely to die from pregnancy-related complications than their white counterparts.

Last month, Reps. Alma Adams and Lauren Underwood announced that they were forming a Black Maternal Health Caucus that they said would focus on researching and developing policies to combat the significant mortality rate among Black mothers. The advocacy group Black Mamas Matter Alliance backed the caucus' formation, and has also come out in support of the MOMMIES Act.

"In the United States we currently face the highest risk of illness, complications and even death due to lack of quality maternal care and more egregiously, institutional bias and racism rampant in our hospitals and healthcare systems," Black Mamas Matter Alliance co-directors Elizabeth Dawes Gay and Angela Doyinsola Aina said in a statement with Booker and Pressley. "Black Mamas Matter Alliance supports the MOMMIES Act due to its potential to advance maternal health, rights and justice for Black Mamas and ensure their ability to thrive before, during and after pregnancy."

The bill's introduction comes just days before Mother's Day is celebrated in the United States.