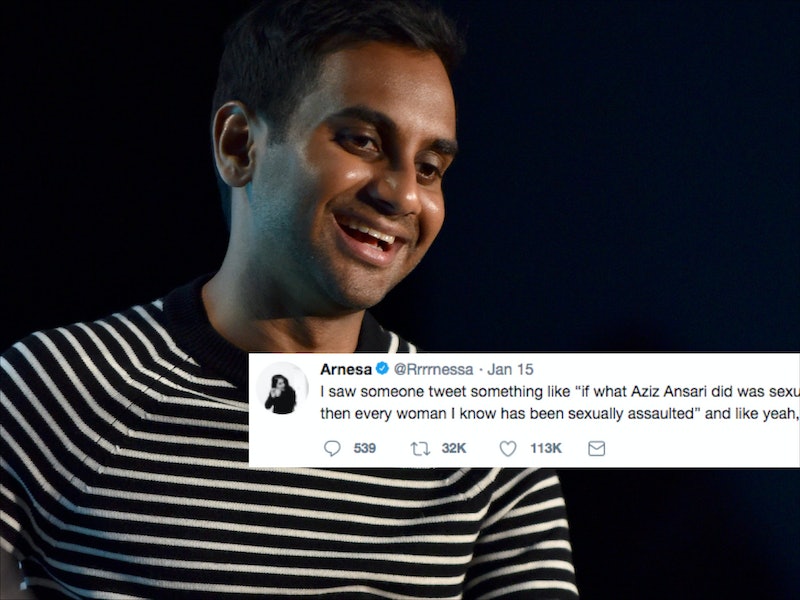 For every wealthy and powerful predator who hires a handful of lawyers to smear a woman he assaulted, there are countless women, and men, whose sexual traumas are less clear-cut. It wasn't quite rape. It wasn't exactly forced — at least, not entirely. It didn't end up in a police report, or splashed across a front page. It just sort of happened — maybe to you, or to a friend, or at the hands of another friend. Every woman knows a story about a man who isn't evil, but did something horrible. This week, that man appears to be Aziz Ansari.

In the words of HLN star Ashleigh Banfield, that's just a "bad date." In the words of "Grace," the woman who went public with her story about Ansari, that's "sexual assault." According to Grace, Ansari tried over and over again to pressure her into sex, at times relenting and suggesting they "chill" before trying once again.

"I believe that I was taken advantage of by Aziz. I was not listened to and ignored," Grace told the website Babe. Ansari later said in a statement that his sexual experience with Grace was "by all indications... completely consensual."

If you consider Ansari's behavior "sexual misconduct," then it falls under the umbrella term used to describe actions by Harvey Weinstein, James Toback, and Kevin Spacey. That doesn't feel right. Yet, if you don't consider it "sexual misconduct" — only a "bad date," to use Banfield's words — then you imply that Grace has no right to her own trauma. That feels even worse.

This isn't a new dilemma. Late last year, in the midst of the cascade of shocking accusations against predatory men, The New Yorker published a piece of short fiction named "Cat Person." In Kristen Roupenian's story, a student named Margot has an unsettling and uncomfortable sexual encounter with an older man, Robert, but not one that Margot regards as sexual assault.

The story swiftly became the magazine's second most-read story of 2017 (the publication's Weinstein exposé took first place). Roupenian's lucid description of a romantic encounter was described as almost excruciatingly relatable, and she was offered a million-dollar book deal.

Like Ansari in Grace's story, Robert is not a bad man. Instead, Roupenian describes him as blind to non-verbal cues, confusingly inept and inarticulate, and with zero understanding of Margot's read of the situation.

Of course, Cat Person is fiction, and Grace's story is real. Yet, both became talking points because they mirror the real-life experiences of countless women and men. Women are used to acquiescing to men's needs — often, for their own safety — and both women and men are taught that sexual assault is black and white; that it is either entirely consensual, or completely wrong.

If we believe Ansari's account, he was hardly aware of Grace's discomfort. "It was true that everything did seem okay to me, so when I heard that it was not the case for her, I was surprised and concerned," reads Ansari's statement.

I've written before about how believing women means believing them without exception, but, in this situation, it's possible that both Ansari and Grace are speaking honestly about their respective experiences.

That's because this kind of sexual assault, or misconduct, or however you choose to define it, is rarely as clear-cut as we'd like. When women feel they can't say no, when men assume that women feel safe doing so, when women are taught to feel they're to blame and men are taught to be aggressive — when you throw alcohol and celebrity in there; and even if you don't — you end up with these pervasive, and frighteningly common, experiences. The problem isn't black and white. Unfortunately, neither is the solution.

You can download an app to formally and legally give your consent, but what if the other person assaults you thereafter? You can make sure you're never left alone on a date, but at what point can you decide that you're safe? There are no easy answers, but critical to any kind of solution is being aware that these situations happen. That any sexual encounter can play out in an unexpected and sometimes frightening way, and women often say nothing because, well, look at Weinstein, look at #MeToo, how many women have it so much worse?

Yes, bad men exist — but they're not the only reason that we have rape culture. We have rape culture in part because women are afraid to leave, to say no, to be blamed; in part because men think consent is black-and-white, are taught to think of women as sexual objects, and don't want to or don't feel they can communicate. Until we deal with the factors that brought us to this point, and acknowledge that nothing about a sexual encounter is simple, we can't begin to tackle the issue.

More like this
Here Are Amazon's Best Prime Day Deals & They're Selling Out Fast
By BDG Commerce
Naomi Osaka & Emma Raducanu’s Experiences Have Inspired A New Amazon Show
By El Hunt
We’ve All Had Bad Sex. Nona Willis Aronowitz Is Talking About It.
By Sophia Benoit
It’s Official: 'The Bachelorette' Is No Longer A Fairy Tale
By Samantha Allen
Get Even More From Bustle — Sign Up For The Newsletter