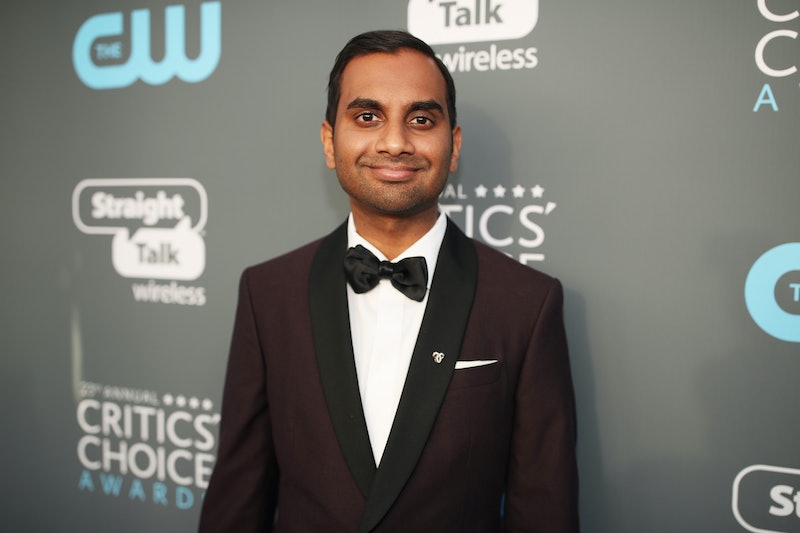 Netflix is home to several well-known comics, with hundreds of comedy specials to choose from on the streaming platform. Aziz Ansari's new comedy special will join them, when the actor and comedian re-enters the Netflix fold on July 9. Ansari's upcoming special, his first in nearly five years, is simply titled, Aziz Ansari: Right Now. The Hollywood Reporter confirmed the news on Monday, July 1, and revealed details about what audiences can expect.

Per the outlet, Ansari's new material is based on his recent worldwide comedy tour Road to Nowhere, which sold out in 75 cities nationally and 12 countries abroad, including shows in Mumbai, Delhi, London, Paris, and Sydney. Radio City Music Hall and three shows with Dave Chapelle at Austin's The Paramount Theater were a few notable sold-out performances.

The special, which is Ansari's third with Netflix following 2015's Aziz Ansari: Live at Madison Square Garden and 2013's Aziz Ansari: Buried Alive, was filmed at the Brooklyn Academy of Music tour stops in New York. It's directed by Spike Jonze, who is known for directing films including Her and Where the Wild Things Are. A teaser for the special shows a more stripped-down version of the comedian, as he's shown casually getting ready for a set backstage in a vintage Metallica shirt.

Ansari's return to the comedy main stage arrives after some turbulent times for the performer. In a January 2018 Babe.net story, titled, "I went on a date with Aziz Ansari. It turned into the worst night of my life," he was accused of sexual misconduct. On Jan. 14, 2018, Ansari responded to the claims in a statement issued to THR that read:

The next day, I got a text from her saying that although "it may have seemed okay," upon further reflection, she felt uncomfortable. It was true that everything did seem okay to me, so when I heard that it was not the case for her, I was surprised and concerned. I took her words to heart and responded privately after taking the time to process what she had said.

Although the piece was highly-debated, it did result in the Parks and Recreation actor taking some time away from the spotlight. Per a source for The Guardian who attended one of Ansari's shows, he does address the allegations and the broader #MeToo movement over the course of his set.

For fans of Ansari's, many have been waiting for a different kind of Netflix homecoming for the creator. His 2015 comedy series Master of None debuted on the platform to high acclaim, before a second season was released in 2017. In an interview with THR shortly after the sophomore season debuted, the star and co-creator expressed a desire to continue the Emmy-winning series, just not right away.

"I'd rather we not end it here," Ansari said when asked if the Season 2 finale could act as a series finale, too. "I'd rather make one at some point in my life. I don't know when that is, years from now or whatever. Ideally, I'd like to make more because I love the team of people and the whole process. I'm just happy I could do the show." Alas, it seems that Master of None enthusiasts will have to pine a little longer for new episodes.

July will bring Ansari's thoughts on where he is...right now, and perhaps, also address his time out of the spotlight.

More like this
Here’s Everything Coming To & Leaving Netflix In February
By Jake Viswanath
The Black Lotus Staff Has "Had Enough" In The 'White Lotus' Spoof From 'SNL'
By Brad Witter
Ashton Kutcher Wants Danny Masterson “To Be Found Innocent” In Rape Retrial
By Jake Viswanath
'The Queen’s Gambit' Season 2 Tweet Wasn’t From Anya Taylor-Joy
By Mary Kate McGrath, Jack Irvin and Grace Wehniainen
Get Even More From Bustle — Sign Up For The Newsletter
From hair trends to relationship advice, our daily newsletter has everything you need to sound like a person who’s on TikTok, even if you aren’t.