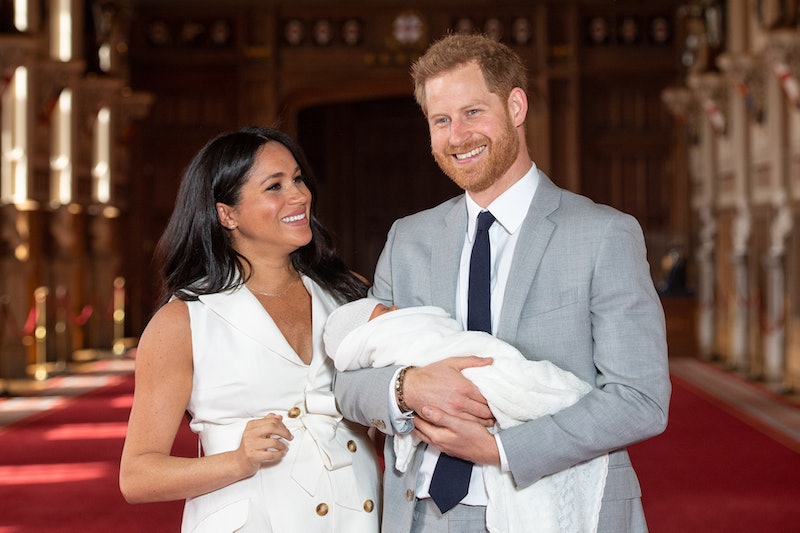 Just based on the photos that they've released, you can tell that Archie Harrison Mountbatten-Windsor is already as cute as can be. And according to a new report, the cutie even has one major thing in common with his father. According to People, baby Archie has red hair like Prince Harry, proving that he takes after his father in at least one major, signature way.

While the Duke and Duchess of Sussex haven't released too many photos or details pertaining to their little one, a source recently shared some fun information about baby Archie in a report from People. "He's a happy baby," they told the publication, before continuing to reveal one very cute feature that the youngster shares with his dad, "He has lovely, puffy little legs and tufts of reddish hair. He’s really adorable.”

Back in May, shortly after Archie was born, Meghan Markle and Prince Harry addressed reporters in St. George's Chapel in Windsor Castle, where they discussed who they believe their son looked more like, also as People noted. “We’re still trying to figure that out,” the former Suits star said. “Everyone says babies change so much over two weeks. We’re basically monitoring how the changing process happens over this next month really,” Harry added, “His looks are changing every single day so who knows.” Well, if People's latest report is any indication, the royal couple can safely say that baby Archie is well on his way to being a mini-Prince Harry.

Even though they haven't released too many details or photos relating to Archie, the Sussex family has, on occasion, posted snaps of their little one on their official Instagram account. On May 8, when Archie was officially introduced to the public, the Duke and Duchess of Sussex shared a photo of their bundle of joy with the new parents, Markle's mother, Doria Ragland, and Harry's grandparents, Queen Elizabeth and Prince Philip. The iconic shot was captioned with, "This afternoon Their Royal Highnesses introduced Her Majesty The Queen to her eighth great-grandchild at Windsor Castle."

On June 16, to celebrate Father's Day, the couple shared another photo of their son, this time with his tiny, oh-so-adorable face on display as he grabbed onto his father's hand. They captioned the post with a simple and meaningful, "Happy Father’s Day! And wishing a very special first Father’s Day to The Duke of Sussex!"

In early July, the Duke and Duchess once again took to their official Instagram account to share an update about baby Archie. This time, the couple showcased some behind-the-scenes photos from their child's christening, which was held at Windsor Castle (their go-to royal locale). They detailed that the service was officiated by the Archbishop of Canterbury, Justin Welby, and was attended by numerous royal family members and friends.

"Their Royal Highnesses feel fortunate to have enjoyed this day with family and the godparents of Archie," they wrote. The Sussex Royal account not only posted an official portrait of the royal family at the christening but also a sweet photo that featured Markle and Harry cuddling their adorable son.

Every photo that the Duke and Duchess of Sussex share of baby Archie is somehow cuter than the one before. And, if People's report is any indication, the next pic that they share of their son, with Prince Harry-esque red hair and all, may just be the cutest of them all.