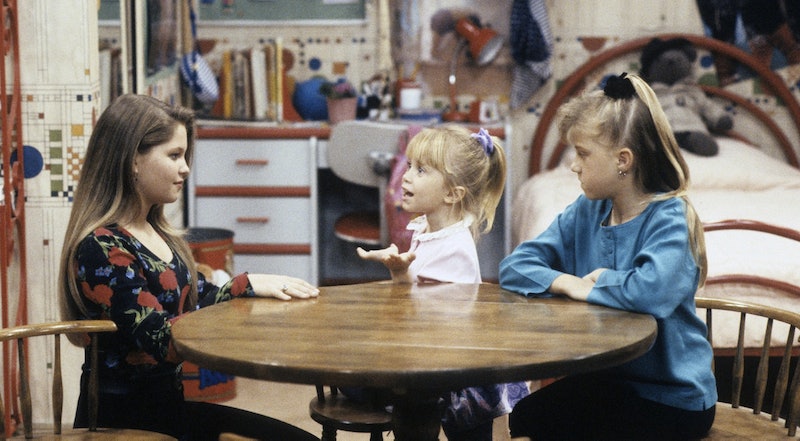 What you will name your kids is perhaps one of the most impacting decisions a person will make in their lifetime. Maybe it's the nerd in me, but I look forward to seeing how greater cultural phenomena influence people so profoundly they'll honor their offspring with names of characters from their favorite shows and films. In the past few years parents have gathered inspiration from characters from Game of Thrones and Harry Potter, among other popular culture trends — but the newest trend isn't so much naming your baby after a specific character, but rather a name reminiscent of a period of time. Baby names from the '90s (and everything else, let's be real) are making a comeback, baby — at least, according to trend research from UK-based website Baby Centre.

The '90s were an era of unparalleled cultural influence. The music, film, and television was unlike anything that has come before or after. As the average age for a woman to have her first baby is around 26, according to CDC data, if you do the math it stands to reason that '90s kids becoming parents in 2018 are channeling their childhoods when picking names. This makes even more sense when you consider just how charming so many people find all things vintage. If you're struggling to think about a quintessential '90s name, here are a few from Baby Centre that will surely bring you right back.

Maria is arguably one of the most classic women's name in the Western world. It provides a nice nod to the eponymous religious figure, or, if you're looking for a different direction, the protagonist in West Side Story. Perhaps you hope your daughter has high athletic aspirations? Maria Sharapova is another possible namesake.

Off all the famous Courtneys, the two who stand out most from the crowd were both icons in the '90s. This name could be a nod to Friends star Courtney Cox, or punk musician Courtney Love. Courtney is also a gender-neutral name, so let your creativity run wild.

The '90s are when iconic supermodel Naomi Campbell rose to fame. She paved the way for black women in the modeling industry, and would serve as a lovely inspiration for a baby name.

Before there were Mean Girls' plastics, there were The Heathers. Though ~technically~ Heathers was released in 1988, why wouldn't you want to name your daughter after the classic?

What young girl wouldn't want to be named after pop goddess Jennifer Lopez or haircut whisperer Jennifer Aniston? Both of their iconic careers found their beginnings in the '90s.

My guess is there is one big reason the name Bradley is making a comeback: an certain dreamboat actor who has more than once played Jennifer Lawrence's leading man.

This is one of those names that is truly the epitome of a '90s name. Perhaps it could be a nod to Ryan Philippe, or, for a more contemporary icon, Ryan Gosling.

Timothy may have first rose to popularity because of Tim Burton's success as a director, or even because of Tim Allen's role on Home Improvement. Whether a nod to these or to Tebow, McGraw, or Chalamet (granted, Timothée is spelled the French way), Timothy is a solid choice.

When I think of Paul, the Beatle is the first person to come to mind. But say you want to name your baby after Paul Rudd or the late Paul Walker? There is no bad option here.

Whether Nicholas ever *actually* went out of style is arguable, as it feels as though everyone has a friend named Nick. But considering how many talented Nicks exist (the youngest and best Jonas Brother, for one) it is unlikely this name will vanish anytime soon.

Check out the full list of 20 baby names from the '90s making a comeback on Baby Centre — in the words of your 20 years ago past self, they're all hella tight.