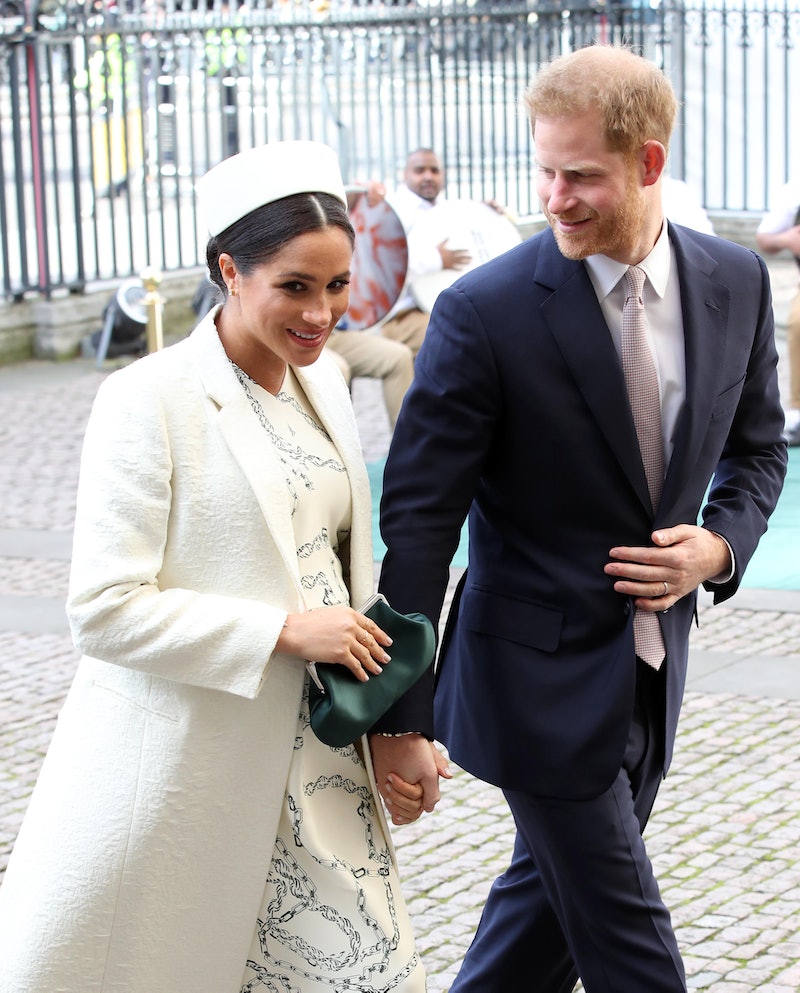 On Monday, May 6, the Duchess and Duke of Sussex welcomed a royal baby boy into the world — and while we don't know much about him yet, we know enough to map out Baby Sussex's sun, moon, and rising zodiac signs. His name and face have not yet been revealed, the time of his birth and the location were revealed by Kensington Palace — so, by using that information (5:26 a.m. and Windsor, England, respectively) to calculate the baby's birth cart, we can know exactly what the stars have in store for him.

Spoiler alert: though the baby's moon sign is Gemini, his sun and rising signs are both Taurus, so there's some serious bull energy on his chart, so you better believe he's going to be strong-willed. That said, with parents like Meghan and Harry, that's not really a surprise, is it? Bustle talked to astrologer Lisa Stardust about the royal baby's birth chart to get a more comprehensive breakdown of his personality and astrological influences. While his sun sign might be a Taurus, there are a few other factors that play into his complete zodiac persona, and Stardust not only helps us to see each of his influences, but how they will all come interact with each other and combine to create a very dynamic and driven personality type.

People typically refer to their sun signs as the most important indicators of personality, but actually, your moon sign and rising sign can be just as crucial. The sun sign describes the way you exist in the world, the way you present yourself and the things about yourself that you share. Conversely but equally as important is the moon sign, which represents your private emotional self, the part of you that you're less likely to share with others. Also worth paying attention to is your rising sign, which explains the way that others see you, or your outer self. According to Stardust, this is how the royal baby's signs will shape his inner, private and outer selves:

"The royal baby will be a hard worker... and a strong willed person throughout life," Stardust says of the babe's Taurus ruling. Taurus personalities are known for their persistence and dedication, making them very respectable workers and very driven and committed in their personal lives, too. Stardust also says that this babe will be "loyal (to the core) and creative projects will be the upmost of importance," meaning he might take after his mother most prominently.

The royal baby's rising sign is also Taurus, which yes, means double Taurus energy. But the Taurus influence in rising territory is a bit different than sun territory. "A lover, not a fighter, the royal baby will have beauty and drive to follow through on projects — not compromising his beliefs for anyone," Stardust explains of the child's kind and strong heart. But with the influence of parents like Harry and Meghan, who literally never stop working and are the epitome of kindness, it seems it would be hard for him to turn out any other way, TBH. Not so surprisingly, Stardust adds, "this child is meant to shine and be in the spotlight! A strong ego and sense of bravado will mark his strengths throughout life."

If you're worried about what a kind of effect a double Taurean has on a child, Stardust assures us that "the planets won’t overshadow each other, but the child will be more Taurean because all the planets answer to Mercury in Taurus," Aka, he might teeter on the stubborn end of strong-willed.

Though the royal baby will be incredibly driven and passionate about all of his endeavors, with a Gemini moon sign Stardust warns he "may suffer from low self-esteem and that confidence will be a long time issue." But to balance out that complication, Stardust add that "the child will have intelligence, which he inherits from the mother, and have a very strong sense of humor and self-awareness," which will certainly help with the insecurities that might rear their head.

Overall, the royal baby has a zodiac personality that suits him impeccably for the life he was born into, so it appears it really was written in the stars in his case.