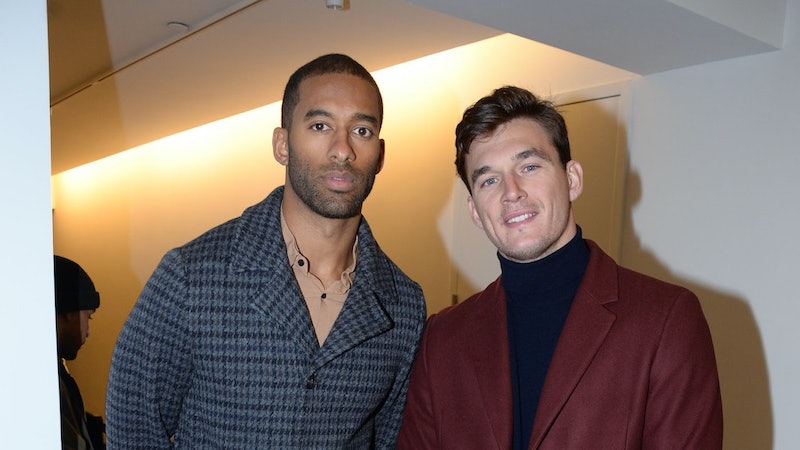 Following a momentous first for the franchise, Bachelor alums are celebrating Matt James’ historic role as the first ever Black Bachelor. Just a few days after fans created a campaign that called for more diversity in the franchise, ABC announced on June 12 that Matt, an entrepreneur and real estate broker originally cast in Clare Crowley’s upcoming Bachelorette, would headline Season 25 of Bachelor, set to debut in 2021. The news also comes after Rachel Lindsay, the first and only Black Bachelorette, called out the series for its “embarrassing” lack of diversity.

Rob Mills, an ABC executive, however, claimed that the decision isn’t in response to Rachel’s criticisms; he told Variety that Matt was already “on our radar” after COVID-19 halted production of Bachelorette. “When we realized the shutdown was going to extend through the summer, we started thinking about how we were going to choose our Bachelor,” Mills said. “We were thinking, ‘Do we announce him early, or do we put him on Clare’s season and then announce him later, if it doesn’t work out with Clare?’ We didn’t make a final decision until recently, but this has been talked about for quite some time.”

Regardless, Bachelor’s Rachel, Tyler Cameron, Hannah Brown, Peter Weber, and more celebrated the historic feat. Rachel said of Matt’s casting on Good Morning America, "I was hoping when I came on to be a trailblazer for that and to increase diversity in the audience that watches it.” She also hoped for everlasting change. “I want producers of color. I'd like for them to cast leads that are interested in dating outside of their race that aren't just getting their first-time experience… on national TV,” she said. “I need the acknowledgment of that, not putting a band-aid over the situation and just saying, 'Here, we're going to put this here. Are you happy now?'"

As for Matt's BFF Tyler, he celebrated the news with an Instagram selfie of the two. “Congrats to my brother @mattjames919 on being named the Bachelor,” he wrote. “This is all a testament of who you are as a person. Now the world gets to see the person you are and the heart you have. You can change the world.” He added, “Not excited that somebody will be taking my spot as your snuggle buddy.”

Hannah also celebrated on Instagram and wrote, “Matt James is the Bachelor. I cannot contain my excitement for this amazing human making history as the first Black Bachelor — to God be the Glory!” She added, “I am so blessed to now call you friend. You’ve supported and encouraged me in some of the hardest moments lately and I’m so freaking pumped to support and encourage you as you get ready to go on an adventure of a lifetime!”

Peter, who starred as last season's Bachelor, wrote on Instagram Story, “Congrats @mattjames919 Very happy for you and @bachelorabc! Enjoy the ride, just get it right the first time, it’s easier that way.”

Below are more reactions from Bachelor Nation.

In the words of Bachelor in Paradise's Nicole Lopez-Alvar, this is only the beginning.

More like this
Hannah Ann Got Engaged 3 Years After 'The Bachelor' & The Proposal Was Dreamy
By Grace Wehniainen
Andy Cohen Apologized To Larsa Pippen After A 'RHOM' Season 5 Reunion Dust-Up
By Brad Witter
'Bachelorette' Vet Clare Crawley Unveiled 2 Special Wedding Day Accessories
By Stephanie Topacio Long
'Bling Empire: New York' Star Nam Laks Is The “Blair Waldorf Of Thailand”
By Alyssa Lapid
Get Even More From Bustle — Sign Up For The Newsletter
From hair trends to relationship advice, our daily newsletter has everything you need to sound like a person who’s on TikTok, even if you aren’t.