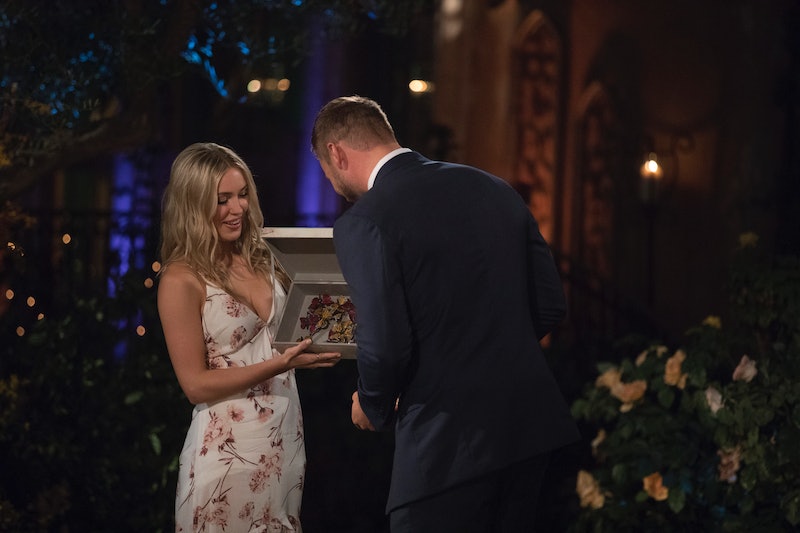 Plenty of Bachelor contestants have joke job titles like "sloth" and "dolphin lover" and "twin," so when the show actually leaves in a real profession, it's kind of a big deal. Much in the way that romantic music can signal someone's in it for the long haul, a legitimate job title means they're likely a serious contender. That goes doubly so for Bachelor Season 23 contestant Cassie Randolph, whose job shows she has a heart of hold that could win over Colton.

The 23-year-old's ABC profile calls her a "true native Californian." She’s from Huntington Beach, California, likes to surf, and also has two cats, Maverick and Goose (she must be a Top Gun fan). More importantly, though, Cassie is finishing up a master's degree in speech pathology at the University Of Wisconsin—Eau Claire with which she someday hopes to open her own private speech pathology practice for children. For those that don't know, speech language pathologists "treat many types of communication and swallowing problems," according to the American Speech-Language-Hearing Association. This includes issues with saying and putting sounds together; understanding language (such as aphasia); social communication; stuttering; eating and swallowing; and reading, writing, and spelling, among others. Cassie wants to, quite literally, help children find their voices.

While in school, though, Cassie still has bills to pay, so according to her LinkedIn, she works as a substitute teacher for ESL (English As A Second Language) classes at the Huntington Beach Adult School and as a regular substitute teacher in the Huntington Beach Union High School District. She's worked as a speech language pathology assistant and a behavioral therapist in the past, too.

This giving mindset and desire to help others is sure to help Cassie connect quickly with Colton. He runs the Colton Underwood Legacy Foundation, which according to its official website, is a non-profit that seeks to "empower people with cystic fibrosis to live fully, dream big, and support each other." It also "raises funds for research and provides equipment and resources for people of all ages living with cystic fibrosis." The foundation's site reports that, since 2015, it's given nearly $100,000 to patients, clinics, and researchers in order to fight cystic fibrosis and help those living with the disease. Colton spoke about this foundation when he was on The Bachelorette, and it seems like something he takes great pride in.

As he made clear on The Bachelorette, Colton is looking for a substantive, long-term relationship. Along with Cassie's passion for helping others, her bio says she's also very dedicated to her family, and that's sure to draw Colton to her, too. He discussed his love for his family on The Bachelorette, and it was easy to see how close he was to them when Becca visited his hometown. Now, the shoe is on the other foot, and Colton gets to make the decisions. But from the sounds of it now, Cassie has a good shot at winning his heart and taking home the final rose.