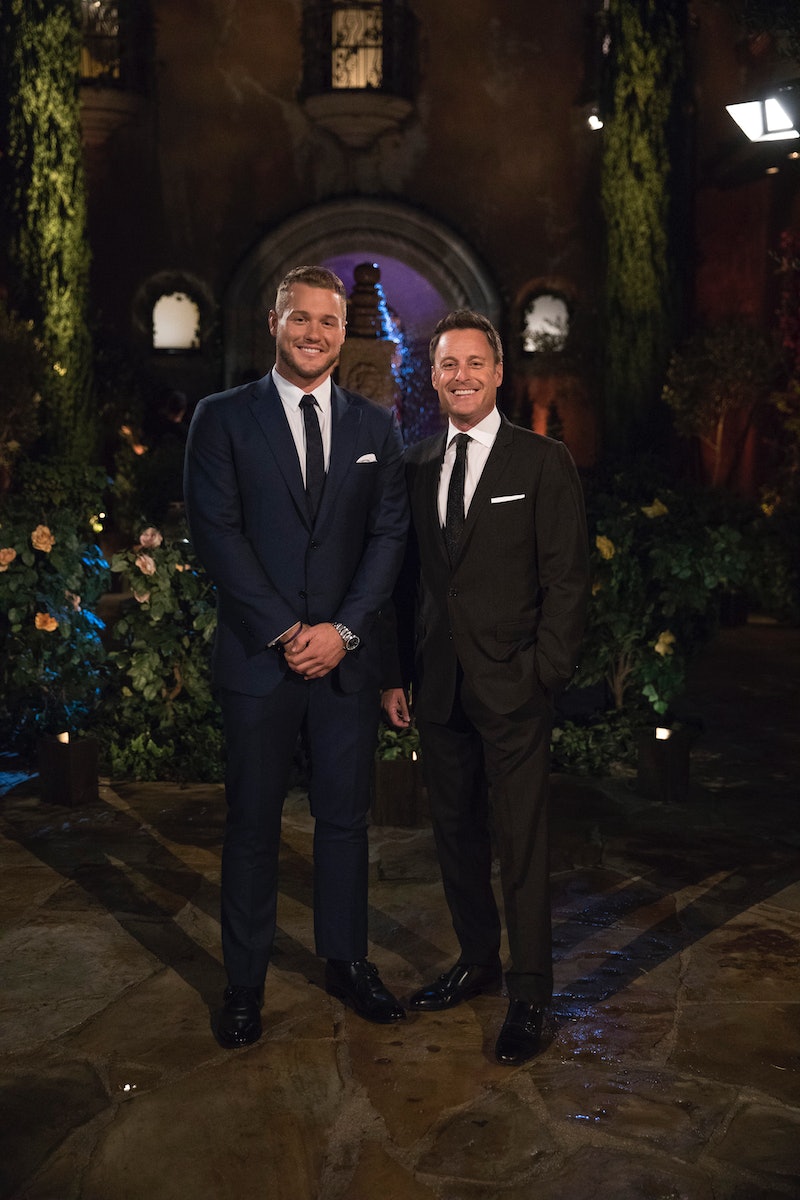 Colton Underwood's upcoming Bachelor season has yet to air on ABC (and won't for another five weeks or so), but already, fans are dying to know how it ends. Although the jury's still very much out on that one, Blake Horstmann's new comments on Colton's Bachelor season — shared exclusively with Entertainment Tonight, per the outlet's recent report — suggest its finale will be worth the wait. During his conversation with ET Friday night, Nov. 30, the Bachelorette runner-up said he doesn't know much about the specifics of Colton's Bachelor journey (which conceivably wrapped up several weeks ago IRL, around the same time filming reportedly wrapped on the season) or its eventual outcome.

But Blake did offer a little teaser: The season's conclusion, however it plays out, is going to be big. And, apparently, it's also going to be one Bachelor Nation hasn't seen before. Big talk, especially considering Arie Luyendyk, Jr.'s infamous Bachelor finale earlier this year, so perhaps that gives audiences an idea of what they could be in for with Colton come January. According to ET's report, Blake said,

Blake, who competed for Becca Kufrin's love alongside Colton during this year's most recent Bachelorette season, reportedly told ET that he didn't "pry" his former co-contestant and current friend for more information about how he fared as the Bachelor. But, given that he and Colton are friends, Blake is privy to basic updates about how he's doing post-Bachelor. To that end, Blake told ET that "[Colton is] doing good" and "he's happy," though he also revealed that, "There's some drama [on the upcoming season], from what I've heard."

Though the details of said drama remain under wraps right now, some similar comments from Bachelor host Chris Harrison to E! News over the weekend echoed Blake's thoughts on Colton's Bachelor season. "It's a pretty gut-wrenching, wild ride with him," Harrison reportedly told the publication, adding,

"Once you get to see [Colton] and know him, everyone is going to fall in love with him and really respect that he is so open, so vulnerable, so emotional."

Buzz over Colton's forthcoming run on the Bachelor has really picked up in recent weeks, basically ever since the former NFL player alerted the masses to his return from filming with a Nov. 17 Instagram post captioned, "Spoiler alert: I'm back." Just two days before that, Harrison revealed Colton's Bachelor promo poster via Twitter, which definitely focused too much on his virginity and definitely caught the internet's attention.

Then, less than two weeks later, Colton himself returned to IG with what originally seemed to be a nod to his Bachelor winner. "Date night with my babe," he wrote, captioning a photo of himself at last week's Denver Nuggets game, standing next to someone who's been photoshopped out and replaced by a magnified pregnant woman emoji. For a minute there, fans on social media were all but convinced the emoji was meant to convey some sort of message about Colton's Bachelor season (and/or the state of his virginity) though he revealed via Twitter not long after that his "date" to the game was actually just Blake.

"You guys read in to things wayyyy too much... can't a guy just take his pregnant gal out on a date without speculation on his virginity?" wrote Colton in a tweet later that evening. Of course, as one fan graciously pointed out in the tweet's comments section, Blake had already spilled the beans in a video shared to his Instagram Story. "Sorry to disappoint you America, but I'm @coltonunderwood's plus one," he wrote, captioning the IG Story.

So, it seems Blake is almost as in the dark as the rest of Bachelor Nation when it comes to the details of Colton's upcoming onscreen quest for love, courtesy of ABC. And while that might be a little disappointing for fans who really want answers right now, it's also probably for the best. After all, what would be the fun in watching Colton's season unfurl on TV next year if you knew the ending before it even began?