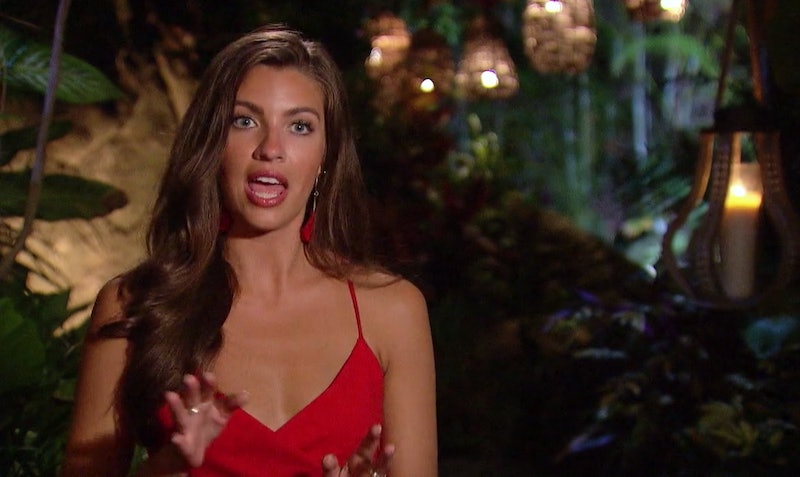 Very rarely, does Bachelor in Paradise highlight real-life relationship issues, i.e. problems that have not resulted from Stagecoach. However, Clay called Angela "unambitious" for wanting to be a mom and they had a very real conversation about tough times when they were together. Post-show, Bachelor in Paradise star Angela defended herself after Clay questioned her ambitions during an episode of the Bachelor Happy Hour podcast.

Angela discussed the talk with Clay during a conversation with Bachelor Happy Hour host Ali Fedotowsky-Manno and guest host Krystal Nielson. Krystal said to Angela, "He wanted someone who had bigger goals then to just be a mother and housewife. How did that feel hearing that?" Angela said, "I honestly feel like God put me on this earth to be a wife and a mother. That’s what I excel at. Like how dare you diminish that just because it doesn’t line up with whatever."

Discussing stay-at-home moms, Angela maintained, "That's the hardest job in the world." Krystal concurred and added, "And so I felt that I was really disappointed when he had said that because I felt that he was really minimizing the power and strength of moms."

What did Clay say that hit such a nerve? During the Sept. 3 episode of BIP, Clay told his ex, "I don't feel like I was as far along as you were. I just felt like our goals and ambitions weren't parallel. That's just something I want: to push each other." After Angela countered that she did push him toward his goals by encouraging him to work out to get back on an NFL roster. She also mentioned that he worked out for four hours a day and she didn't want to be at the gym that long, which is very understandable.

Later in the conversation, Angela declared, "I've always taken care of myself." And it seemed like Clay agreed with that when he began with, "You do. You're an independent woman."

The man should have just stopped there. Instead, he really put a foot in his mouth. He remarked, "You do take care of yourself, but your goal is to be a wife and a mother. And I appreciate that so much, but, like, for me, what I discovered is that I want more." Wow.

Based on the footage shown, he didn't backtrack after that one. Instead, he doubled down and told Angela, "With us, I didn't feel like it was going to be something equal. I felt like I would have to take care of us." She retorted, "I never asked you to do any of that," and now she has even more to say after watching the episode.

At this point, Clay hasn't specifically addressed this part of their conversation. However he post about the exchange in a Sept. 5 Instagram Story. The former NFL player declared, "That convo was more eidted than an influencers Insta pic." That could be shade at just about everyone who's appeared on this show.

Hopefully, there was more to that talk's conclusion. Or maybe Clay will provide some clarification during the BIP reunion episode. Or the two them might just have a camera-free conversation offline, but the viewers need closure too, right!? Just kidding. Kind of.