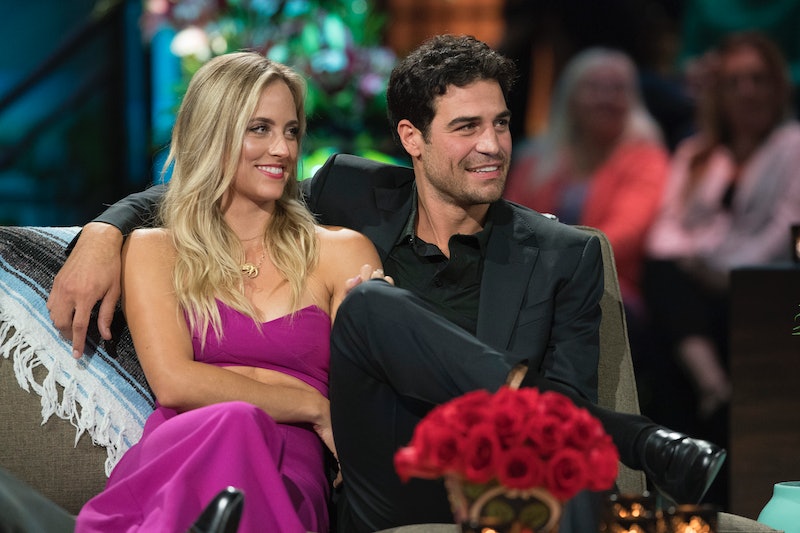 A romance that began budding on last year's season of Bachelor in Paradise is now in full bloom. Grocery Store Joe Amabile and Kendall Long are getting serious. It seems that they're embarking on their first transatlantic vacation together. So if you enjoy their mostly Los Angeles and Chicago-based mini-food reviews on Instagram, some very entertaining European editions are probably coming your way.

"Heading to Europe today with this lovely human!" Kendall captioned a March 24 photo with Joe on Instagram. "We may have practiced our wine drinking yesterday." According to the photo's location, the couple recently visited Rosenthal Winery in Malibu, California with friends and family, and they had to sample a glass or two of vino.

Since they started dating after falling for each other in Paradise last year, they've been on many adventures together. They're from opposite sides of the country (L.A. and Chicago), so naturally, they had to show each other around their hometowns. They've also spent time in New Orleans, Boston, Florida, Indiana — you get the point. They travel a lot. Joe also spent a ton of time in L.A. and New York City during his stint on Dancing With The Stars. (Joe and his partner Jenna Johnson were eliminated eighth, giving them the fifth place ranking overall.) Not only did Kendall fly in to cheer him on from the audience, she joined the cast on their bus tour of the country following the show's end.

"We've honestly only had long distance for about a week at a time, because we keep on going to see each other," she told Us Weekly in a January interview ahead of the tour. "I think we're obsessed with each other. It's kind of gross." The DWTS tour ended on March 10 for Joe, and Kendall told Us that they had plans to move in together after it wrapped.

"That's kind of the thing that pushes us to move things to Los Angeles," she said. "So after the tour, he's going to be moving to L.A. So we're going to have a lot more time together, and that's the light at the end of the tunnel. … Moving in together." She said they even have their place's decor theme chosen: the 1920s "because next year is the roaring '20s." Those plans may still be in their future, but right now, they're off to the first stop on their European trek: Paris.

In preparation for their travels, they took one last jog together to get their exercise in. She posted a video of them finishing up on her Instagram story. "First stop?" Kendall asked. "Paris!" Joe said. "Then? Amsterdam," Kendall said. "Then London," Joe replied. It looks like they have a lengthy trip ahead of them — and that may not be the whole itinerary.

"So we've been given some advice, when traveling to France, you have to say, 'Bonjour!'" Kendall said in another story. "Yeah, say hello first," Joe said. Kendall agreed, "It's the polite thing to do." But then, Joe had an epiphany. "I don't know what 'Hello' is in Amsterdam," he said. Well, he's in luck there, because according to Iamsterdam.com, the majority of the city's residents speak English, although the native language is Dutch. Hopefully they have time to brush up on their foreign languages before their plane lands.

Bon Voyage to the lovely couple!