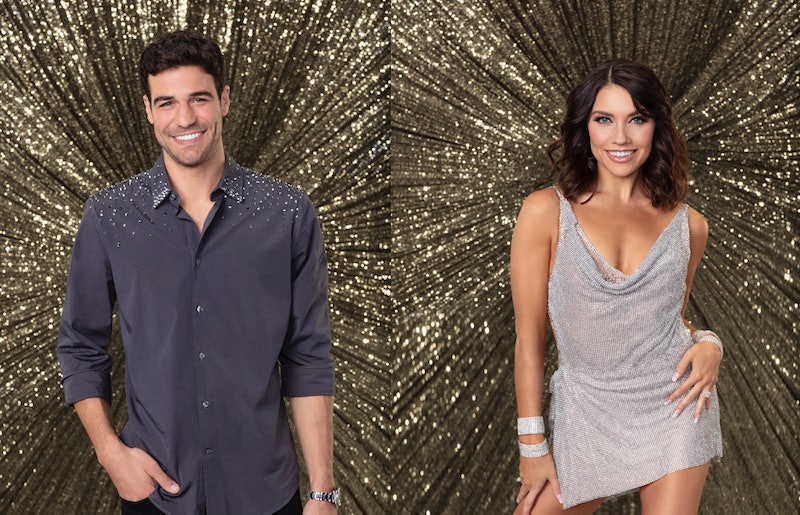 Lest you were still worried about where Kendall and Joe stood after that rocky Bachelor In Paradise breakup, let Dancing With the Stars Season 27 serve as your peace of mind: Kendall cheering on Grocery Store Joe during DWTS is enough to prove their love is still going strong. The 27-year-old taxidermy enthusiast was spotted in the audience during the DWTS premiere on Monday night, where Joe danced the quickstep to Leo Soul’s “Fish Out of Water” with his pro partner, Jenna Johnson. The internet was a bit slow on the uptake — only a few eagle-eyed viewers tweeted about Kendall's appearance — but it's nonetheless a moment for the Bachelor Nation history books.

"Just saw Kendall in the crowd where’s Joe & why isn’t he dancing yet?" wrote one fan alongside that gif — you know the one — of a magnifying glass. Added another: "Spotted: Grocery Store's Joe GF Kendall is in the ballroom! #DWTS."

Joe (whose real last name is Amabile) also referred to Kendall as his girlfriend in his behind-scenes video, saying that "it's great" he got to move to Los Angeles, even if temporarily, for the show because he gets to be close to her. He added that he also "gets to do what [he] aways wanted to do and dance," which seems suspect, but okay Joe, sure! The most surprising part, though? He wants to officially rid himself of the "Grocery Joe" nickname and embrace a new one: Dancer Joe. Doesn't quite have the same ring to it.

"I was eliminated after Night 1 on Bachelorette, and I'm not going to let that happen here," Joe vowed. As for whether or not he can make that happen, the jury is still out: He managed to get through the moves, but he was visibly stiff, and the judges...well, they were less than impressed, giving him a discouraging 14 out of 30.

"I like you. You've got a nice personality and I was really rooting for you...I didn't want you to go wrong, Joe I was...let's move on," said Len Goodman, clearly deflecting. Joked Bruno Tonioli: "You can't have it all. Look at those good looks!"

Still, Joe took it in stride. "It wasn't easy, but you know, we had fun," he said after all was said and done.

No matter how far Joe makes it on DWTS (and let's face it, it's not looking good), he's already given the world a million reasons to love him. There's his charming Instagram food reviews (most dishes average a C+ on his scale), his adorable Chicago accent, and, of course, his awkward but irresistible personality. That may not translate to great dancing skills, and Joe has acknowledged as much: “I never danced, like ever. Even at high school dances and stuff, if I danced, it was very minimum. It was just something I’ve never felt comfortable doing,” Amabile told the Chicago Tribune.

But with all those odds stacked against him, Kendall was still in the crowd supporting her man — and Bachelor Nation was doing the same in spirit, too.