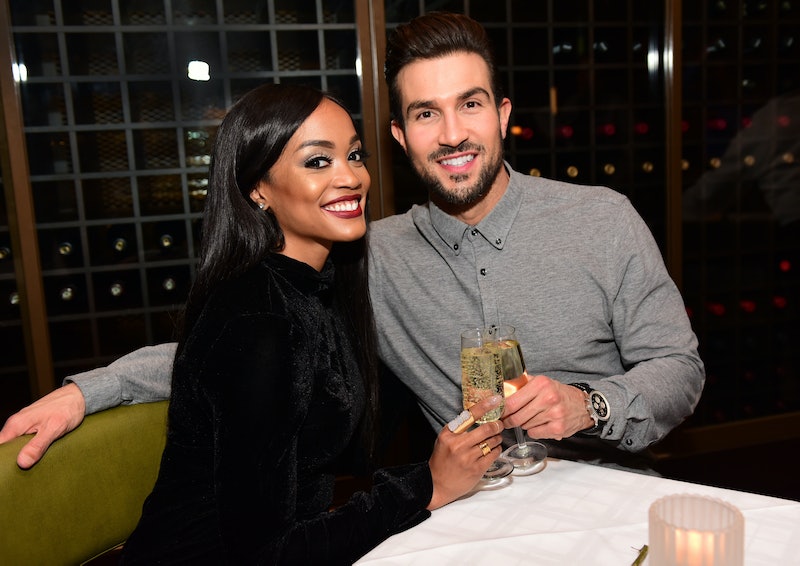 Another Bachelor Nation baby could be on the way soon, according to newlywed couple Rachel Lindsay and Bryan Abasolo. In a new interview with Us Weekly, Bachelorette stars Rachel and Bryan discussed having kids sometime in the near future. This news comes about a month after the pair exchanged vows in Mexico.

“We hope [to have kids] sooner rather than later,” Rachel told the magazine when the conversation naturally turned to the couple taking the next step in their relationship. "We’re not preventing it, but if we’re planning, in the next year.” As for Bryan, he said that he's "as ready as [he’ll] ever be" to become a father. Rachel agreed... to an extent, as she added that she's not sure if they'll ever be truly ready to have children. But the good news is that they're "on the same page in what [they] want."

Elsewhere in their Us Weekly interview, the reality TV stars hypothesized about what kinds of parents they might be. Bryan believes he'll be the more easygoing one, who will spoil their future kids and give them whatever they want. Ultimately, that leaves Rachel with the strict parent title, but she said she's alright with that.

This isn't the first time they've opened up about the subject of kids. Rachel shared a similar sentiment during an interview with Life & Style in June 2019. When asked about adding to their family, the former Bachelorette lead said, "I would like to start before the year is up. So that is kind of soon!” The couple is looking to have a large family, with the reality star even saying, “I want four but that’s not going to happen now probably unless I just pop out triplets — and I don’t want to do that.”

In that same interview, she added, “I mean, as many as we can in a healthy way — just being realistic and being 34, I know women are having children older and older.” And Bryan is on the same about a big family, according to Rachel herself. “Bryan always says he wants to have as many as we can afford, which is such a Bryan answer,” she joked about her partner. “I’m like ‘I want 10!’ and he’s like, ‘As many as we can afford.'”

As mentioned, this recent baby talk comes shortly after they exchanged vows in a romantic ceremony in Mexico. On Aug. 24, People reported that Rachel and Bryan officially became husband and wife, about two years after they originally became engaged on the Season 13 finale of The Bachelorette. Days after their nuptials, Rachel and Bryan opened up about the big day. "I was just thinking, 'Remember your vows, and don’t lose it,'" the bride revealed to the magazine. "But it went by so fast. The ceremony was almost a blur!" According to the groom, there was one specific moment that almost had him in tears: Rachel's vows. Bryan recalled, "When she was reciting, I lost my breath for a second, but I kept it together!"

If Rachel and Bryan do have children "sooner rather than later," they would follow in the footsteps of numerous other Bachelor Nation couples who did the same not long after exchanging vows. Former Bachelor lead Sean Lowe married the recipient of his final rose, Catherine Giudici Lowe, in 2014. The pair now have two children together — 3-year-old Samuel and 16-month-old Isaiah — and another on the way. Bachelor in Paradise lovebirds Tanner and Jade Roper Tolbert exchanged vows in 2016. They've since welcomed two children, 2-year-old Emmy and 2-month-old Brooks.

Rachel and Bryan would certainly be in good company if they take this next step in the near future. But regardless of when they end up having children, there's no doubt the newlyweds will choose the right time for them.