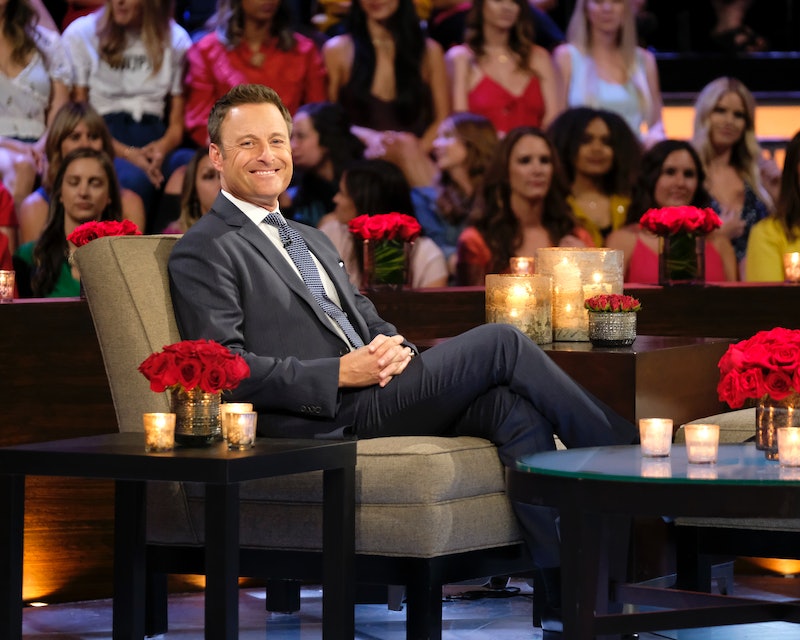 The Bachelorette lead Hannah Brown doesn't seem to be the only person who dated more than one person at the same time. Host Chris Harrison says Peter's ex drama will be explained during the After the Final Rose segment during the finale episode. So far during this Bachelorette season, there have been allegations that Jed Wyatt had a girlfriend during filming, and, on a less extreme end, Peter Weber's ex claimed he broke up with her for the show.

After The Final Rose will air live, so it's tough to predict exactly how it will go down, but since Chris leads the discussions, he has some great insights to share. During a July 25 interview with Entertainment Tonight, Chris declared, "Peter is going to have a little explaining to do. I know more about Peter, just because I did some digging."

Chris Harrison is a private investigator now. Is there anything he can't do? Chris also said, "Because some allegations were made in her claims that had to do with us and casting, so I was just curious so I asked around." Of course, Chris didn't reveal any spoilers, but he doesn't seem to be too worried about Pilot Pete. The Bachelorette host explained, "In that regard, I'm less worried and less intrigued about Peter's situation. Because I know some truths that either I'll explain or Peter will explain."

Whether Chris spills the tea or Peter does so himself, it sounds like the Bachelorette fandom will finally get a satisfying explanation for Peter's ex-girlfriend drama.

In a July interview with Entertainment Tonight, Peter's ex Calee Lutes claimed that he dumped her in December 2018 just because he wanted to join the cast of The Bachelorette. Since Peter hasn't been eliminated from the show, he is unable to do interviews to address these claims.

Still, Chris has an open mind when it comes to the situation. He told Entertainment Tonight, "Peter's ex… has her version… it might be her truth, because that's her perspective of being broken up with is you're hurt and you didn't see this coming. Maybe he did."

Is it time for the After the Final Rose episode yet? Explanations are needed. Chris shared, "I just want to give Peter a chance to talk, because I know some things… and maybe she didn't know. That's the thing too, and if she doesn't know the truth about it, it may have looked crazy to her, or may have seemed crazy."

What could the truth be? Obviously, Chris doesn't have any insight on Peter's old relationship, but he could help Peter clear up the timeline of the Bachelorette casting process.

Chris divulged, "But I know it's kind of more funny than anything, about him and how he was approached by the show, how he was cast on the show, the timing of it all. So I have facts on that that I'm not worried about at all for Peter."

So if Peter was approached by the show to join, maybe, it really isn't as shady as his ex thought since he never actually applied himself. Of course, that's just speculation, but someone needs to break down the order of events. When did Peter break up with his ex in relation to the casting process and, ultimately, going on the show?

Ultimately, Chris concluded, "I'm not too worried about Peter. I will just say there's less of a gray area for me here, as far as Peter is concerned. Jed, I just don't know the situation as well."

Usually, the After the Final Rose episode of The Bachelorette is just so awkward watching the lead talk through a brief relationship months after all parties have moved on. However, there is so much off-camera drama to discuss. Thankfully, it sounds like Chris is more than prepared to get Bachelorette fans the answers they've been craving.