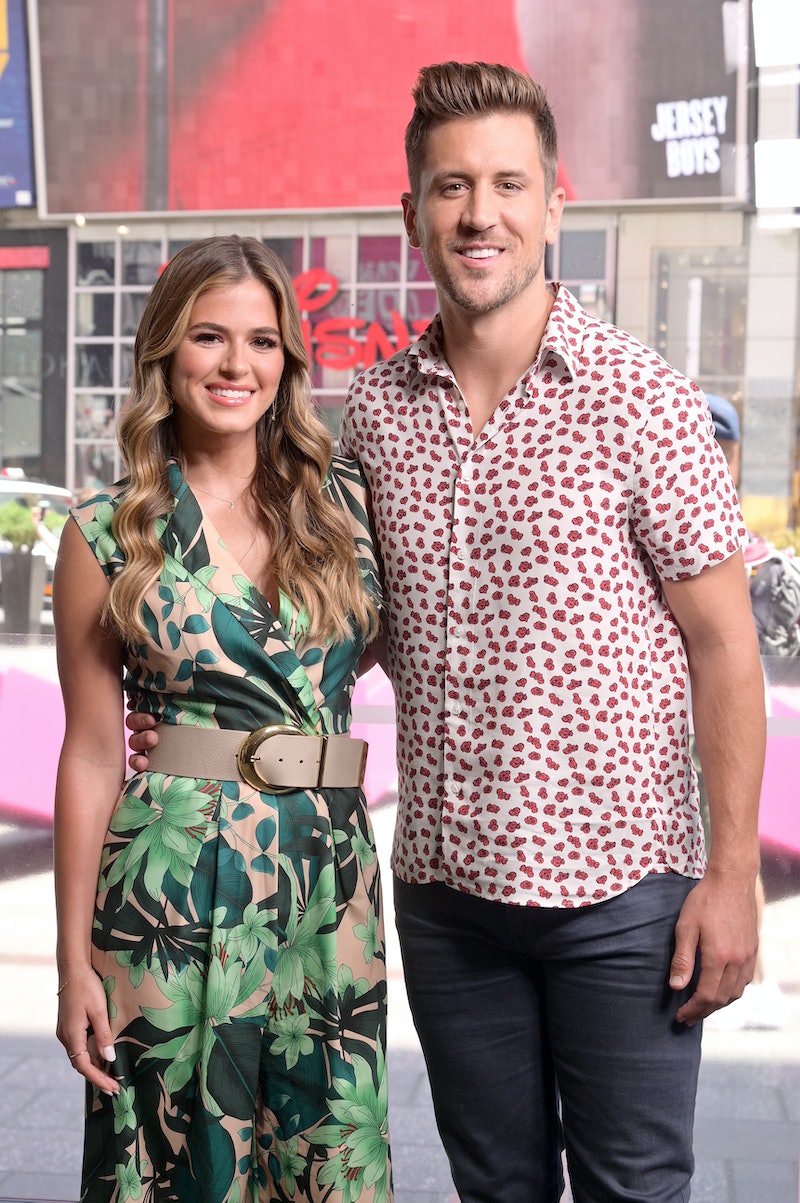 Chris Harrison's signature catchprase is on point when it comes to Hannah Brown's season of The Bachelorette. This just might be the "most dramatic one yet." Not only that, there are also lots off-camera allegations satiating the fandom's need for drama. Recently, The Bachelorette Season 12 couple JoJo Fletcher and Jordan Rodgers discussed ex-girlfriend allegations about Jed Wyatt and Peter Weber.

Since they are both in contention for Hannah's final rose along with Tyler Cameron, the stories are hot topics in Bachelor Nation. Here's a refresher for anyone who's out of the loop or just overwhelmed by the drama.

In a June interview with People, Jed's ex-girlfriend Haley Stevens claimed she was still dating Jed when he went on the show. She claims that she "let" him join the cast and that they planned to get together once filming ended. Then there's Peter's ex, Calee Lutes, who claimed he dumped her in December 2018 to pursue the casting process for this season of The Bachelorette. She shared her story during a July interview with Entertainment Tonight.

What do the future Mr. and Mrs. Rodgers' think of Jed and Peter? JoJo began, "Here’s my take on Peter and the Jed situation. Peter and Jed are two totally different situations."

She continued, "Peter, obviously, not great timing, but [they] broke up before he went on the show. So I think that they’re on two different levels." Then, she theorized, "The show came along. It’s like, ‘This is a good opportunity for me to have that, like, push to break up.’ But I think, if you go on the show with a girlfriend, that is the most awful thing any human could do."

That's when Jordan shared that the first thing he was asked during the casting process was about his relationship status. He emphasized, "That’s the precursor." As it should be. It does make sense to be single going onto a show about dating.

The couple didn't go too hard on Jed, but JoJo did admit that her timeline was similar to Peter's when she went on Season 20 of The Bachelor to pursue Ben Higgins. She revealed, "I had only been broken up for, like, two months, so that, in my mind, I was like, ‘This is really early. Like, can I feel things like this?'" And she did, all the way to the end. JoJo was Ben's runner-up before getting her own season of The Bachelorette.

Jordan emphasized that there are "always sides" to the story. Since Jed and Peter are still cast members on the show neither one of them is allowed to do interviews until this season is over. Peter has stayed mum on his ex's allegations. Jed didn't say much, but Jed did ask people to wait until he could share his side of the story in a July 8 Instagram post.

At this point, all fans can do is speculate and share opinions based on partial facts. Hopefully, there will be some closure with both of these stories when The Bachelorette season finale concludes on July 30.