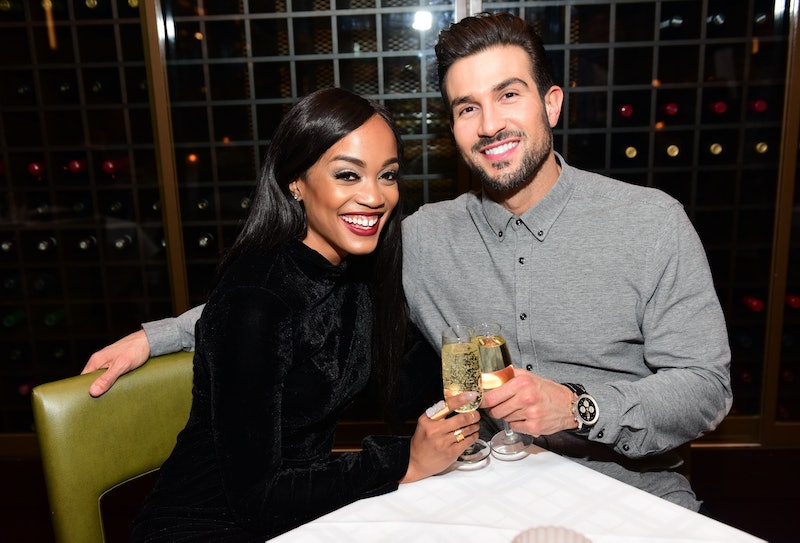 Rachel Lindsay and Bryan Abasolo have been engaged for more than a year, and it looks like the Bachelorette couple is gearing up to tie the knot. Rachel and Bryan are planning a small wedding, People reported on Wednesday. The event won't be televised, but there is a silver lining for fans looking forward to seeing photos from the event. The wedding might be taking place super soon — Rachel told People that she hopes to get married in "the first half of 2019."

"I want very small, family for sure, close friends," Rachel told the magazine of the upcoming wedding's guest list. "I'm going to hurt a lot of feelings, but it’s going to be what we want."

It's easy to have a lot of backseat drivers when it comes to planning weddings. So it's nice to hear that the couple is focusing on spending the big day with the people who are actually important to them. (After all, if a wedding is about inviting loved ones to witness you and your partner's union, it makes sense to include people who are actually close to you, rather than your parents' friends or the distant relatives you haven't seen in years.)

Rachel also shared with People that even though she and Bryan found love through The Bachelorette, that doesn't mean she and her fiancé want to share everything about their relationship with fans. She told the magazine,

"The way we found love, okay, that was public, but the way that we continue our love is very close-knit to us. It's goofy, it's silly, it's honest, it's open. We are very much so a yin and yang."

But even though the two of them prefer to keep the more intimate parts of their relationship to themselves, Rachel has shared other details about the wedding planning process in the past, too. In August 2017, Rachel told The Knot that she wanted a winter wedding, with the couple originally planning to get married in winter 2018.

As far as the specific details, go, it sounds like the Texas-based lawyer has always known she wanted something fairly low-key. "I never had the dream wedding plans," Rachel told The Knot at the time. "I just wanted to find my dream guy, which I've done."

And even though the couple is getting married a bit later than they'd originally intended, it sounds like they've already got another milestone on their minds, too. In July, Rachel said that she and Bryan want kids during an Entertainment Tonight interview. She told the outlet,

"We've been traveling so much, and I want to create this family unit and a home for us. We've been having a great time, traveling, we live together, so we've already done the things, 'Oh, I'll wait two years once I get married' — we're already doing that. So, it's like, why wait?! Let's have kids!"

It sounds like Rachel and Bryan have a great plan in place for their wedding and their future life together: keep things small, have fun, and be open to starting a family. So while they don't have a date set just yet, it looks like this Bachelor Nation couple is more than ready to tie the knot — and their wedding could be here before you know it.