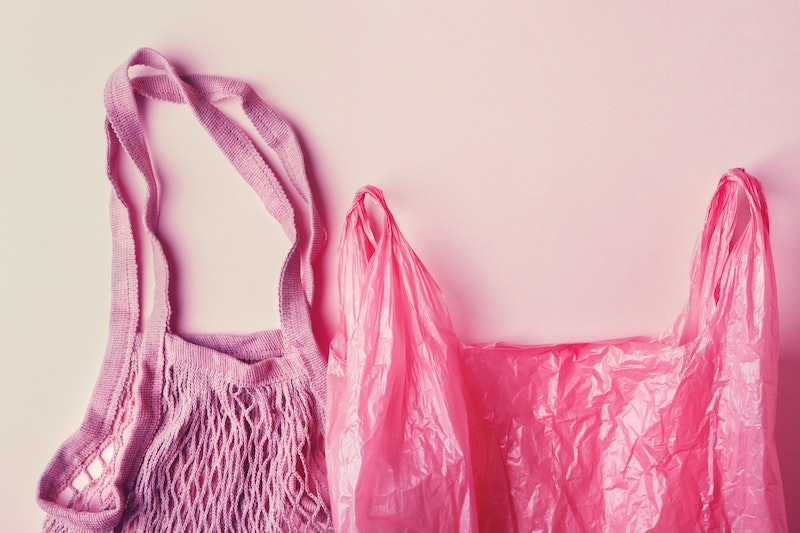 It's been just over four years since the 5p plastic bag charge came into force. And while some people may be bringing their own bags to supermarkets, others have fallen into the habit of buying the slightly more expensive bags for life. This would be fine if people were actually using them multiple times as intended. But a new report has found that the number of bags for life being sold is contributing to, rather than reducing, plastic waste in the UK.

In their second annual study into supermarkets' plastic use, Greenpeace and the Environmental Investigation Agency (EIA) uncovered a pretty worrying statistic. In 2017, the UK's biggest supermarkets used around 886,000 tonnes of plastic packaging. A year later, that figure had risen to 903,000 tonnes. In fact, seven out of the top 10 supermarkets managed to increase their plastic footprint.

In a time where the fate of the planet potentially rests on the human race, what could possibly have caused an increase in plastic waste? Turns out bags for life could partially be to blame, making the news that England had halved its plastic bag usage in a year less applause-worthy.

Some supermarkets reported a huge increase in these sales. Iceland's bag for life sales went from 3.5 million in 2018 to 34 million in 2019. Similarly, Tesco's sales rose from 430 million to 713 million.

The findings have prompted a call for price increases or a complete ban on bags for life. “It’s shocking to see that despite unprecedented awareness of the pollution crisis, the amount of single-use plastic used by the UK’s biggest supermarkets has actually increased in the past year," Julie Phillips, an EIA ocean campaigner, said in a statement.

In Ireland, upping the price of stronger bags to 70 cents resulted in a 90% decrease in sales, notes the report. Greenpeace and the EIA are therefore recommending that bags for life prices be increased from 10p to at least 70p. Failing that, an outright ban should be enforced by the government.

Of course, bags aren't the only thing fuelling supermarket plastic consumption. The packaging involved in "food to go" lunches is still a problem, according to the report. And although some supermarkets are trialling initiatives, such as refill stations, to reduce waste, clearly enough is not being done.

“We hear piecemeal supermarket announcements on plastic every other week, but in reality they are putting more plastic on the shelves than ever,” Greenpeace UK ocean plastics campaigner Fiona Nicholls said in a statement. “Supermarkets need to buck up and think bigger. They must change their stores to offer loose food dispensers, reusable packaging, and move away from throwaway packaging altogether.”

So the next time you reach for that bag for life, think twice. And don't forget to bring your own for your weekly food shop.

More like this
Pret & Costa’s Coffee Is The Strongest On The High Street, According To Which?
By Sam Ramsden
This Is When Netflix Is Going To Start Charging You For Sharing Passwords
By Darshita Goyal
Twitter Has *A Lot* To Say About The "Single Penalty”
By Sam Ramsden
Watch Jacinda Arden’s Devastatingly Honest Resignation Speech
By Sam Ramsden
Get The Very Best Of Bustle/UK
Sign up for Bustle UK's twice-weekly newsletter, featuring the latest must-watch TV, moving personal stories, and expert advice on the hottest viral buys.