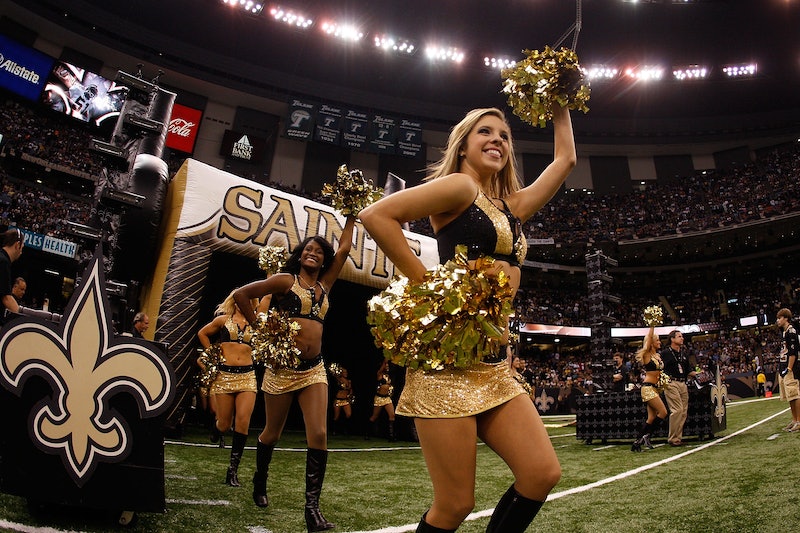 Sexism in the workplace is a pressing issue, and takes many different forms across different industries. In professional sports, for example, a former cheerleader for the New Orleans Saints alleges that the team's social media policy for cheerleaders is discriminatory. The cheerleader, Bailey Davis, filed a complaint with the U.S. Equal Employment Opportunity Commission (EEOC) on the basis of gender discrimination, and in violation of the Civil Rights Act of 1964, according to documents shared with Bustle by Sara Blackwell, Davis' lawyer. Bustle reached out to the New Orleans Saints for comment, and we will update this article when we receive a response.

The New York Times reported 22-year-old Davis had been a team member of the Saintsations, the Saints’ cheerleading team, for three seasons before allegedly being terminated after she posted a photo of herself in a one-piece to Instagram. Davis told The Times that she made her Instagram account private in compliance with team rules, but was accused of breaking them because the Saints “prohibit cheerleaders from appearing nude, semi-nude, or in lingerie.” This incident on social media followed on the heels of reported rumors that Davis had attended a party where there were Saints players — another alleged violation of rules against "fraternizing" between players and cheerleaders, a rule that does not apply to players. When talking to The New York Times, Davis denied she broke either of these rules.

According to the summary of the complaint shared with Bustle, after Davis posted the photo on Instagram, Ashley Deaton, the Senior Director of the Saintsations, reportedly texted Davis, “Very poor judgement to post a picture like that especially considering our recent conversations about the rumors going around about [you]. This does not help your case. I’d expect you to know better.” A few days later, Davis was fired from the Saintsations.

According to The Times, Saintsations cheerleaders are required to follow a strict code of conduct while working for the team. Among the regulations is an anti-fraternization policy: Cheerleaders are expected to avoid all contact with players and coaches, both online and IRL, block all players on social media (despite the fact that many of the players use pseudonyms), and are expected to leave restaurants if players are dining there — even if the players show up after the cheerleaders get there.

Unlike Saints’ cheerleaders, who can be penalized or terminated for fraternizing, the same policies do not apply to the players and coaches, who are allowed to contact cheerleaders without fear of punishment. It is currently unclear whether other NFL teams have similar social media or player-cheerleader fraternization policies.

“It bothers me that they tell me the players know who you are because you’re a pretty girl, you’re on the field with them all the time, but then it’s my fault because my Instagram was public,” Davis told The New York Times.

Moreover, in a statement to The New York Times, Blackwell expressed that the rules for the Saints’ cheerleaders versus the players presented a double standard among the employees. “If the cheerleaders can’t contact the players, then the players shouldn’t be able to contact the cheerleaders. The antiquated stereotype of women needing to hide for their own protection is not permitted in America, and certainly not in the workplace,” she said.

The NFL has not commented on Davis’ claims or complaint. However, Leslie A. Lanusse, an attorney for the Saints, told The New York Times via email, “The Saints organization strives to treat all employees fairly, including Ms. Davis. At the appropriate time and in the appropriate forum, the Saints will defend the organization’s policies and workplace rules. For now, it is sufficient to say that Ms. Davis was not subjected to discrimination because of her gender.”

Though Davis told The New York Times that she is not looking to get her job back, she hopes her complaint will shake up the Saints’ policies, and lead to more equitable treatment of Saintsations cheerleaders.