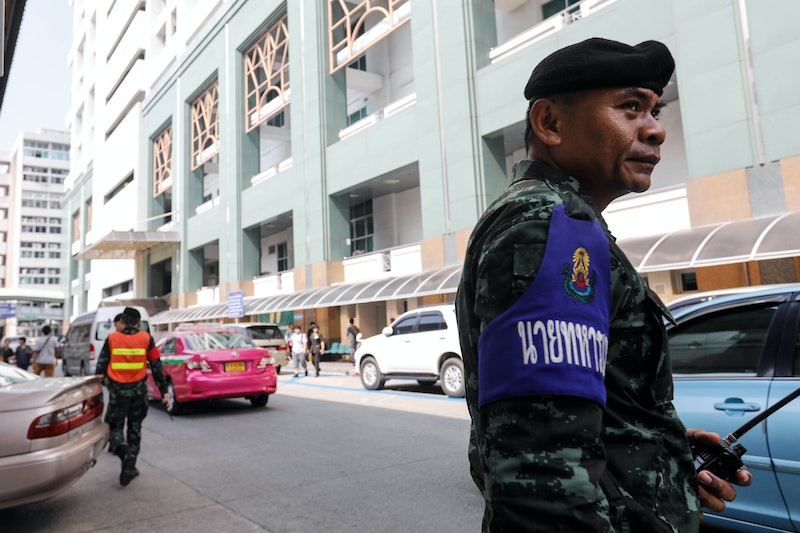 News broke Monday morning of explosions at Phramongkutklao Hospital in Bangkok, leaving at least 24 injured, with 18 requiring hospital attention and three being described as seriously hurt. While the investigation, currently under the oversight of the army, is in its early stages, military officials theorize that the attack may be connected to a string of similar incidents in Thailand.

The motivation fueling the violence appears to stem from political opposition to the country's military regime. The hospital that was attacked on Monday— which notably marked the third anniversary of the coup that brought the current regime to power — was a military-owned facility.

The explosions broke out at roughly 11 a.m. local time in a reception area for retired military officers, where several were awaiting medical care. While officials were initially unsure if the blasts were the result of gas or electrical issues, they soon found a timed pipe bomb, which appeared to have been hidden in a vase. "We found pieces of a circuit and a battery, as well as some wires," said deputy police chief Srivara Ransibrahmanakul. "We'll investigate further but initially we found the explosion had a range of 2-3 meters."

A shopping center in the southern province of Pattani was recently targeted with similar bombs. Roughly 50 people were injured.

The army's commander-in-chief, Gen. Chalermchai Sitthisart, denounced the bombing in a televised statement. “This is the worst ever bombing incident. Normally they do not attack a hospital, even at a time of war,” he said. He went on to suggest that those who targeted the hospital also perpetrated an April attack in front of a lottery agency and another bombing outside the National Theater just one week ago. “All three incidents happened in public spaces, and we believe they all were done by the same perpetrators,” the general said.

In 2014, the military seized control of Thailand with the expressed intention of bringing order and peace to the country. Disarray and conflict has plagued the country since 2006, after a military coup stripped Prime Minister Thaksin Shinawatra of his power — an ouster which angered the working class, which largely supported him. His sister, Yingluck Shinawatra, was put in power in 2007 thanks to a surge of opposition votes. She was ousted in 2013 after angering Thailand's wealthy class of elites after proposing a law that would've granted her brother amnesty.

The military initially imposed martial law after taking control of the country, but got rid of it in favor of a controversial security order granting the army a slew of new powers. Brad Adams, Asia director of Human Rights Watch, deemed the order as "[marking] Thailand’s deepening descent into dictatorship."

Of those wounded on Monday's explosion, 13 were released shortly after being taken to a hospital.