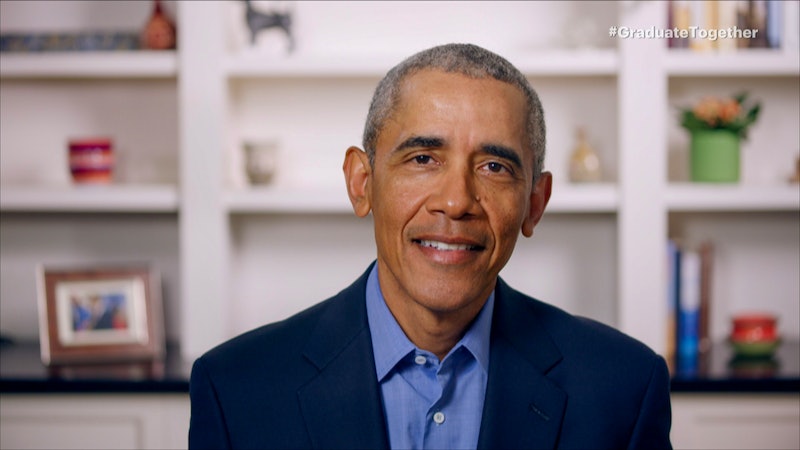 Many high school graduates will miss out on in-person commencement ceremonies, but on Saturday, Barack Obama advised the class of 2020 to "set the world on a different path" during a virtual graduation speech. Obama addressed recent graduates during the Graduate Together: America Honors the High School Class of 2020 virtual event. The 44th president of the United States acknowledged the additional struggles graduates face due to the coronavirus pandemic, but encouraged young people to remain positive and "take charge of your own life."

Obama began his speech with a bit of humor, assuring graduates that the "disappointments of missing a live graduation" will "pass pretty quick." He joked that "not having to sit there and listen to a commencement speaker isn't all that bad — mine usually go on way too long," and in addition, "not that many people look great in those caps, especially if you have big ears like me."

While missing out on the actual event might not be too bad, the former president emphasized that the transition into adulthood these ceremonies represent are what matters. Obama noted that this time is when "you get to decide what's important to you: The kind of career you want to pursue. Who you want to build a family with. The values you want to live by." He added: "And given the current state of the world, that may be kind of scary."

After acknowledging that the global pandemic will make the future more uncertain for many students graduating across the United States, he emphasized how the present situation brought to the surface, "our country's deep-seated problems" including "massive economic inequality to ongoing racial disparities to a lack of basic health care for people who need it." The former president recognized that the current crisis might be disillusioning for young people who thought adults in charge had the answer, when "a lot of them aren't even asking the right questions."

Obama wanted graduates to know that this moment, while scary, can also be "inspiring." He noted that in the wake of the pandemic, even though there is, "so much uncertainty" that lack of a definitive future means, "everything suddenly up for grabs, this is your generation's world to shape." The former president added, "since I'm one of the old guys, I won't tell you what to do with this power that rests in your hands," but did offer, "three quick pieces of advice."

The first piece of advice Obama offered was, "don't be afraid," as "America's gone through tough times before" including, "slavery and civil war, famine and disease, the Great Depression and 9/11." He added that "each time we came out stronger," usually because of "young people like you."

For his second lesson, the former president encouraged graduates to "do what you think is right" and, "ground yourself in values that last, like honesty, hard work, responsibility, fairness, generosity, respect for others." Finally, as a third piece of advice, he encouraged all to, "build a community" and leave behind old and divisive ways of thinking such as, "sexism, racial prejudice, status, greed."

It's not an easy moment to graduate high school, and many students will face uncertain futures long after commencement season ends. But Obama's speech encouraged graduates to have hope and fight for a better future despite the current circumstances, noting, "In so many ways, you've already started to lead."

More like this
Man Meets Politics: ‘Boy Meets World’ Star Ben Savage Is Running For Congress
By Jake Viswanath
Hannah Ann Got Engaged 3 Years After 'The Bachelor' & The Proposal Was Dreamy
By Grace Wehniainen
We Finally Have Some Answers To How Heather Gay Got A Black Eye On 'RHOSLC'
By Samantha Rollins
At 28, Rosie Perez Risked Her Career To Stop Playing Stereotypes
By Gabrielle Bondi
Get Even More From Bustle — Sign Up For The Newsletter
From hair trends to relationship advice, our daily newsletter has everything you need to sound like a person who’s on TikTok, even if you aren’t.