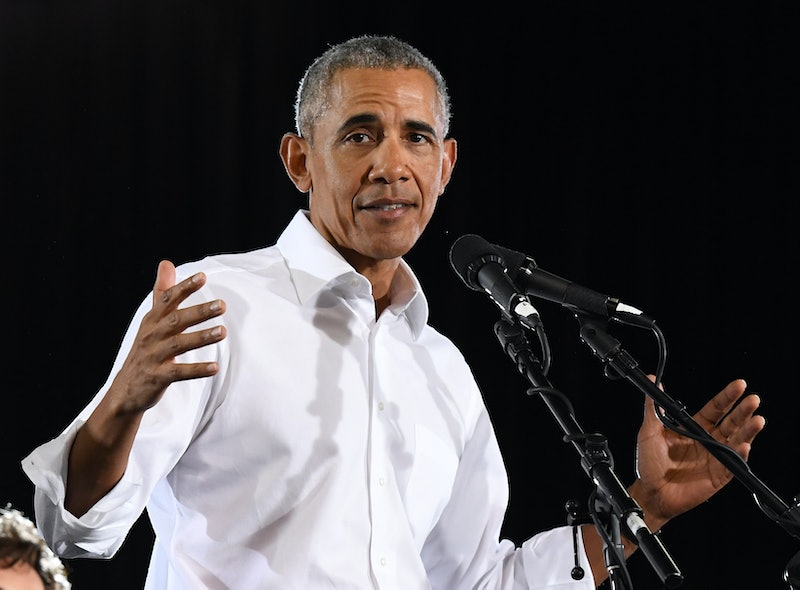 For the last several years, We The People have been blessed with a glimpse into the life of a former President by way of his seasonal playlists. They usually include the biggest names in music today, as well as some oldies-but-goodies — and this year proved no exception. Barack Obama's summer 2019 playlist has arrived, ladies and gentleman, and it is good. Like, really good. No one is more excited about it than the artists who made the cut, though, and they've been sharing their reactions on social media ever since it came out.

On Saturday, Aug. 24, Obama posted a list of 24 tracks that he and Michelle have been enjoying lately. "With summer winding down, here’s a sampling of what Michelle and I have been listening to — some new, some old, some fast, some slow," he wrote in the caption on both Twitter and Instagram. "Hope you enjoy."

Among the artists who scored a coveted spot was Lizzo, whose song, "Juice," came in at number six. Shortly before the playlist was released, the star actually penned a tweet about Obama — which now seems pretty serendipitous — and said that he was the first president she was able to cast a ballot for. "I was so proud of my right to vote," she wrote, "and I will never take it for granted."

Just sixty minutes later, Obama shared his playlist, and Lizzo legit could not contain her elation. "I TWEETED THIS AT 10:26AM AND ONE HOUR LATER PRESIDENT @BarackObama TWEETED ABOUT ME!!!" she exclaimed. "WE’RE FRIENDS NOW I DONT MAKE THE RULES!!!"

Of course, Lizzo wasn't the only one who expressed her excitement about the whole thing on social media. Rapper 2 Chainz revealed that meeting Obama has totally been on his "bucket list," but then conceded that having his song, "It's A Vibe" on the Obamas' playlist would "most definitely work for now." Yeah, that's a probably a pretty good place-holder.

Rising star Maggie Rogers made the cut for "Burning," as did musicians like Drake, Shawn Mendes and Camila Cabello, and SZA. Older bands like Steely Dan, The Rolling Stones, and Toots and the Maytals got love from Obama, too, which further proves his most excellent taste in music.

All of the artists who've reacted to being on Obama's playlist truly seem humbled by his shout-out — and understandably so. Scroll through below to see what some of them have had to say.