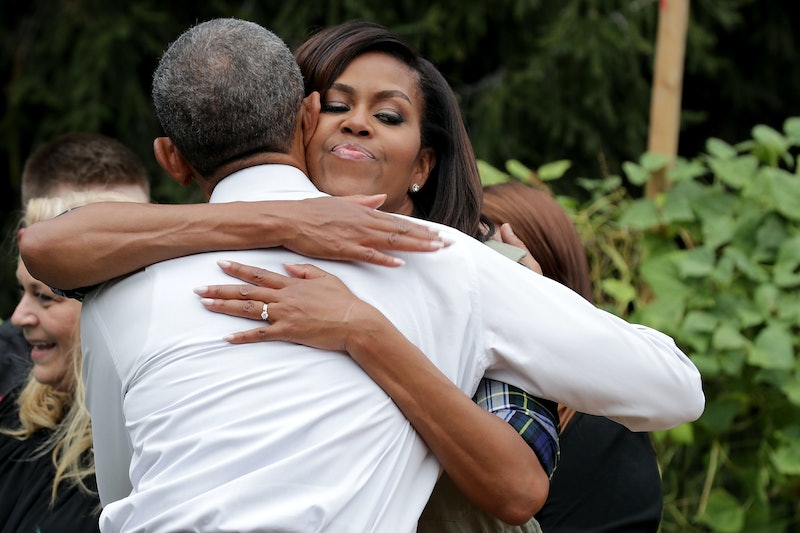 If you ever saw the Obamas together, then you know how close they are as a couple. During their working lives, though, Michelle Obama said in her new memoir Becoming that they tend to stay separate — with some notable exceptions. Barack Obama called Michelle into the Oval Office only once unexpectedly during his eight-year term in office — and it wasn't for a happy event.

"My husband needed me," Michelle Obama wrote in Becoming. "This would be the only time in eight years that he'd request my presence in the middle of a workday, the two of us rearranging our schedules to be alone together for a moment of dim comfort."

The moment she's referring to was the shooting at Sandy Hook Elementary School in Newtown, Connecticut, which took place on Dec. 14, 2012. When news of the shooting took place, Obama wrote, she was giving a speech, so her aide told her about it when she was done.

"The news Tina gave me was so horrifying and sad I could barely process what she was saying," Obama wrote.

And at the same time, her aide also told her that Barack was requesting that she come to the Oval Office immediately — not for work, but for comfort.

"When I walked into the Oval Office, Barack and I embraced silently," Obama wrote. "There was nothing to say. No words."

Sandy Hook was the second deadliest mass shooting that had ever taken place in the United States when it happened, according to CNN. It claimed the lives of 20 children and six adults at that single elementary school, shaking the community to its core and the country along with it. As Obama explained in the book, Barack had not experienced the shooting as closely as the first responders, the school community, or the victims' families, of course. His position as president, though, meant that he had to get a thorough briefing on the situation, and it was a difficult one for a man who loved children so much.

"I could see in his eyes how broken [those images] had left him, what this had done already to his faith," Obama wrote.

"Staying upright after Newtown was probably the hardest thing he'd ever had to do," Obama continued.

Barack himself backed up that claim in an interview later on, when he said that that had been the worst day of his presidency, according to Business Insider. During his press conference, he offered a message of support for Newtown, while also expressing his heartbreak. As Obama wrote and as video shows, Barack was unable to hold back tears. In his message of "resolve," as the former first lady described it, there was also a sincere hope — which, in the future, would only compound the tragedy of the day.

"The best he could do was to offer his resolve — something he assumed would also get taken up by citizens and lawmakers around the country, — to prevent more massacres by passing basic, sensible laws concerning how gun were sold," she wrote.

Citizens have organized, and some lawmakers did pick up the issue — but Congress hasn't passed any meaningful gun violence prevention legislation since Sandy Hook. This was the worst day of Barack Obama's presidency, the only day when he needed Michelle Obama to come meet him in the Oval Office — and it could still happen again.