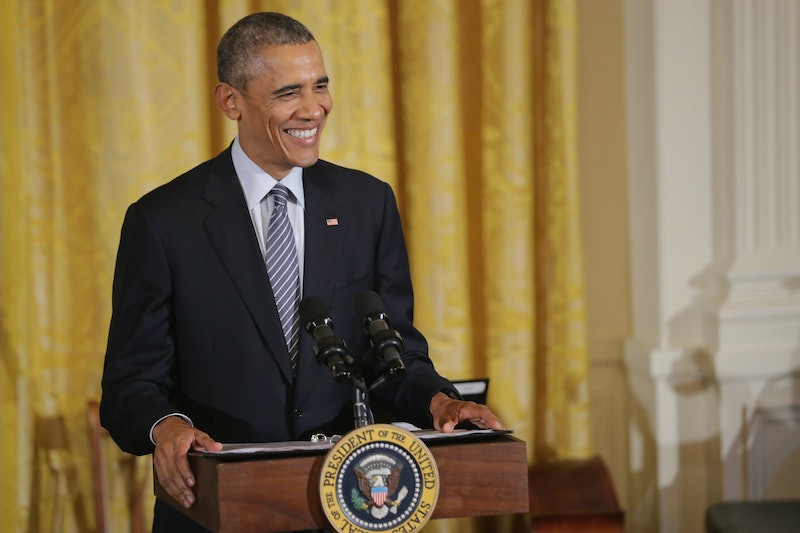 During Barack Obama's tenure, Lin Manuel Miranda came to the White House twice to present his smash Broadway hit, Hamilton — first when it was just a developing spoken-word poem, and later with the whole cast once it had already become a worldwide sensation. Given former President Barack Obama's support for the show, then, it makes sense that he would collaborate with Miranda on the "Hamildrop" project. Now, Barack Obama's Hamildrop cameo earned him a surprise success that he hadn't seen before as president: a spot on the Billboard charts.

For each month of 2018, Miranda released a remix from Hamilton to make up the Hamildrops series, each one featuring one or more musical artists who added their signature twists to the now-beloved songs. It was a pretty varied group of collaborators, from "Weird Al" Yankovic to Sara Bareilles to The Decemberists. The last song, which dropped in December, was called “One Last Time (44 Remix)” — and the 44 isn't just there for show. Although you won't get to hear his singing voice, the 44th president turns up in the middle of the song to read George Washington's final address as president. At the same time, Broadway actor Christopher Jackson (who played Washington in Hamilton) and gospel singer Bebe Winans provide the musical elements of the song.

As president, Obama reached an especially high level of celebrity status, and he and his family have often made forays into the world of pop culture. Obama became a part of several viral videos, and former First Lady Michelle Obama occasionally followed her husband's lead on that front. Most recently, she turned heads all over the word with a pair of gold Balenciaga thigh-high boots she wore to a speaking engagement. Now, the former president has earned a considerable amount of attention with his work on this remix — and it came with recognition he never got in the White House.

Obama's Hamilton remix debuted on Dec. 21, and the Jan. 5 Billboard Hot R&B Songs chart reflected its success. “One Last Time (44 Remix)” currently holds the 22nd spot on the chart, after selling 9,000 downloads in its first week and 307,000 on-demand streams in the United States, according to The Hollywood Reporter.

This actually isn't Obama's first time on the Billboard charts, but according to The Hollywood Reporter, the charts he previously appeared on no longer exist. A movie of his inauguration, A Moment in History: The Inauguration of Barack Obama, made it to number 6 on the TV DVD Sales chart in March 2009. Later, JX Cannon's "Pop Off," which also featured Obama, made the Billboard + Twitter Emerging Artists list at number 10 in December 2015.

Billboard's Hot R&B Songs list, however, is a much more important institution in terms of noting musical success. You may not get to see Obama drop his own album, but his part in this song was an important one — and in reading an excerpt from George Washington's farewell address, Obama could just as easily have been speaking for himself. With this song's success and his friendship with Miranda, perhaps you'll at least get to see a similar collaboration in the future.

More like this
What Is Barack Obama’s Net Worth? He Makes *Way* More Now As An Ex-President
By Hugh McIntyre
Cardi B Explains To David Letterman Why She Uses Her Star Power For Politics
By Jake Viswanath
President Zelensky Spoke Out On Ukraine's Chances Of Hosting Eurovision Next Year
By Sam Ramsden
Michigan’s Governor Is “Going To Fight Like Hell” To Protect Abortion Access
By Andrea Zelinski
Get Even More From Bustle — Sign Up For The Newsletter