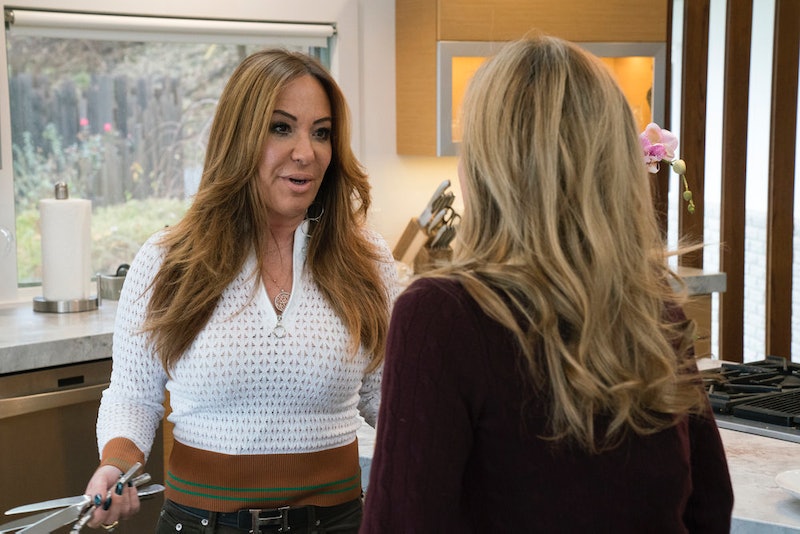 If you're a fan of The Real Housewives of New York City, you probably wanted Barbara Kavovit to leave at some point this season. Not because you had anything against her, but because she was on an ill-fated mission trying to break into this cast. When Kavovit considered leaving the Miami trip after three of the other women told her she had "negative energy", it was hard not to think: Yes, leave! Save yourself!

But Kavovit stayed, made it through the entire season, and even did the reunion taping. And now that it's over, you better believe she has no interest in being promoted.

"Originally, I would say no," Kavovit says of returning to the show at all. "But I'd always consider it and hear what they want to say. You know, in the capacity as a Friend, but I could never see myself as a Housewife."

More than any other Real Housewives cast, RHONY is a tough group to join. The women all have complicated, years-long relationships, and with the exception of Carole Radziwill's departure, the cast has been the same for three years. On top of that, Kavovit joined as a friend of Luann de Lesseps, who all the other women were at odds with this season.

"I think it was very difficult to be embraced by the group and I felt like an outsider a lot of the time, because it is pretty easy to see that I am different than the other women," Kavovit explains. "I think that they could've tried a little harder because there were six of them and one of me."

Did dealing with this mean that she did have "negative energy" in Miami? "I just felt really sad, so, I mean, if the sadness is construed as negative energy," she says. "Again, they didn't really want to get to know me. They didn't really take the time to understand, What is Barbara's life? What does she do?"

While things didn't go so smoothly, Kavovit is in a positive place with some of the Housewives now, particularly her old friend de Lesseps. "We did have our bone of contention, but we worked it out," she says. As for the others, "Tinsley, we are on good terms. Bethenny, we are. I don't talk to Ramona, and I haven't talked Dorinda in a while."

So, Kavovit, obviously, wasn't there to stir up drama or infiltrate the group by any means necessary, but she did have a clear purpose in joining the show. "I think being on RHONY was a great launchpad for Heels of Steel and that's why I did it," she says of her new novel, out June 25. The book is based on Kavovit's own life starting a construction business in her early 20s and growing it into huge company.

While a lot of the situations in the book, including stories of harassment, difficult high-profile clients, and disrespectful employees, really happened to her, Heels of Steel is fiction. "I really wanted to be able to explore things without getting people in trouble," Kavovit says with a laugh.

The book might have just come out, but the first-time novelist is already working on a sequel ("I see three books coming out of it right away") and is working on getting the story adapted into a movie or TV show. She can't share any details yet, but if she could have her way she'd love for Jennifer Lopez to play the lead character, Bridget. Makes sense. Like Kavovit — and Bridget — Lopez is from the Bronx.

Kavovit's book is on shelves and filming for RHONY is over, so her journey is complete — at least for now. But fans still have the reunion episodes to watch. Kavovit can't speak to everything that happens on those iconic couches, but she says the section she was a part of was "pretty intense."

"I saw a lot of mean spiritedness going on, and that's the part of doing the show that I don't really like, because I'm not naturally a mean person, so it's hard for me to go there or to even get there." She adds, "And the show for all the women is priority, that's how they earn their living and that's not how I earn mine, so."

That statement feels like it could inspire a tagline ("I earn my living with drywall not drama"?), but now we know we'll never see the day. It still remains to be seen if the construction mogul will be back at all, but seeing how honest she is about her intentions, we'll know the reason why if she does return: Kavovit is a go-getter and those sequels aren't going to promote themselves.