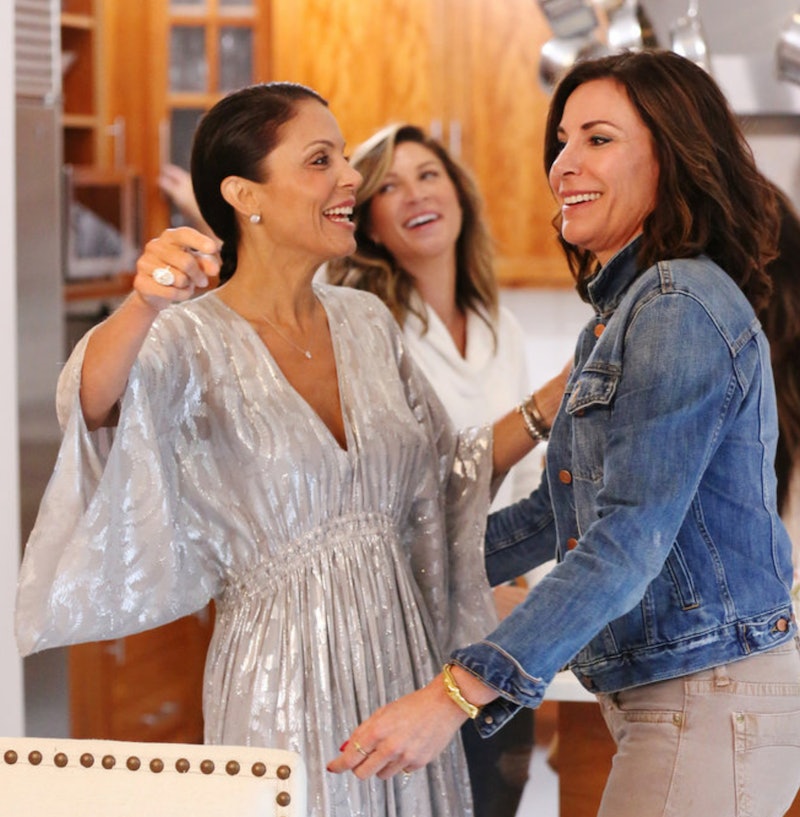 We've got a Real Housewives of New York City clip! Clip! Clip! On Wednesday, April 24, E! News shared the RHONY Season 11 midseason trailer. And yes, it is very good. (But come on, like you'd expect anything less from this cast?) There are laughs, there are drunken shenanigans, and there's a snippet of an argument between Luann de Lesseps and Bethenny Frankel that will make you want to grab the comforter out of the Fish Room and cover your face.

But before we get to the argument scene, we see Luann back in the studio and recording a tribute to Jovani gowns. In another scene, a presumably hammered Sonja Morgan thinks Clinton (Bill? Hillary? Eastwood? Kelly?) is the current president. Dorinda Medley cries about a boat. Tinsley Mortimer welcomes circus-goers to the Big Apple Circus. Ramona Singer molds a glob of clay into the shape of a wiener. Luann shows Bethenny the oven that is in one of her guest bedrooms. You know, your garden-variety RHONY trailer material.

And then, we see a piece of a fight between Bethenny and Luann in the middle of a restaurant. We only get to see 15 seconds of this scene, but whew, what potent 15 seconds they are. The clip begins with Bethenny yelling “Every day it’s about you” at Luann across a table, to which Luann calmly replies, “Look at you." This prompts Bethenny to hold a metal martini glass up to Luann’s face and shout “Look at the f*cking mirror! Look at yourself!” She adds, through clenched teeth, that Luann never reached out about her late boyfriend, Dennis Shields. The preview ends on Bethenny sobbing and muttering “I don’t know what’s happening.”

I don’t know what’s happening either. How did we go from Bethenny helping out with Luann’s intervention to Bethenny waving a metal cup around at Luann in public in only a matter of months? Sure, there has been a ton of tension between these two simmering beneath the surface this season (and, you know, every other season), and sure, it did feel like only a matter of time before the Fish Room stew bubbled over, but jeez. I did not realize that argument about the Blue Stone Manor room situation and those jabs about Luann’s cabaret show were going to lead us to something this heated.

Then again, this should not come as a surprise; this is Bethenny and Lu we are talking about. Their friendship timeline is about as even-keeled as a trip on the Boat Ride from Hell, and they would probably be the first to say so. “Bethenny and I have always had a tumultuous kind of relationship,” Lu told Reality Blurb back in February. “So, it has its ups and downs but at the end of the day, we respect each other.”

All that said, Bethenny and Luann’s friendship sure seemed to be in a solid place at the top of the season (they hung out in the Hamptons! Bethenny helped Lu and Dorinda mend fences! they laughed at the lobster incident!). Alas, it looks like it won't be long before the cracks in their dynamic begin to show and it starts to feel Season 8 trip to the Berkshires all over again. Let's hope Luann and Bethenny are able to make it nice.