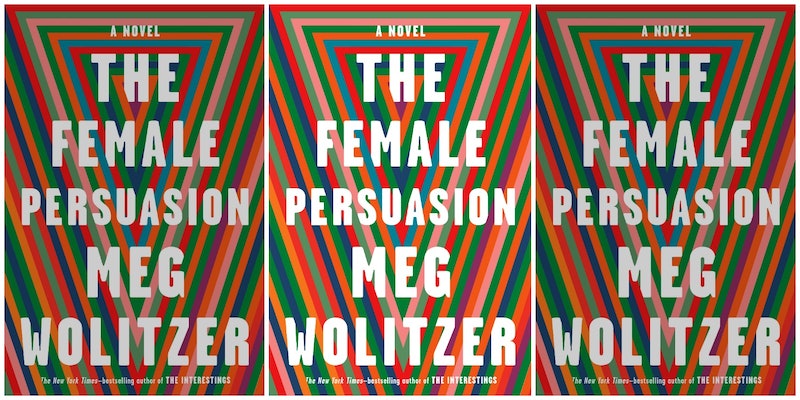 On Monday, Barnes & Noble announced the formation of a seasonal, in-store book club, and Meg Wolitzer's The Female Persuasion is the first-ever Barnes & Noble Book Club pick. Discussions will be held at each of the 600+ stores nationwide, beginning on the night of May 2. Better yet: admission to the event is free, and you'll even get a free coffee, hot or iced, and a free cookie from the café, just for attending.

Barnes & Noble didn't have a great holiday season in 2017, and the effects of poor sales figures have shown in the first few months of this year. In February, the retailer laid off lead workers without warning, saying that the move "adjust[s] staffing so that it meets the needs of our existing business and our customers." Layoffs aren't the only change Barnes & Noble has made to stay afloat over the last few years, as competitors Waldenbooks, Borders, and Books-a-Million have shuttered and downsized. With Amazon opening its own physical bookstores, Barnes & Noble launched several concept stores featuring bars and restaurants in 2017.

The Barnes & Noble Book Club is the latest of the retailer's efforts to stay in business in the age of Amazon. In addition to hosting book club meetings, Barnes & Noble will sell special-edition copies of its book club picks, each of which will "includ[e] a special Reading Group Guide and an essay by the author," according to the press release. The Female Persuasion book club edition is already available for pre-order on the Barnes & Noble website.

Meg Wolitzer's The Female Persuasion centers on Greer, a shy college student who becomes enamored with the fiery, feminist rhetoric of visiting speaker Faith Frank. Years later, Greer goes to work for Frank at the Loci Organization. But as other areas of her life begin to crumble in the dream job's wake, Greer finds herself growing disillusioned with Frank and the Loci Organization, as she discovers that even her heroes are imperfect people.

If you've ever participated in a book club before, you know how annoying it can be to suffer through that one person who knows just everything there is to know about a novel because its their favorite. Thankfully, The Female Persuasion doesn't hit store shelves until April 3, which means that everyone who participates in the Barnes & Noble Book Club will be reading it together for the first time. You can order your copy today, and join in with the rest of the Barnes & Noble Book Club when its inaugural meeting takes place on May 2 at 6 P.M.