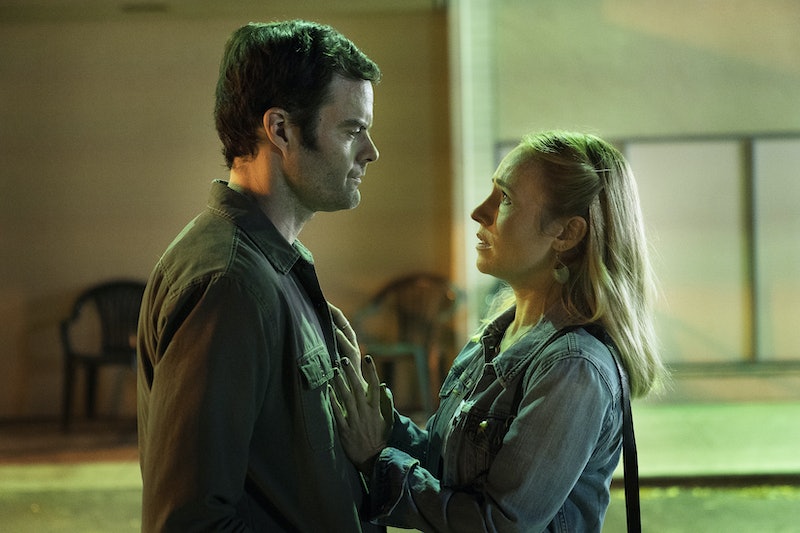 HBO's Barry has always been about a man who wants to become a better person. The entire premise of the dark comedy is that its titular character wants to leave behind his life as a hitman and pursue a real passion — theater. Thus far, he hasn't been able to shake his criminal past, but Barry and Sally's relationship on Barry might be just the push he needs to find a way out once and for all.

After the mayhem of last season, Sally and Barry are securely in a relationship, and that starts to mean more than ever in this week's episode. After a series of frustrating meetings with her agency, Sally tells the acting class that she's upset she's only receiving parts of nameless housewives and quiet office assistants, rather than playing "strong" women she would rather be. When Gene prompts her to dig a little deeper into what she's actually saying, she reveals that she was in an abusive marriage, and is worried about being perceived as weak because she stayed with him for years.

"I am not weak. I left, OK? I moved to L.A. to live for me, and now I stand up for myself, and I don't apologize, and I am with someone who respects and accepts me for who I am," she says. "I will never, ever be with a violent man again."

That last line is what hits Barry, who's listening from the audience, the hardest. And later, when he heads out to do a hit for NoHo Hank, it's Sally's declaration that she'll never be with a violent man that's ringing in his head as he decides to spare the target's life.

Barry doesn't want to stop killing only for Sally — he's outlined reason after reason why he can't live like this anymore. But if the prospect of losing someone he loves is the only thing that can truly get through to him, he might be able to actually stick to the change for good.

This decision to spare the target after Sally's speech could have major consequences for Barry. He knows that if Hank finds out he didn't make this kill, he'll no longer be protected. Hank will tell the Bolivians that Barry is the one who killed Goran, and Barry's life will be at risk more than ever. Yet he makes that difficult decision, ultimately risking his life, all to be the man that Sally thinks he is.

It likely won't be as simple as he hopes — the power of ~love~ isn't going to save Barry from the wrath of the Bolivians, or the police who are on the hunt for Detective Moss's killer, or the Burmese, who he appears to have also angered this episode. And even though their relationship is fairly peaceful for the time being, Sally still has no idea what Barry's true past is, and something tells me she would be quick to leave if she does find out. A real, lasting relationship can't be built on lies.

But even if Sally isn't Barry's endgame, it doesn't really matter — they're both deeply flawed, haven't really set up to be each other's soulmates, and could pretty easily split without changing the essence of the show too much. The point is that her words have stuck with Barry, and he knows he can't carry on killing and ever truly be the man he wants to be for a partner, no matter who it is. Only time will tell how he untangles himself from this web of murder and secrecy, but hopefully he's inching closer and closer to the light at the end of the tunnel.

More like this
If 'Entergalactic' Season 2 Happens, You Could Get A New Kid Cudi Album
By Kadin Burnett
Here’s Where You Can Stream 'Schitt's Creek' After The Comedy Leaves Netflix
By Brad Witter
'Ramy' Will “Probably” End With Season 4, According To Ramy Youssef
By Brad Witter
'Reservation Dogs' Season 3 May Finally Mend Bear & Willie Jack’s Relationship
By Gretchen Smail
Get Even More From Bustle — Sign Up For The Newsletter