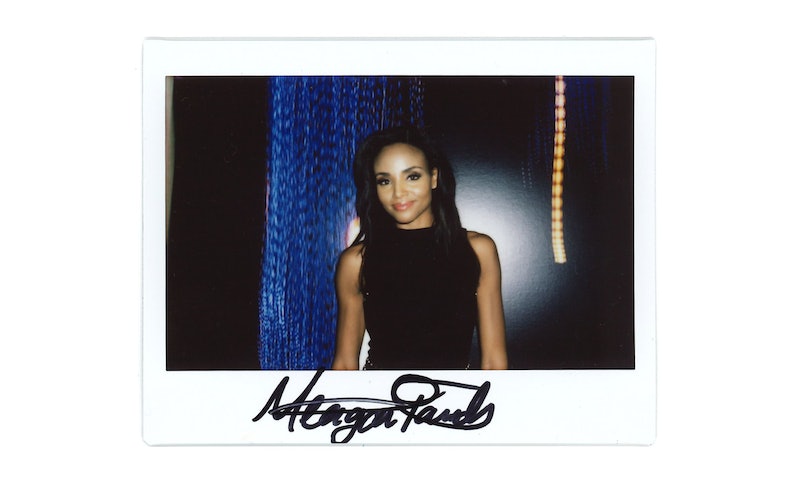 When celebrities hang out with Bustle writers, we want to give them the chance to leave their mark. Literally. So we hand them a pen, a piece of paper, a few questions, and ask them to get creative. This time, Batwoman star Meagan Tandy is leaving her mark in the Bustle Booth.

Meagan Tandy is all smiles as she tries to decide what she likes most about starring the CW's Batwoman alongside Ruby Rose. She concludes that the "really awesome" thing about Batwoman is that the show's message of personal growth, living your best life, and owning your values falls right in line with the work she does offscreen through her foundation.

The former Teen Wolf star is talking about Empire Girls, a program that seeks to empower young women "to find their truth and to live in it," she says, which just so happens to also be the theme of her new CW series. Batwoman opens with Kate Kane (Ruby Rose), returning to Gotham only to find her ex-girlfriend, Sophie, played by Tandy, married to a man. Along with saving the world, a "will they, won't they" romance is at the heart of the series.

"I'm just so passionate about motivating and inspiring [young women] to just be the best version of themselves. What's really cool is like if I were to be friends with Sophie in real life, I would be trying to mentor her to do the exact same," Tandy says. It's not really until Kate comes back to Gotham that Sophie starts to realize she might not be living her truth, she adds.

In the pilot, it's revealed that when Kate and Sophie were younger and in love, they were forced to split up because their military academy wouldn't allow same-sex relationships. Kate refused to sign a document claiming she was not gay and dropped out of school, but Sophie signed it and stayed. Tandy says she's proud to tell the story of an "out lesbian superhero" but also depict the more recent history of LGBTQ rights.

"It's important for today's day because it's important for people to know the struggles of the LGBTQ community. You guys will get to see my character kind of go up and down through these emotions of figuring out like, 'Do I stay with the man or do I go with the girl? I mean, what does society want me to do?' I just feel like it's a really relatable story to a lot of people today and I think a lot of people can hopefully just be able to open their hearts and understand," she says.

Tandy adds that she hopes young women find a role model in her character. "I just love the fact that she is this really, really, really strong, capable woman," she says, noting that Sophie also has a "really sweet vulnerable side that literally only comes out when Kate Kane returns."

Find out what else Tandy is looking forward to fans seeing on her new show in her Bustle Booth below.