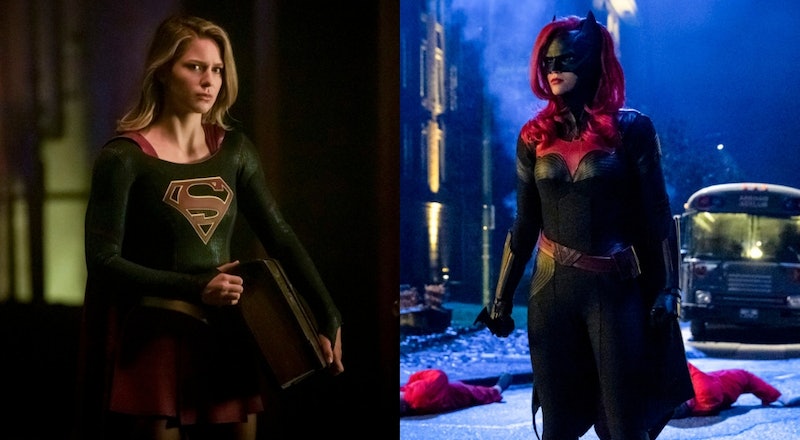 Spoilers ahead for Night 2 of the Arrowverse Elseworlds crossover. During Monday night's special episode of Arrow, Oliver, Kara, and Barry set off on their great adventure to Gotham City. While there, they met Kate Kane, who helped them retrieve a powerful and mysterious book from John Deegan, and it didn’t take long for Kara to connect the dots about Kane’s true identity as Batwoman. A ton of action went down, but Batwoman and Supergirl in the Arrowverse Elseworlds crossover caused quite the stir off-screen.

In the episode, Kara, Oliver, and Barry are perusing the streets of Gotham when they get into an impromptu fight with a few criminals that ends with the trio in jail. They are bailed out and taken to Bruce Wayne's headquarters, which confuses everyone because he's been MIA for about three years.

To their surprise, the person who got them out is actually Kate Kane, who wants to help them find what they are looking for... so that they'll get the hell out of her city. Kara decides to suit up and investigate, but she runs into Kate on the way out. She apologizes for prying about Bruce Wayne/Batman earlier, and Kate reveals that Bruce Wayne is – you guessed it – her cousin.

According to Kate, she's developing a real estate business in his absence. Of course, Kara quips about her own cousin being a frenemy of Bruce Wayne and notes that Kate doesn't fit the typical corporate billionaire look with her tattoos and casual attire. Kate approaches her with a smile and hints that there are more tattoos than the eye can see, which causes innocent Kara to blush and stammer over her words. Yep, you can cut the chemistry with a knife here.

At the end, Kate suits up as Batwoman and helps the trio retrieve the book. Batwoman and Supergirl share a moment where they acknowledge that they both know each other's true identity. Predictably, Twitter erupted as a thousand ships set sail for this superheroine couple.

Actress Melissa Benoit spoke to Comic Book Resource about her scenes with Ruby Rose and said their characters' almost-parallel histories helped them form a quick bond. "Their scenes are really nice because of their similarities," Benoit explained. "Kate Kane is Bruce Wayne's cousin and all these things so they really relate on a lot of levels that I don't think Kara's found yet in another female superhero. There's a really deep understanding from the get go between the two of them."

The relationship between these characters may just be getting started on TV, but their comic book roots run deep. Per Book Riot, Supergirl and Batgirl first teamed up in World's Finest Comics #169 in September 1967. Of course, their history quickly got muddied as different versions of the characters popped up and others died off. But, 1997's Elseworld's Finest: Supergirl & Batgirl is a shipping fan's dream because it's an alternate history where Superman and Batman don't exist, so they get to team up and shine all on their own.

It remains to be seen how things go down with Supergirl and Batwoman in the future, but fans are going to be watching all their interactions in hopes of a romantic spark. Let the fan fiction stories and headcanon begin!