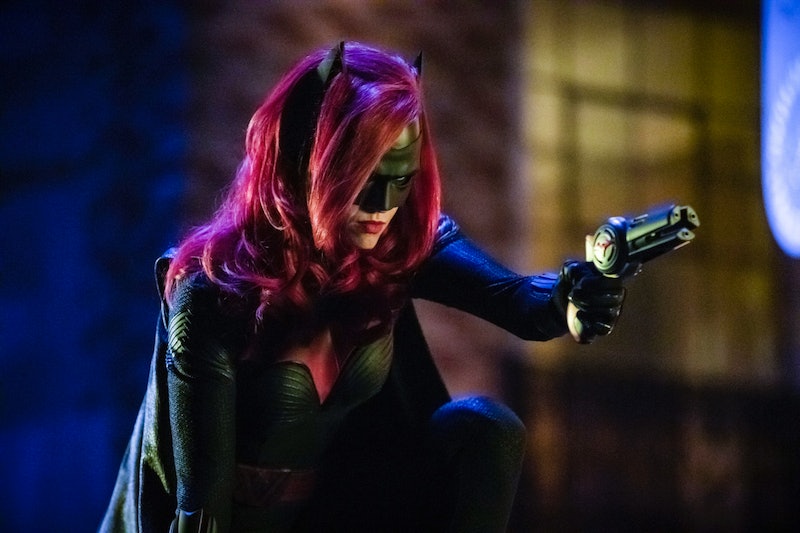 Spoilers ahead for Night 1 of the Arrowverse Elseworlds crossover. Oliver Queen may have a reputation on Arrow for being a dark and brooding vigilante, but he's nothing compared to Bruce Wayne. And as Batwoman's debut nears, it's only natural that Batman would make an appearance in the Arrowverse, too. But while The Flash teased the Dark Knight's crime-addled Gotham City, the man himself does not appear to be home.

Wayne has been mentioned on The Flash and Arrow before, but Batman doesn't appear to be a thing on their Earth. At the very least, not a thing that makes a lot of headlines. It's highly possible that Batman is dealing with his own enemies while Barry and Oliver fight metahumans.

At the end of the first Elseworlds crossover episode, Oliver (who is body-swapped as a speedster) announces to Barry (who is the Green Arrow), Kara, and Clark that they're going to Gotham. Field trip! Finally, some answers. Then, in the final moment, we see Batwoman standing on top of a building, surveying the city and ready to answer their signal.

That's Batwoman, also known as Kate Kane and played by Ruby Rose, not Bruce Wayne. According to Entertainment Weekly, Kate is the Oliver to Kara's Barry — an equally strong hero with a decidedly grittier edge. Kate is also the head of Wayne Enterprises, making the whole scenario even more suspicious.

Also according to EW, the answer for why Bruce Wayne has not been cast in this series helps explain the state of Gotham itself: Batman has been missing for three years in the Arrowverse.

"Some people [in Gotham] are thriving in [Batman's] absence because now they can start to do their own thing without the oversight," consulting producer Caroline Dries told EW. "A lot of other people are suffering and they’re losing hope, and the city itself and infrastructure is falling apart. So it’s not a happy place. Our guys walk into a grimy, scary Gotham."

In the same interview, Stephen Amell and Grant Gustin talked about how each of their characters react to the Caped Crusader's legacy. Unsurprisingly, Oliver isn't thrilled about his presence or his absence, and doesn't necessarily believe he's real, whereas Barry Allen is excited to make a new friend. Even when involved in a Freaky Friday scenario, could they be any more on-brand?

All of that is to say that, even though Batman won't appear in Elseworlds, his presence is definitely felt in the Arrowverse. The crossover event did give us Smallville references and Lois Lane, after all, we can't have everything all at once.

Holding Batman back for a little while longer isn't too surprising for the CW-connected universe; Supergirl keeps Clark Kent out of the spotlight whenever possible. This is Kate Kane's time to shine, and a character so universally and revered as Batman would detract from that. That said, the fact that he's missing might actually draw more attention to him — classic dramatic Batman. What happened to him? Where has he gone? Are Talia and/or Nyssa al Ghul involved?

Surely Bruce will show up eventually, now that Batwoman and Gotham City have been introduced on The Flash, Arrow, and Supergirl. It may be a while, but let the casting speculation (and the speculation about what the heck happened to him) begin!