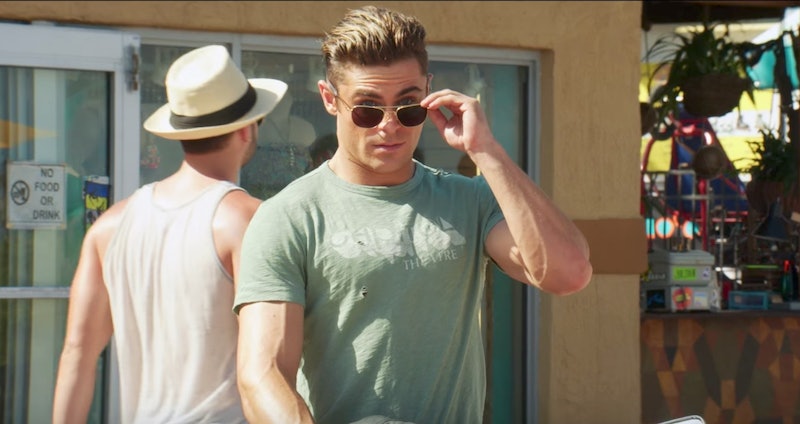 Paramount Pictures
By Olivia Truffaut-Wong
May 25, 2017

Despite the female characters in its cast and the women that'll likely make up much of its audience, the new R-rated comedy Baywatch is all about the men. A majority of the film is spent with stars Dwayne "The Rock" Johnson and Zac Efron bickering about their genitals and taking turns ogling their female co-workers, and though the film tries to make red bikinis and slow motion running feminist with a handful of capable female characters, the focus is unquestionably on the men. To me, Baywatch feels like a movie made to make straight men feel good about themselves, and it uses Mitch (Johnson), Matt (Efron), and Ronnie (Jon Bass) to do it.

Let's start with Ronnie. A tech nerd who has what we in 2017 would call a "dad bod", sees his physique played for laughs. He's helplessly in love with CJ (played by model Kelly Rohrbach), who is sweet, smart, an excellent lifeguard, and a knockout. Naturally, they end up together, but it's never explored why CJ goes for Ronnie, when he doesn't give her much reason. Sure, he's got heart, and he follows her around the beach like a puppy dog with stalker tendencies, but the main selling point to CJ in the film is that he has a big penis. (CJ knows because of a painful gag involving a boner and slats of a beach chair from early in the film.) To which I say, "Seriously?"

Unlike Ronnie, Mitch, and Matt, CJ and the other female characters of Baywatch aren't given the space to be three-dimensional, with actual desires and interests. They're more than eye candy, portrayed as strong and smart women, but they also aren't given enough screen time for audiences to understand who they are outside of their interactions with the men of the film. CJ, for instance, is only seen through Ronnie's eyes. She's barely ever on screen without him, and every time she enters a scene, the camera is focused entirely on her physique. The movie seems to love showcasing her beauty in comparison to Ronnie's more "regular" looks, telling male audiences that even though they might not be as ripped as Johnson or Efron (and, let's face it, who is?), they are still entitled to the hottest girl on the beach.

Even the most "feminist" character in the movie is there solely to support the men and be catered to male audiences. Victoria Leeds, the villain played by Priyanka Chopra, is focused, fierce, and unapologetic. She surrounds herself by men, but is always in control, manipulating those who are stronger than her in displays of power rarely given to female characters on screen. She's also the only female character given any hint of a backstory. In the end, however, (spoiler alert) she is taken down by Mitch and Matt. Just like CJ, Summer, and Stephanie, Victoria's purpose is to raise the male characters up as heroes.

All in all, women — both on-screen and in the audience — are pushed to the background in Baywatch. And the homophobic jokes, of which there are plenty, certainly don't help matters. One particularly cringe-worthy moment occurs when Mitch and Matt investigate a murder victim at the morgue and Mitch tricks Matt into examining the dead man's genitals just so he can take a photo of it. Because what's more hilarious than a man touching another man? (My eyes just rolled to the back of my head.)

Baywatch may think it's doing well by women due to its female characters, but the truth is that in reality, it isn't all that different from the many other R-rated, male-driven comedies that only feature women as props to support the leading men.