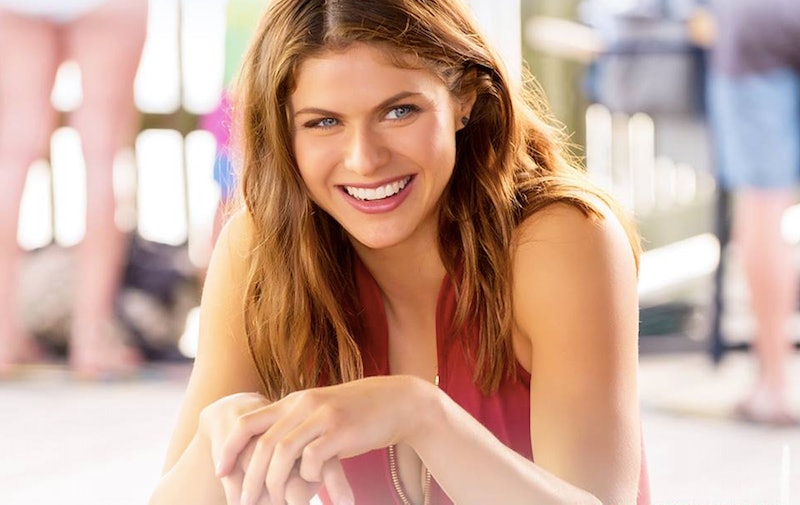 Paramount/Facebook
By Taylor Ferber
May 25, 2017

Regardless of her sultry role in Baywatch, Alex Daddario doesn't think she's a "sexy girl." I know — It's insane. And I tell her this when we chat over the phone a few days before the film's premiere on May 25. She laughs, thanks me for the compliment, but explains why she disagrees. From her nude scene in True Detective to rocking a bathing suit in Baywatch, Daddario says that it's a constant learning process to accept and love her body.

After bearing it all (and I mean all) for the HBO hit True Detective when she was 26, I assumed that shooting in a bathing suit would be a walk in the park. "It’s still challenging. It’s very different," she says. For Daddario, the challenging nude scene was also the onset of a personal evolution. "[It was] sort of like, ‘OK, you do this thing,’ and it turns out all right. Not only does it turn out all right, it turns out great and you don’t have to be ashamed of your body," she explains. It seems that the scene's success triggered something in her.

"That experience came at such an interesting time in my life... Confidence is something that I’m finding in my 30s more than in my 20s — as far as my woman-ess, who I am, how I look." Her experience from True Detective didn't necessarily make Baywatch easier, but informed how she'd tackle the new role.

"[With] Baywatch I wanted to entertain people and make people laugh," she says. "I think part of my growing up thing was just finding confidence as a woman and in just being who I am — being in a bathing suit and not feeling insecure." This shines through her character Summer, who's absolutely hilarious.

Yet the body-conscious struggles were still there, they were just different. "You had to keep your stomach sucked in all day for 12 hours. You get sick of worrying about what you look like constantly ‘cause there’s paparazzi on the beach all the time with Dwayne and Zac there," the actor says. "That was more of the challenge of this."

And although Baywatch is known for the perfection of its life guards' bodies, Daddario still doesn't feel like that sexy girl, even though she's now part of the legacy. "I was excited to be a Baywatch babe, I was honored," she says. But her "nerdy," sarcastic real-life personality was infused into her role, creating something that the franchise perhaps hasn't seen before. "I felt like sort of a nerd, so now I’m like a hot, sexy nerd, I guess?"

While Summer is a huge part of her, the role can also be described as Daddario's confident and sexy alter ego. "I feel like it’s an incredible role to play, the role of the really sexy girl. And that’s not something I feel like I am in my real life. It’s part of me. But as far as in my personal life, I’m more tomboy-ish."

Moving forward, Daddario is totally open-minded about scenes with little-to-no clothing involved. "I’m very liberal about that kind of thing. I think as long as it makes sense in the context, as long as it’s not exploitative," she says. "I’m an actress and the point is to tell a story in the way it’s supposed to be told." And it both scenarios, to the actor, it made sense.

"In Baywatch, the point is that we’re all sort of these super naturally, good-looking life guards that take our jobs way too seriously," she says. "Someday people won’t want to see me in a bathing suit and then I won’t do it anymore," the 31-year-old says with a laugh.

Meanwhile, she looks forward to a bright future that's authentically her. "I’m really, really proud of the work that I’ve done. Sure I would love to have Charlize Theron or Angelina Jolie’s career. But I think every person has their own path because everybody’s so different," she says. And her outlook is admirable.

"Part of doing what I do is just being authentically myself and not trying to be anybody else… That’s how I’ve been finding my happiness."

In a town of often struggling artists who sometimes wish they were someone else, Daddario's outlook proves she's more confident than perhaps she's even aware of.