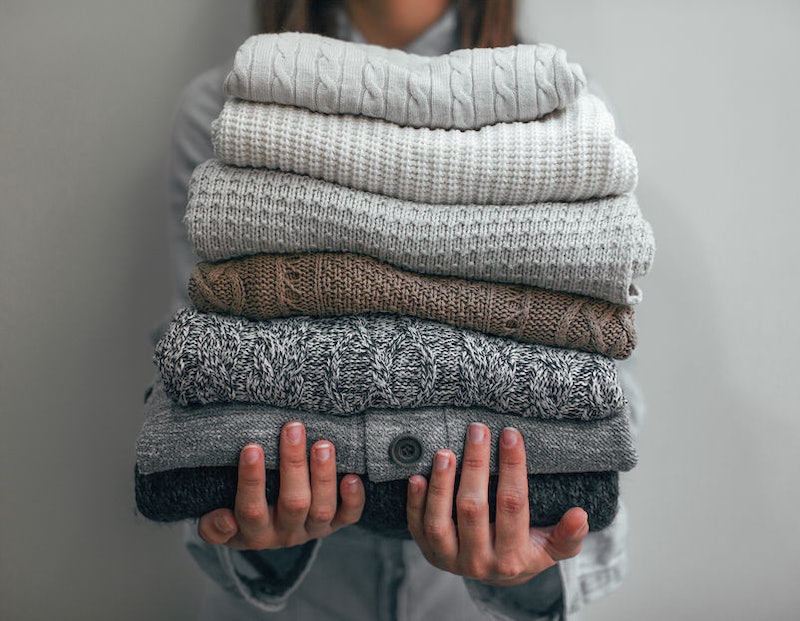 If you're a fashion lover like me, you may find yourself spending a good portion of your week scrolling through the 'New In' section of various retailers' websites. But our insatiable appetite for new clothes is having a serious impact on the planet, as BBC Earth's sustainable fashion project is pointing out. (And no, David Attenborough is sadly not involved.)

Instead, BBC Earth has teamed up with fashion brand Mother of Pearl and the British Fashion Council to launch #SustainableMe. A short film detailing the effects of fast fashion on the planet was unveiled at London Fashion Week. Narrated by presenter Liz Bonnin, the film highlights some shocking statistics.

Every year, more than 100 billion items of clothing are produced around the world. Thousands of different chemicals are used during the manufacturing process, affecting levels of clean water and air. The most worrying fact, however, is that three out of five clothing items end up in landfill within a year. And that isn't helped by the fashion industry's penchant for launching a new trend almost every week.

Think about it. How many times have you bought something because you saw a celebrity wearing something similar or because a fashion magazine told you it was "in", only to wear it once and chuck it away a couple of months later?

It's probably something every person in the Western world is guilty of. But, as Bonnin points out in the film, it's not too late to make a difference. "This planet is suffocating because of our increasing desire for fast fashion. And most of the industry still supports this, making it one of the world's biggest polluters," she says, adding:

"There is hope. Nature's power of regeneration is remarkable. The choice lies with us every time we invest in an item of clothing. We can consider every purchase and love our choices. We can buy quality and consume less. We can recycle and repurpose."

To help the public and the fashion industry see what is possible, BBC Earth is launching its very own brand with Mother of Pearl. "We don’t want it to be all doom and gloom — this is about positivity, and we want to offer solutions," Mother of Pearl's creative director Amy Powney told Vogue.

In June, a line of evening wear will be sold at Net-a-Porter. No images of the finished designs have been released but, according to a statement, each design will be timeless and made of organic silk while the collection's overall colour scheme will be inspired by nature.

Mother of Pearl has also designed two sweatshirts riffing on BBC Earth's most famous series: Blue Planet and Planet Earth. Keeping with the eco-friendly theme, the brand worked with Colorifix: a Cambridge-based company that has invented a dyeing process that uses 10 times less water than usual methods. If that wasn't enough to get you to part with your money, the collection's entire supply chain will be traceable and transparent.

BBC Earth is also asking people to commit to the #SustainableMe message on social media. Because if each and every one of us thought just that tiny bit harder about the purchases we make, we could transform the planet back into its natural state.

So whether it's finding new uses for the things that you own, digging a little deeper into the ethics of your favourite brands, or only buying something when you really truly need it, remember that mindfulness is the key.