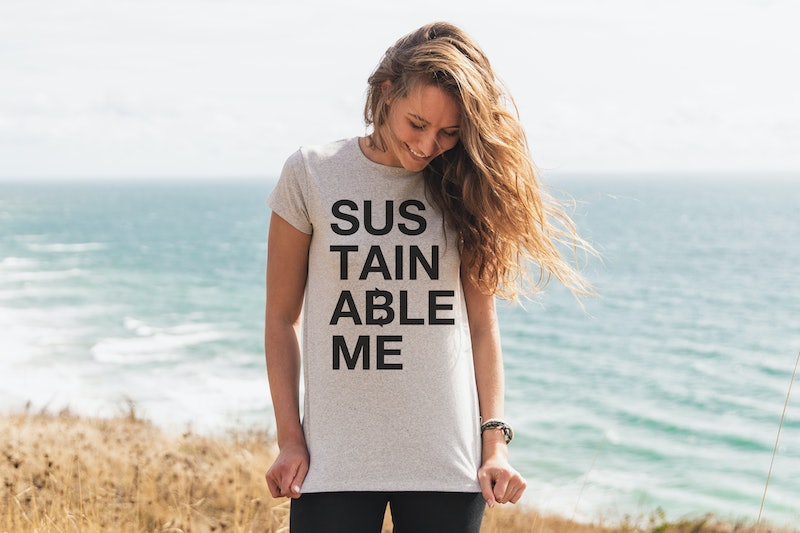 The fashion industry has a huge waste problem. Fast fashion has made it acceptable to buy an item, wear it once, and chuck it in the bin. Most of these garments end up on top of a landfill. Even the ones that can be recycled often aren't. But a solution is on the horizon. And BBC Earth's Zero Waste T-shirt is pioneering it.

Earlier this year, the documentary TV channel launched #SustainableMe. With the help of a powerful (and rather upsetting) film, it encouraged people to shop more sustainably and spread the message on social media. Now, BBC Earth has teamed up with T-shirt company Teemill for a garment that can be recycled again and again and again.

The #SustainableMe T-shirt is made from organic cotton reused from previously designed pieces. This material is then mixed with 100 percent Global Organic Textile Standard (GOTS) cotton. Once you're done with it, all you have to do is scan the QR code on your tee, send it back for free, and receive £5 store credit to buy another sustainable purchase. Oh, and the T-shirt is made in the UK, reducing its carbon footprint even more.

You may have become accustomed to assuming that ethical fashion is expensive fashion. And you're not wrong, in most cases. But Teemill and BBC Earth's collaboration will only set you back £20. Not bad for something that could potentially live forever.

“Slowing the fashion down doesn’t fix it," said Teemill's Mart Drake-Knight in a statement. "It makes much more sense to recover and reuse material than throw it away, so we built tech to power the reverse logistics of fashion.”

"It’s not about doing less, our ambition is to redesign the industry. We’ve shown it’s possible to create a positive loop where people are rewarded for keeping pure material flowing.”

Julia Kenyon, global brand director for BBC Earth, added: "This isn’t just a T-shirt. Teemill have used creativity and innovation to present a solution to a major environmental problem and we’re proud to be partnering with them for this launch."

Just how big that problem is may shock you. According to a parliamentary enquiry into the sustainability of the fashion industry, people in the UK get rid of around a million tonnes of textiles every single year.

Although many attempt to give their wares a new lease of life by donating to charity shops, 300,000 tonnes still end up in the bin. A fifth of this is taken to a landfill site while the other 80 percent is burned. The UK is also a huge buyer of new clothing. The same enquiry states that the nation is estimated to have the highest fashion consumption in Europe.

A BBC Earth infographic (above) details the impact behaviour like this has on the planet. In short, the fashion industry is an immense polluter. But unlike the oil industry, for example, reducing fashion's environmental footprint is something that any person can do.

Showing support for innovations like BBC Earth x Teemill will prove to bigger global brands that sustainability means business. If a small UK-based company can come up with an affordable solution, your favourite fast fashion brands can too.