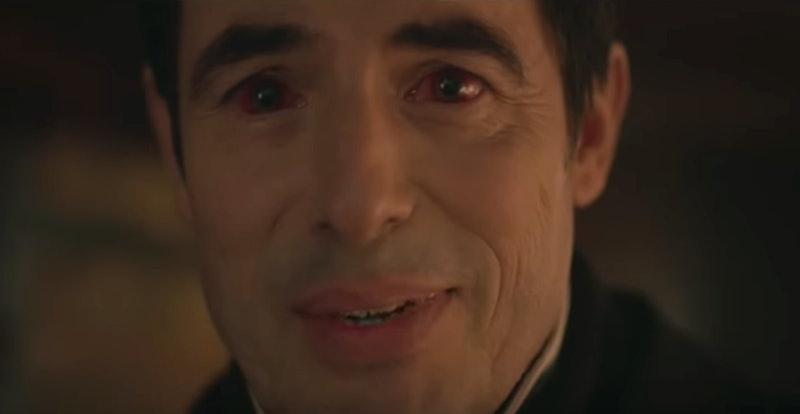 The creators of BBC’s Sherlock have a new series for fans to sink their teeth into. The first Dracula trailer from Mark Gatiss and Steven Moffat will bring bloodshed to London. Dracula, set to broadcast on both BBC and Netflix, is a three-part series based on the Bram Stoker classic novel that follows Dracula (Claes Bang) as he travels from Transylvania to Victorian London in 1897, and later, inevitably “battles with Van Helsing's descendant and beyond,” as per Netflix's official synopsis.

Unveiled on Oct. 27, the first Dracula teaser introduces viewers to Bang’s bloodthirsty vampire. The teaser clip first offers a series of eerie, unsettling images that make up the world of Dracula. Biblical crosses, nuns whipping out knives, and a ship out at sea set against a dim backdrop all but suggest that something sinister is at play. The trailer concludes with a first look of a bloodshot Dracula, who says to a terrified young man, “Try to stay calm. You’re doing very well.”

Variety first reported that the Dracula miniseries was in the works in October 2018. In a statement at the time, Gatiss and Moffat said of the new series, “There have always been stories about great evil. What’s special about Dracula is that Bram Stoker gave evil its own hero.” While the two have remained relatively mum about the series, Gatiss revealed back in April that Dracula was inspired by none other than Sherlock star Benedict Cumberbatch, as per Radio Times.

“We’d just started the third series of Sherlock where he comes back from the dead, and we had to break off after two days,” Gatiss said at the BFI & Radio Times Television Festival, as per Radio Times. “I had a picture on my phone of Benedict silhouetted against the door of Mrs. Hudson’s room. I showed it to Ben Stephenson, who was then the head of drama [at BBC], and I said, ‘Looks like Dracula.’ And he said, ‘Do you want to do it?'”

Gatiss added, “It didn’t happen immediately but that was the germ of it, really. So it just seemed like the natural one to do if we were able to.” When pressed further on what to expect in the series, Gatiss and Moffat remained tightlipped and told Radio Times that “vampirism, blood drinking, tallness," and "handsomeness" would be featured.