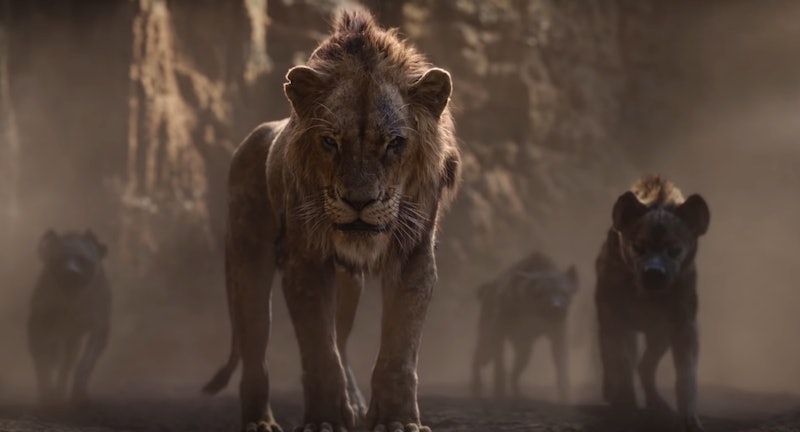 As you might have heard (or been able to gather from the trailer alone), the new Lion King movie is pretty darn similar to the 1994 animated version. A few updates have been made for the world we live in now, but in general, it's the same characters, the same plot, and the same songs. One of those songs is Scar's big musical moment, "Be Prepared", which in the new Lion King movie sounds familiar, but includes a couple of noticeable changes.

Most apparent when watching the movie is that the song is shorter. Disney Music released the new version on YouTube and it's listed at 2 minutes and 26 seconds, but Chiwetel Ejiofor's sing-talking doesn't start until around the :25 second mark. Meanwhile, the sing-along 1994 version Disney has on YouTube is two minutes and 34 seconds long and pretty much the entire thing is the actual song. There's more singing from Scar — Jeremy Irons in this case — and more singing from the hyenas. The entire thing is just more musical. When watching "Be Prepared" in the new movie, it feels like it's going to kick in at some point like the original... and then it just ends.

The lyrics to the song are also different. Aside from there just being a lot fewer lyrics in the new version, the beginning of the song is new. In the original, there's a lot of focus at the beginning on the hyenas — who are basically Scar's minions — being stupid. The new song puts more focus on Mufasa and the reason Scar wants to take over his regime. In the intro, he appeals to the hyenas and convinces them they're working toward a common goal. "Yes, leonine times are a-changin'," Scar sings in the new song. "Which means that hyenas must too/My vision is clear and wide-ranging/And even encompasses you."

In the original, Scar sings to the hyenas, for example, "It's clear from your vacant expressions/The lights are not all on upstairs/But we're talking kings and successions/Even you can't be caught unawares."

The lyric changes could have to do with the fact that the hyenas overall were updated from the original. The hyenas in the 1994 movie were named Shenzi, Ed, and Banzai; now they're Shenzi, Kamari, and Azizi with the two new names both being Swahili. As noted by Screen Rant, critics of the original hyenas have explained that they "contain racist undertones and stated that they perpetuate harmful stereotypes." In the new movie, the hyenas think for themselves more than in the original, and while they work with Scar, it's because they really consider it and think they could get something out of the deal for themselves.

As reported by i09, it had previously been rumored that "Be Prepared" would not even be part of the movie, but it later appeared on the full soundtrack list. Notably, it is listed as "Be Prepared (2019 Version)" when other songs, like "I Just Can't Wait to Be King" and "Hakuna Matata", are listed as their original titles.

Fans of the original "Be Prepared" will probably be disappointed in the new one, but on the bright side, the hyena issue was taken care of and the other songs kept their original lyrics. "Circle of Life" is just as powerful as ever.

More like this
Jennifer Coolidge Recites “Jenny From The Block” Beside J.Lo In Her First TikTok
By Jake Viswanath
The Jonas Brothers' New Album Has A Very Meta Name
By Alyssa Lapid
Cruz Beckham Teased New Music With An Adorable Nod To Mom Victoria Beckham
By Stephanie Topacio Long
The Spice Girls Are Set To Reunite At King Charles III’s Coronation
By Sam Ramsden
Get Even More From Bustle — Sign Up For The Newsletter
From hair trends to relationship advice, our daily newsletter has everything you need to sound like a person who’s on TikTok, even if you aren’t.