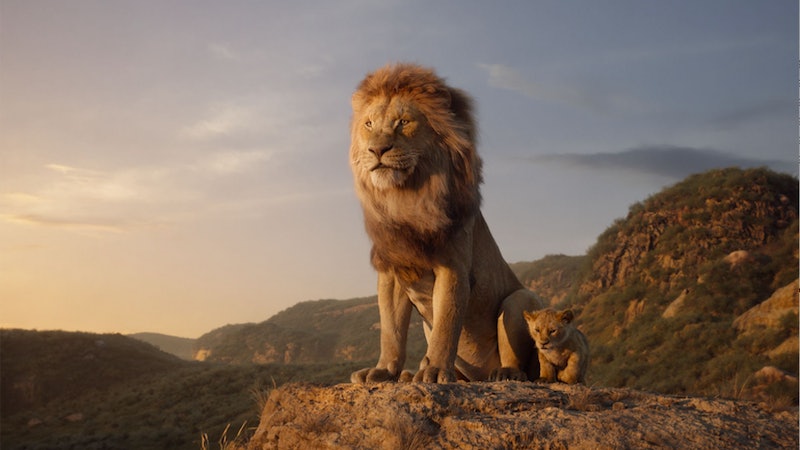 One of the many great aspects about any classic Disney movie isn't just the captivating storylines and interesting characters — it's the iconic songs that become so ingrained in your psyche that, much like riding a bike, they stay lodged in your memory forever. The Lion King in particular has always had an amazing list of unforgettable songs, which is why many of you will be interested to learn that The Lion King live-action soundtrack will include a brand new song that could very well end up rivaling some of your all-time favorites like "Circle of Life" or “Hakuna Matata." (Just kidding, of course. Nothing can beat those timeless classics, right?)

The movie is scheduled to hit theaters on July 19, but thankfully, fans will be able to listen to the soundtrack ahead of the film's release. (The songs will become available digitally on July 11 with physical copies of the album coming out on July 19.) And while the playlist consists of all of the typical songs you'd expect to see on there, Track 14 is cryptically titled "TBA," which stands for "To Be Announced." What new song will be getting featured in the film, and perhaps, more importantly — why is it being kept such a big secret to begin with?

The official song list for Disney's The Lion King, as reported by Pitchfork, is as follows:

As you can see, Track 17 is also a new creation by Sir Elton John, titled "Never Too Late," which is sure to be phenomenal because, well, let's be honest, Elton John can do no wrong. But if this new song is on full display, then why is the mysterious Track 14 being kept under wraps? What is it about this particular tune that requires so much secrecy?

Call it wishful thinking, but could it be possible this will turn out to be a new Beyoncé single that has yet to be announced? It would certainly help to explain all the mystery and intrigue surrounding the song. And, the song appears to be placed right after adult Nala enters the narrative, after "Can You Feel The Love Tonight," so it wouldn't be weird if she were to be singing a new original song. Not to mention the fact that, Aladdin, Disney's other live-action adaptation, added a solo song for Princess Jasmine, so it's not unheard of.

Regardless, this soundtrack is just one more reason to get excited for Disney's latest live-action undertaking. Hakuna Matata, indeed!

More like this
Britney Spears Shares & Deletes Photos Of Justin Timberlake From 22 Years Ago
By Jake Viswanath
The 'Scream 6' Trailer Shows Off Hayden Panettiere's Return & Ghostface In NYC
By Jack Irvin and Jake Viswanath
Jennifer Coolidge Recites “Jenny From The Block” Beside J.Lo In Her First TikTok
By Jake Viswanath
Lisa Marie Presley's Secret Granddaughter Was Revealed At Her Funeral Out Of Nowhere
By Jake Viswanath
Get Even More From Bustle — Sign Up For The Newsletter
From hair trends to relationship advice, our daily newsletter has everything you need to sound like a person who’s on TikTok, even if you aren’t.