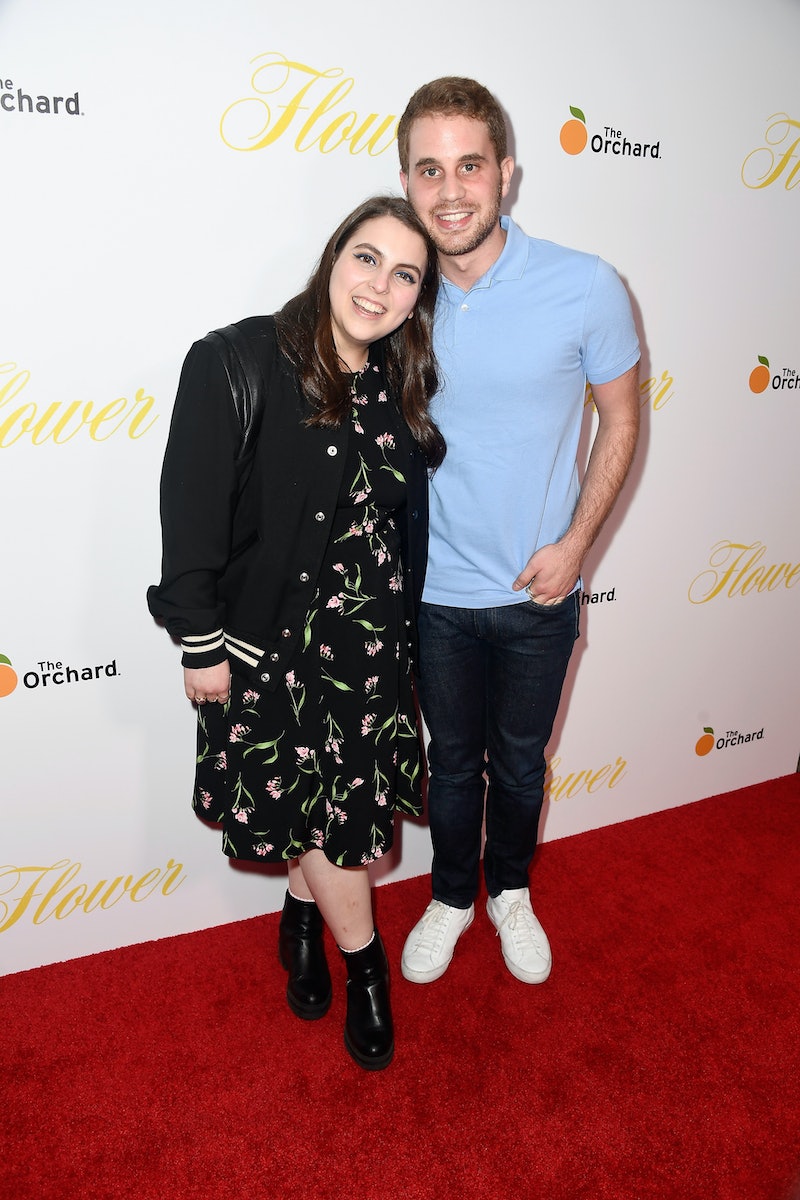 When people talk about finding their "soulmate," it's usually in regards to romance. The thing is, though, your BFF can be your soulmate, too. Take, for example, Booksmart star Beanie Feldstein and Ben Platt's friendship. They're pretty much cut from the same cloth. Two peas in a pod. Seriously, these two were meant to be — in a totally and completely platonic way.

Feldstein and Platt, both 25, first crossed paths back in middle school. They connected during a mutual friend's bat mitzvah, but kind of fell out of touch once the party was over. Not, like, intentionally or whatever. It doesn't seem like there's ever been *any* bad blood in Feldstein and Platt's joint past. This was just before iPhones took over the world.

Anyway, as fate would have it, they'd end up attending the same high school a year or so later, and they have pretty much been connected at the hip ever since. Not only that, but their careers have kind of always been connected, too. So much so, that both of them would eventually end up on Broadway at the very same time.

So, yeah. These two are pretty much a perfect pair, and have been since day one. Need proof? Let's take a look at their deep-rooted friendship.

They First Met At A Mutual Friend's Bat Mitzvah

During an interview on Late Night With Seth Meyers back in November 2017, Feldstein explained that she and Platt first met at a bat mitzvah. While they clicked right away, "This was before cell phones, so we didn't have any way to like, stay in touch," she told the host.

That same month, Feldstein told Vanity Fair that, not only did they click during their initial encounter, but, "We sort of got in trouble because we like, weren’t really hanging out [with anyone else]."

Despite their inability to officially launch their long-running friendship following the bat mitzvah, Feldstein and Platt reconnected once they both got to high school. "He joined my school in ninth grade and we instantly became best friends," she told Meyers in 2017. "And sort of the way that like, he knew we were best friends," Feldstein continued to recount, "was like, the second week of school, he got his braces off. And he texted me like, 'I got my braces off,' and I left my class to come see his teeth."

She then went on to tell Meyers why her leaving class was such a big deal, and explained, "I'm such a goody-goody, and I love school. So, he was like, 'I must mean a lot to you because you left to see my teeth.'"

They Costarred In Several School Musicals Together

In high school, both Feldstein and Platt were theater kids at Harvard-Westlake — "a private school for L.A.'s business and entertainment elite," as the Los Angeles Times described it. "I don’t want to brag, but our high school shows were amazing," Feldstein told the Sioux City Journal in March 2019. Some of those musical performances included productions of Guys & Dolls, Pippin, and Into the Woods, and undoubtedly helped them create a solid foundation for their future careers.

They Even Went To Prom Together

According to a joint interview the pair did with Vanity Fair in November 2017 — and as per the photos above, obviously — Feldstein and Platt once went to their high school's prom together. And apparently, Platt asked her to be his date by using lyrics from the musical Funny Girl, they told the outlet.

Years later, in 2018, Feldstein would go on to wear the very same prom dress she wore back then to attend the 2018 Screen Actors Guild Awards, she revealed to The Cut. She said,

"I put it on and it fit, surprisingly maybe better than it did in high school! I looked at myself and I was like, 'WHAT!?' and my mom and her best friend were just laughing so hard, like, 'You have to wear it! There’s just no other dress that would be better.'"

They Ended Up On Broadway At The Same Time

In 2017, Feldstein and Platt found themselves in starring roles on Broadway. Feldstein was playing Minnie Fay Hello, Dolly!, and Platt was gaining acclaim in the title role of Dear Evan Hansen. As if that weren't serendipitous enough, the respective theaters that they were performing in just happened to be right across the street from each other. How wild is that?

"It really is not to be believed,” Feldstein told Vanity Fair. "I can imagine us in high school if we read about a best-friend duo that was on Broadway. We’d be like, 'We’re obsessed with them!' We would watch every Broadway.com interview they did."

When Ben Won A Tony, He Was Wearing Cufflinks Beanie Gave Him When They Were 16

In an Instagram post from June 2017, Feldstein revealed that when they were both 16 and still in high school, she "gave him cufflinks to wear when he wins his first tony." Flash-forward to nearly a decade later, and, "at 23, we are on Broadway at the same time... and he wore the cufflinks [to the Tonys]," Feldstein wrote about Platt winning Best Performance by an Actor in a Leading Role in a Musical for Dear Evan Hansen that year.

"I think Ben is the best at what he does because he’s my best friend and I see him through these rose-colored glasses," she told the Los Angeles Times of his big win. "But at the Tonys, there was this moment where everyone in this room of the best of the best was seeing him the way that I saw him. It was really emotional, everyone seeing the genius I’ve always seen."

See? It seems as if Feldstein and Platt were pretty much destined to go through life together. Anybody else think they should totally do a buddy film or something for their next project? Ten out of ten, would watch.