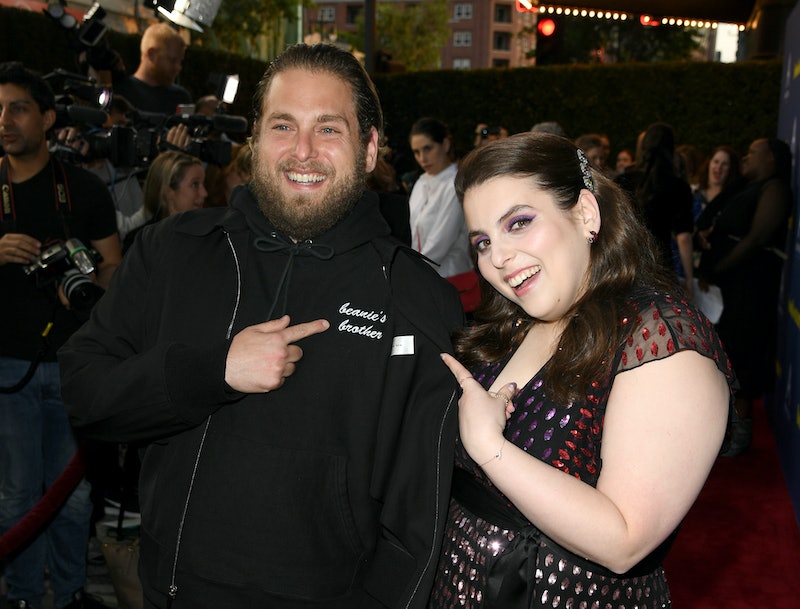 Hollywood siblings Jonah Hill and Beanie Feldstein have 10 years between them, but that doesn't mean they're not super close with each other. Beanie Feldstein and Jonah Hill's best sibling moments over the years show how much they support each other and all their endeavors.

Ahead of Feldstein's movie Booksmart, in particular, Hill has been taking on the supportive brother role. Between wearing a "Beanie's Brother" shirt to the movie premiere and calling his sister a "brilliant movie star," Hill really is doing everything he can to show his support. Plus, he has a tattoo of his sister's name, for goodness' sake.

And before Feldstein broke onto the Hollywood scene, she was doing just as much to support Hill's endeavors, too. Feldstein's Instagram posts about The Wolf of Wall Street and 22 Jump Street show that she's always looked up to her brother and his career.

Whether they're praising each other's movies or just goofing off, Hill and Feldstein have a sweet sibling relationship that's built on plenty of mutual respect. Whatever the future has in store for the two actors, fans can bet that the other will be there to cheer each other on.

While Feldstein has been promoting her upcoming movie Booksmart, her brother's been by her side. To keep the focus on his sister, Hill wore the "Beanie's Brother" shirt to a Booksmart screening, with the implied joke that she's now the more recognizable sibling in the family. (Feldstein also shared a picture of Hill in the sweatshirt last December in honor of his 35th birthday.)

2. When Feldstein Was Inspired By Hill's Friendship With Michael Cera

Feldstein and Kaitlyn Dever lived together while filming Booksmart, and it sounds like they can thank Hill and his Superbad costar. Apparently, Feldstein told director Olivia Wilde about how close Cera and Hill had been during their own time filming a teen movie, the Los Angeles Times reported. And the conversation inspired Wilde to suggest Feldstein and Dever become roommates so that they could get to know each other, as Hill and Cera had.

Feldstein played Minnie Fay in Hello, Dolly! on Broadway, and Hill got some fresh ink in honor of the occasion, to show his support for his sister's new gig. Feldstein posted a photo of her brother at what looks like a tattoo studio, where he's showing off the "Hello, Beanie!" tattoo. (It doesn't look like a prank, either — his arm is shaved and the surrounding skin is pink, both signs of a fresh tat.)

Both siblings have always had a silly side, and it's on full display in this childhood photo of them together she posted this past March.

5. When Hill Called Feldstein His "Hero"

Reposting a vintage picture of the two siblings last March, Hill shared a sweet message for his sister. He captioned the post,

"@beaniefeldstein just posted this. As always, I'm copying her because she's cooler and the leader of us two even tho she's ten years younger. My hero and my best friend. And now she's going to make fun of how earnest my Instagram posts are. But too bad Beanie, you taught me to be myself. And I'm sappy AF. Whatever."

In Feldstein's caption on the same photo, she wrote, "my best friend!!," so the love is definitely mutual.

6. When They Couldn't Resist Taking This Tourist Photo Together

If your nickname is Beanie, you and your sibling have to take a picture with a "Bean Hill Road" street sign, right?

7. When Hill Called His Sister A "Brilliant Movie Star"

Seriously, the actor-director's love for his younger sibling knows no bounds. Hill posted the Booksmart poster in March, writing, "My sister is a brilliant movie star. @beaniefeldstein #bookssmart trailer is out. Link in bio!"

8. When Hill Compared His Relationship With His Sister To Lisa & Bart Simpson

Hill interviewed Feldstein for Interview magazine, and the two of them talked about their respective work. But discussion of their personal lives growing up together came into play, too. And the 21 Jump Street actor had a pretty funny TV comparison for their relationship. "You could definitely make an argument for us being a lot like Lisa and Bart when we were kids, even though we were ten years apart," he said during the interview.

9. When Hill Said His Sister Was "Already Smarter Than Me" As A Baby

Hill and Feldstein's childhood photo is cute enough already, but his caption shows just how much respect the Mid90s director has for his sister. He captioned the picture posted in June 2018, "@beaniefeldstein already smarter than me." Combined with his joyous big brother grin, it's really too cute.

For National Siblings' Day in 2016, Feldstein didn't just share a photo of herself and Hill. Instead, she posted a screenshot from a text conversation they'd had about Melissa McCarthy, calling the Can You Ever Forgive Me? actor "our queen" and "our hero." Hill also texted that the siblings "have to work with her," which would be epic if it came to fruition.

11. When They Had The Cutest Nicknames For Each Other

12. When Feldstein Had The Best Caption Posing Next To A 22 Jump Street Poster

Feldstein took a photo next to her brother's face on the poster, captioning the post, "Big brother is watching!!!," which is too perfect.

13. When Hill Praised His Sister's Self-Confidence

During a conversation for Hill's zine Inner Children, published in 2018, Hill told Feldstein how much he admired her sense of self-worth. "You are my hero because you seemed, very early on in life, to grasp the idea of loving yourself in a way that I find so impressive and inspiring," Hill said in the interview.

Feldstein and Hill have a long history of supporting each other's careers, most recently with his posts about her movie Booksmart. And as both of them continue on their Hollywood journeys, they'll have their sibling's support every step of the way.

More like this
We’ve Entered The Hot Boy Reader Era
By Samantha Leach
Harry Styles Is Performing At The 2023 Grammy Awards
By Jake Viswanath
Brad Pitt Wants To Share The Spotlight With This Celeb In Shania Twain’s “That Don't Impress Me Much”
By Alyssa Lapid
Adam Levine & Behati Prinsloo Welcome Their Third Child Together
By Jake Viswanath
Get Even More From Bustle — Sign Up For The Newsletter
From hair trends to relationship advice, our daily newsletter has everything you need to sound like a person who’s on TikTok, even if you aren’t.