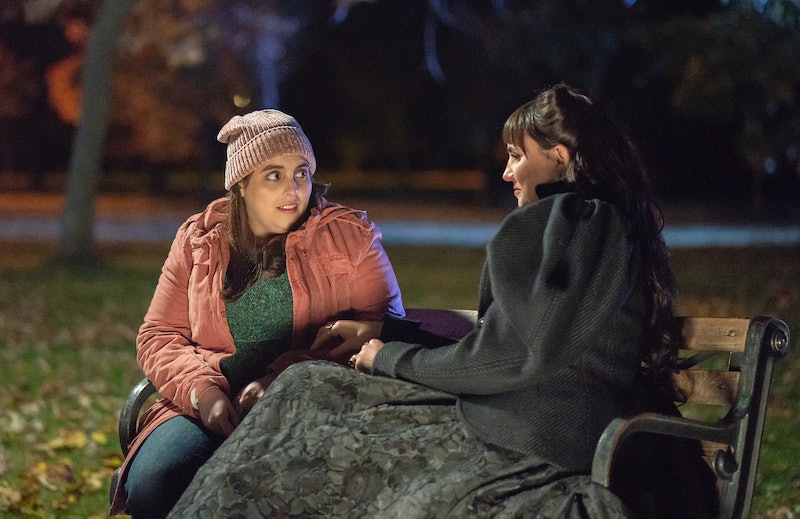 What We Do In The Shadows' main vampires are all well into the triple-digits when it comes to years of vampiric experience, but their Staten Island clan may have another, younger vampire in their midst soon. Beanie Feldstein's What We Do In The Shadows character, Jenna, seems to be going through something suspiciously close to early-stage vampirism. And considering Nadja is the one who bit her, it seems inevitable she'll show up at their house looking for answers in the near future.

Jenna, a local college student, was first seen in the show's pilot, when the vampires attempted to lure her and some fellow Live Action Role-Players to their house to feed on after correctly assuming they were virgins. The vampiric thirst for virgins is explained in more thorough detail in the original What We Do In The Shadows film, but suffice it to say that Jenna fits the bill for being the ideal vampire meal. After Nadja uses Jenna's sexual interest in her to feed on her blood, Nadja returns the favor by allowing Jenna to partake in her own blood, thus beginning the process of becoming a vampire.

The intro to the episode "Manhattan Night Club" shows the consequences of this mutual feeding, as Jenna's roommate returns to their dorm to discover that Jenna is not sleeping or breathing, and that her heart has stopped. Just as medics are taking her corpse away, Jenna suddenly jolts up and returns to her dorm room, insisting that she's fine, despite the fact that she is clearly undead. Jenna is absent from the rest of the episode, which suggests that future episodes may check in on Jenna's vampiric evolution, and that perhaps Feldstein will even join the main cast.

The show roots a lot of its comedy in the loneliness of vampires and those drawn to them, but in a way Jenna's story is the most depressing one on the show — that of a young girl seeking respect and attention whose first sexual experience ends up cursing her with eternal life and a thirst for blood. This may be part of Nadja's plan, however, and Nadja felt sympathy for how Jenna was ignored and mistreated by the men in her LARPing group. While Nadja probably just could've given Jenna a pep talk, she instead turned Jenna into a vampire who will almost certainly feed on the boys who used to mock her.

Jenna's storyline is essentially a coming-of-age tale tucked into an absurd vampire comedy, made all the more successful by casting Feldstein, who's been making a name for herself through coming-of-age movies like Ladybird and Booksmart. Her storyline in What We Do In The Shadows suggests she'll bring the youthful uncertainty on display in those films to the small screen, just with a supernatural twist. In a show full of despicable characters, Jenna may be the rare character on WWDITS that audience's actually root for — assuming she doesn't start to take too much after Nadja, that is.