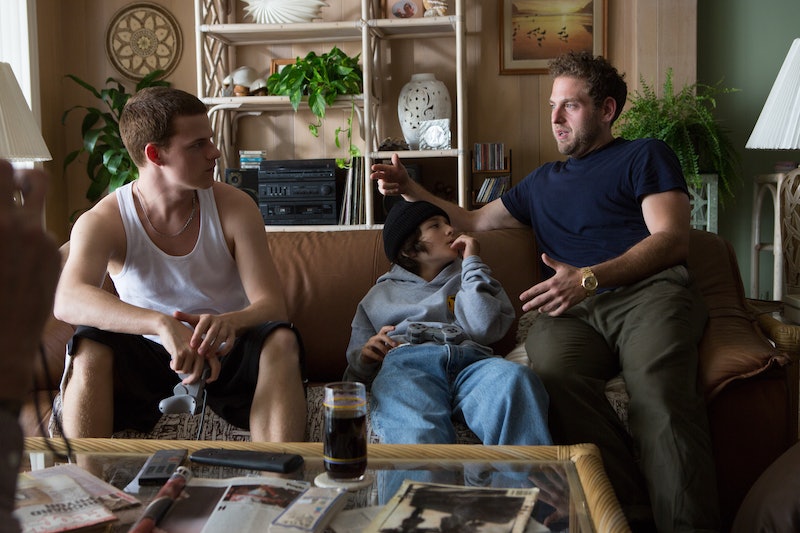 No matter who we become or where we end up in life, some part of our brain will always remain stuck at our most awkward age. We never really forget the pain of wanting to be accepted more than anything in the world at the point we felt least able to be so. Jonah Hill describes it as a "snapshot," a memory of younger selves we're ashamed of, and it's the core of his directorial debut Mid90s. The film follows awkward 13-year-old Stevie (Sunny Suljic) through '90s Los Angeles as he tries desperately to fit in with a group of skaters, something Hill himself wanted when he was a "14-year-old overweight and unattractive kid who felt ugly to the world."

Fitting the film's 90s throwback, Hill put together a 'zine called Inner Children for its release, trying to make peace with his younger self. For those of you too young to remember a pre-internet world, 'zines were the Tumblrs and blogs of their day — handmade mini-magazines where people shared their thoughts and obsessions. They were mailed, shared, and passed around with the same semi-anonymous thrill of an online post, but far more tangible.

Interviewing 12 of his heroes about their own snapshots, Hill's zine asks how, and if, they learned to love themselves. The result is a painful, sincere, sweet and sometimes sad revelation that even the "cool" kids struggled with self-love, and most of us still think of ourselves as that gawky kid. Dedicating the zine to his Superbad-era self, Hill said the interviews "turned into some of the most meaningful conversations I’ve ever had."

In the exclusive excerpt below, he talks to Beanie Feldstein, a singer, dancer, and actress who's appeared in Lady Bird and TV shows like Orange Is The New Black. She also happens to be Jonah's sister, and hero.

JH: Some of these questions may seem funny because you're like, my sister. But to me, you’re the biggest inspiration. You are my hero because you seemed, very early on in life, to grasp the idea of loving yourself in a way that I find so impressive and inspiring.

JH: When did you become aware that that was an important thing?

JH: How did you become aware of it, or why?

BF: Well, I struggled with my weight, as you know, growing up. I think I felt like other people wanted me to be something that I just wasn't. When I finally let go of that pressure, I felt comfortable and relaxed and free from expectations. I think that mentality just grew into being who I am as a person. I always say, "They either want the Bean or they don't want the Bean."

JH: Everyone wants the Bean.

BF: No, not everyone wants the Bean, and that's okay, because there's only one Bean, I know that. That's the best thing ever. So it's OK if you don't want it, because the people that do want exactly me.

JH: Do you realize that that is very unique to have? I feel like you got struck by lightning or something at 14, you know?

BF: Yeah, I definitely do. I feel very lucky, even though it's not totally luck. I think there is an inherent brazenness about me, but I also had to work hard at overcoming certain demons to get to the place that you say that I am now and I say that I am now. I was lucky enough to have a passion for musical theater at such a young age. So from a young age, I was really good at and committed to something. I think the combination of those two things gave me a foundation.

JH: Was it the being good at it that gave you confidence? Or, was it that you just loved it so much, you didn't care about anything else?

BF: Well, I think it was this unique combination of passion and work ethic. The result of that was talent. I had vocal nodules at age nine. They told me I would never be able to sing unless I went to therapy five times a week and completely relearned how to talk and sing. Even at nine, I was like, "Oh, I'm going to be a singer. I want to sing for the rest of my life. You can't take this away from me. I will work day in and day out to make sure that I have this in my life forever." I was jolted into an intense dedication to something, I worked so hard at it, and I obviously loved it so much. Through those things, I became very good at it. And the fact that I was being validated definitely gave me confidence.

JH: That's amazing. You're just a freak of nature. You're my favorite person.

BF: Well, you're my favorite person.

JH: You had this skill and you had this passion. The response you got from your hard work and your passion was very positive, right?

JH: That gave you a lot of esteem, you're saying, to maybe give a shit less about what people wanted you to be?

JH: You know what I'm just realizing right now, maybe? I think it has a lot to do with community.

BF: One hundred percent. I was just about to say that. The theater community is the most warm, loving group of people. It is within a group. It's not within one person. Something that I wasn't always confident in, and that I really went up and down with throughout my life, was academics.

BF: Especially in high school. I was surrounded by such gifted brains, true geniuses, and I felt so self-conscious. I always had that thirst for knowledge, and I wanted to be great. I was very good, but I wasn't great. I wasn't an exceptional mind the way that some of my dearest friends are. That really took a toll on me.

It wasn't until college that I finally found it in a real way. Even now I struggle with it. Now that I'm out of college, I feel less bright than I was, less engaged. Not as stimulated, and that makes me feel less confident.

JH: Are you learning a lot more about life now than you were with academia?

BF: Yeah, definitely. But, I do think that because it was something that I've fallen in and out of confidence with, it does scare me a bit now to feel less confident in it, you know?

JH: What does it make you feel?

BF: I made this resolution to ask when I don't know things. You do this with me all the time, you're like, "Have you seen the movie?" And I'm like, "No." For me to say, "No," it takes a lot of guts because I know you're going to get really frustrated. But, I realized if you don't speak up when you don't know things, then you don't learn.

BF: Totally. I mean, I look at my friends that are so much thinner than I am, and they're freaking out about their weight. I don't get it. I'm like, "You're skinny.”

JH: That one is the hardest.

BF: It's not. It's the hardest for some people.

JH: That's what I'm saying. I think you are so special. You freed yourself of this thing that can cripple people, myself included. It's not a fun way to be, but I feel like most of society does feel that way. Even my friends who are in super great shape will be so hard on themselves or upset, you know?

BF: Definitely. I can only explain it like this: I think I've always known who I am. I've always been a singular human being. I've always been chubby. It felt like a part of who I was. It just feels like part of my identity. Mom and I were shopping a couple months ago in L.A., and there was a big sign outside of a store that said, "Chubby," and I just dropped all my bags. I was like, "Take a picture of me." It's just part of who I am. I think that's great. I'm like a human teddy bear. I'm soft and squishy. I'm cuddly.

JH: And I'm affected more by society's view of attractiveness and weight. That is like my Achilles heel.

BF: I know, and it breaks my heart, because you're my brother and I only ever see you and your face and your humor and your kindness and your talent. You look handsome at any size, so it hurts me that it hurts you.

JH: I love you and I appreciate that. I think you have inspired me to be able to have conversations like this.

BF: That means a lot to me.

JH: I'm trying to understand, and maybe not take this sh*t so seriously and not be so hurt by what everybody else wants.

BF: Yeah. I mean bodies are weird. Everyone's body is weird no matter how big or how small it is. Bodies are just weird.

JH: Would you say that 15 was the start of the path to loving yourself?

JH: Damn. What are you most embarrassed of?

JH: What did you lie about?

BF: It makes me really sad and embarrassed. Because I was sad, because I didn't have friends. I think I'm compassionate for her. I feel sad for her. Empathy for her, too, because she feels really far away from who I am.

Everyone, in some realm of their life, whether it's weight or school or work or relationships or friendships or family or whatever it is has that feeling of "I'm not good enough." Everyone is different, but everyone does have that feeling, and I think that's what connects us as human beings, because we're all striving to be better.

JH: What is the path to self-love?

BF: And be thankful for the areas that you don't feel that way in. It's like gratitude towards aspects of yourself.

JH: I think that's a great way to end. I think you should give yourself a compliment today on being a great sister.

BF: You should give one on being a great brother plus interviewer. Honestly, surprising.

BF: I love you more.

Hill's movie may perfectly capture the pain of living through those harsh, self-hating years, but this heartfelt sibling conversation shows that everyone's been there. Mid90s hits theaters on Oct. 19, and the full 'zine will be available online soon after.

More like this
20 Celebrity Couples Who You Forgot Dated In 2002
By Jake Viswanath
Simply Sayo Doesn’t Consider Kpoetry Hard Work
By Jessica Morgan
Everything To Know About Marvel’s 'Thor: Love And Thunder'
By Grace Wehniainen
Sadly, 'Fantastic Beasts: The Secrets Of Dumbledore' Isn’t Streaming — Yet
By Arya Roshanian
Get Even More From Bustle — Sign Up For The Newsletter