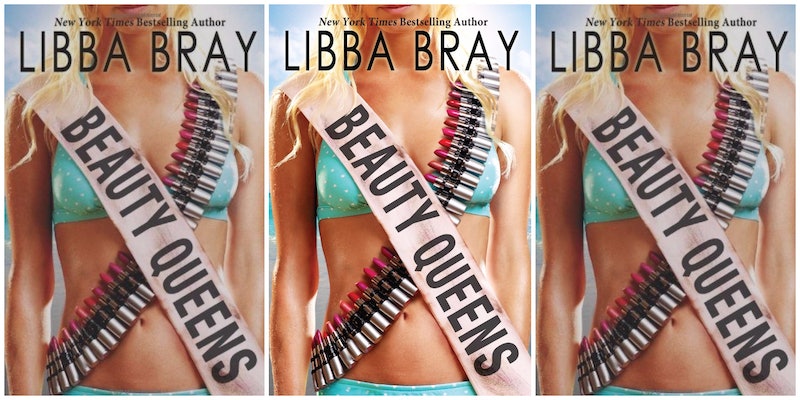 Scott McGehee and David Siegel of Warner Bros. announced their plans yesterday to adapt William Golding's 1954 novel Lord of the Flies in a new film, with one key difference: the school boys stranded on an island would be replaced with girls. But Beauty Queens is the all-female Lord of the Flies retelling that Hollywood should be adapting. Because in a long-standing patriarchy, switching out "boys" for "girls" is hardly a simple swap.

This is not the first time that the classic story of masculinity, aggression, gender performance and social order has made its way to the screen. In 1963 and again in 1990, the book was adapted for the screen, both times by men. This latest, all-female adaptation will also be directed and, more importantly, written by men. Predictably, social media had a lot to say on the matter.

Many of the initial arguments stemmed by the fact that boys and girls, from the time they're born, are socialized differently. What is gender if not a performance? They're taught to address their feelings, particularly aggression, differently. They're taught to suppress different emotions. Even the concept of competition is treated differently. And for those of us who went through middle school and high school presenting as girls, we know that there are nuances a girls-only social order. Would the abject violence and warring even happen in a group of teen girls?

And then, bookworms across the country began pointing out that there already is an "all-female Lord of the Flies" - and it's Libba Bray's 2012 novel Beauty Queens.

Fifty contestants in the Miss Teen Dream beauty contestant are left stranded on a desert island after a plane crash. With no adults and few resources, they're left to their own devices — and the former competitors, who have dedicated an immense amount of time and energy into their physical appearances, must rely on one another in order to survive.

Perhaps the best part? It's written by Libba Bray, an award-winning YA/fantasy/historical fiction writer who specializes in female-heavy plots and the inner workings of platonic female friendships.

Oh, and it doesn't hurt that Libba Bray is very much alive and very capable of adapting her own book.

Although details of this all-female Lord of the Flies movie have yet to be released, Scott McGehee and David Siegel note in their announcement on Deadline their excitement in beginning the writing process as soon as possible.

"People still talk about the movie and the book from the standpoint of pure storytelling,” McGehee told Deadline. "It is a great adventure story, real entertainment, but it has a lot of meaning embedded in it as well."

If you, like so many others, want to pass on the Lord of the Flies retelling, pick up Beauty Queens instead.