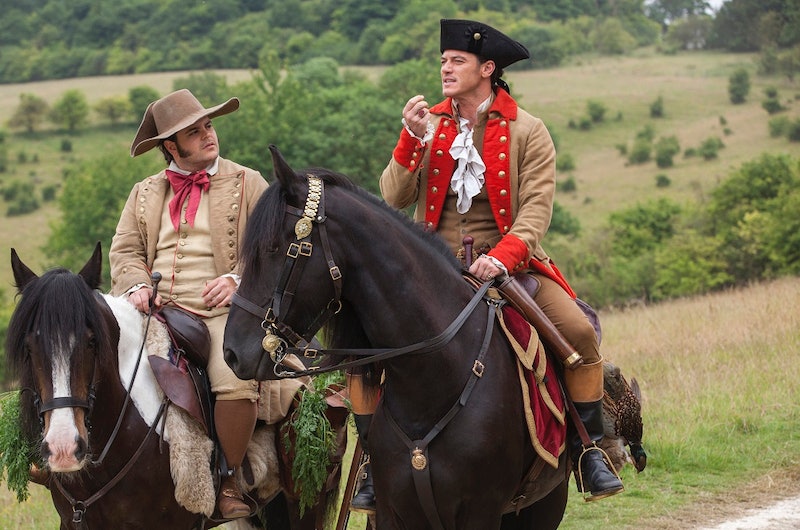 Think you couldn't be any more excited about the new live-action remake of Beauty And The Beast? Trust me, you definitely can. As revealed in the April issue of Attitude, Beauty And The Beast will feature a gay character, and sweet mercy, you guys, this feels groundbreaking on multiple levels. I mean, not only will this be Disney's first openly gay character in a movie, but just think about what implications and influence this could have for mainstream movies to come. I'm beaming over this.

Speaking to the magazine, director Bill Condon revealed that Gaston's sidekick LeFou is revealed to be gay in the film. Condon explained,

"LeFou is somebody who on one day wants to be Gaston and on another day wants to kiss Gaston ... He’s confused about what he wants. It’s somebody who’s just realizing that he has these feelings ... And that’s what has its payoff at the end, which I don’t want to give away. But it is a nice, exclusively gay moment in a Disney movie."

I'm sorry, did I mention that I'm beaming? Because I absolutely am. Mainly because I'm giddy with anticipation over the effect this could have on mainstream cinema and Disney movies overall.

Because even if the "gay moment" described by Condon is small, it still means something for the potential future of cinema. By positioning such a character and moment within a family movie, it can help homosexuality become normalized for young audiences. The subject is no longer hidden away, or winked at suggestively through subtext. Instead, audiences get to see an openly queer character who isn't hiding — and who doesn't have to. That's powerful to witness at any age.

It's worth remembering, after all, that people have long speculated upon the queer characters in Disney movies. The likeness and personality of The Little Mermaid's Ursula was reportedly inspired by legendary drag queen Divine. But there's also been the speculation over "coded" gay Disney characters (i.e. when a character is ascribed traits commonly associated with queer people, without being explicitly stated as queer) like Elsa in Frozen, or "coded" gay Disney couplings like Hugo and Djali in The Hunchback of Notre Dame and Timon and Pumbaa in The Lion King.

But whether intentionally or otherwise, all of these potentially veiled queer representations have safely toyed with ideas of queerness without being overt about it. In other words, none of them are blatant enough to feel tangible. In both Disney, and mainstream cinema overall, being gay is is often alluded to only in euphemism. Rarely is it openly and positively celebrated on screen. And that's something that definitely doesn't reflect, or respect, the sexual diversity of the average audience.

LeFou's "gay moment" in Beauty And the Beast may be minor, but it's another step forward for the LGBT community in gaining essential visibility within a mainstream context. By presenting such a moment and developing such a character, Disney is helping to express homosexuality as a norm, not an aberration. They're expressing it as something that shouldn't be hidden, but enjoyed with pride. And they're helping to remind children that though the lead love story may be heterosexual, it isn't the only acceptable expression of sexuality that there is.

But, moving forward, I'm personally hopeful that such a decision may inspire other major movie studios to follow suit in bringing more openly queer characters to the screen. Hopefully, they'll also feel comfortable in doing so with family films, too. And in time, maybe, just maybe, we'll get to see a humble shop girl who falls in love with a princess, or a cursed young man who manages to find his Prince Charming who can break the spell for him.

But until that day comes, I'll just be over here applauding LeFou, and awaiting the next small progressive step toward cinematic queer inclusion.