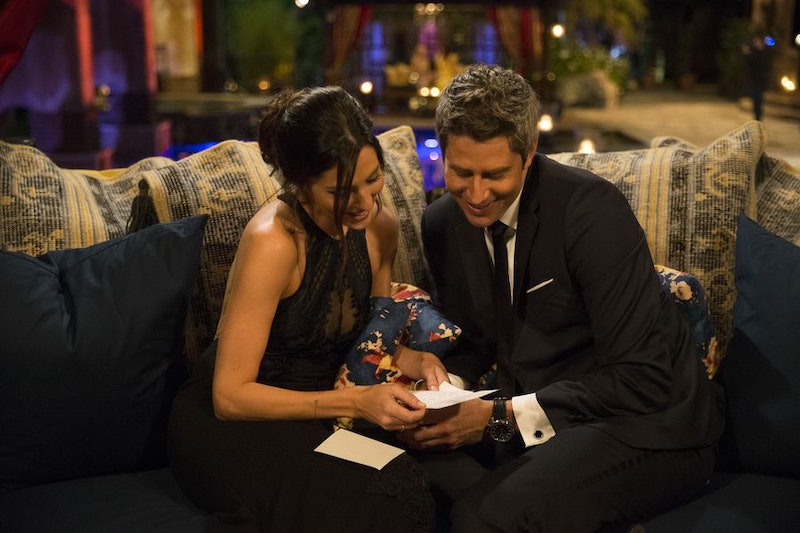 One of the most fun parts of any season of The Bachelor are the limo arrivals, and on Monday night's premiere, one of them completely blew fans away. Becca proposed to Arie on The Bachelor as a way to stand out, and the moment was so light-hearted and perfect that it's no wonder she left him laughing as she went inside to join the other women at the rose ceremony. It's proven every season, people: The perfect mix of funny, unexpected, and adorable never loses when it comes to those first few moments with the leading man.

There were definitely a few arrivals that were memorable as always — and the race car theme was, predictably, very present. But when it was Becca's turn to make her entrance, she went for something a little different: Beginning at what we normally think of as the end. She instructed Arie to get down on one knee and ask her if she was "ready to do the damn thing," and of course, she accepted. And judging by Arie's reaction, it definitely seemed like something he wasn't going to forget — especially since he said, "Well, that was a first for me," as she walked away.

It was also super cute how she pretended like it was his idea and everything was moving too fast, so it makes sense that he seemed to like her from the very beginning.

Seeing Becca's limo arrival made it easy for fans to like her, too. Not only was her limo entrance different from all of the other ones that happened during the premiere, but it was also different from the gimmicks we normally see season after season. In a sea of dozens of women wearing evening gowns, it's important to find a way to stick out in the Bachelor's memory when it comes time for the cocktail party... and it's even more important once the first rose ceremony rolls around, since that's the time major cuts are being made. Sometimes, accomplishing that means making a cheesy gesture like this one, but in Becca's case, it didn't fall flat at all. It could have come off overly creepy, too, to jump to a proposal so soon — but she made it easy, breezy, beautiful Bachelor.

Her proposal also made it clear what kind of person Becca is from the get go: Pretty chill, with a good sense of humor — and someone who isn't going to take what has to be a really stressful process too seriously. Of course, it's incredibly early in the season and we could learn things about Becca later on that change all that, but for now? She's making a really good first impression, not just on Arie, but on the fans as well.

There were tons of other memorable arrivals, like the other Bekah's classic car, and when some of the women gifted Arie with cool stuff like elephant cufflinks and a little wiener, so it's a good thing Becca pulled out all the stops on this one. It's going to be tough competition, and everyone seems to be ready to fall for Arie hard and fast, so Becca giving herself a good head start like this one could be what helps her come out ahead.

Besides, if Becca makes it to the end and Arie ends up proposing to her for real in the finale, this is going to be a really cute story to share about how they met — and how their actual proposal was the second time Arie got down on one knee for her. He could even repeat her same adorable proposal line to bring everything full circle. Maybe I'm getting ahead of myself, but Becca's limo exit could prove to lead to a very happy ending for her and Arie, both.