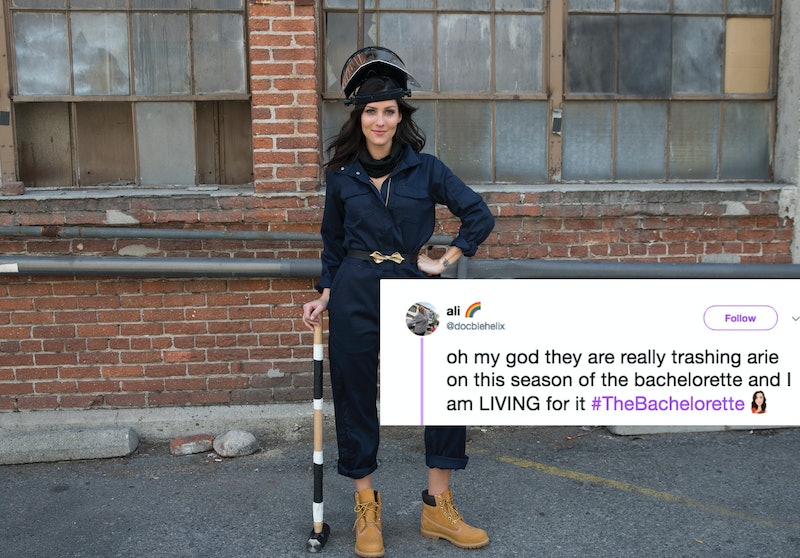 The best way to get over your ex is destroying all his stuff, right? Just another lesson from The Bachelorette guide to relationships. On Monday night's episode, Becca and Blake destroyed all of Arie's Bachelor mementos for the first one-on-one date of the season, and not only did it seem like it was totally cathartic for her, but it was also a lot of fun to watch. Let's be honest: Wouldn't everyone love to take a baseball bat to a flat screen TV to release some stress?

Armed with baseball bats and goggles, Becca and Blake walked into a warehouse where Chris Harrison was waiting, Once they got inside, Becca slowly realized what was going on — and that she was surrounded by Arie's stuff from filming The Bachelor. There were towers of champagne bottles, his race car from the demolition derby, the gray couch they sat on as Arie ended things, and even a bunch of TVs playing Arie's proposal to Becca were there.

And then, because this is The Bachelorette and, as fans, we should prepare ourselves to expect the unexpected, Lil Jon suddenly materialized as "Turn Down For What" played and the fun quickly began as Becca and Blake got to destroy everything. And of course, Lil Jon was there to provide commentary. But as it turns out, it wasn't just cathartic for Becca — it was cathartic for Bachelor fans as a whole.

It didn't take long for fans to take to Twitter to talk about the date, and the reception was overwhelmingly positive. Not only was it good to see Becca have the opportunity to get out all those negative feelings she might have still been carrying around about Arie, but it was also a good way for fans to let their anger toward him go, too.

Most people were pretty pumped to see this all play out:

Others thought that Lil Jon was a nice touch. Why? He just was, let's not dwell on it.

There was this helpful suggestion, which honestly would have made the date even better than it already was:

This person pointed out the true tragedy of the date: The fact that all that champagne went to waste. It's a shame, yes, but if it helped Becca move on, maybe it was worth it?

And then, of course, there were also a few people who were trying to imagine what watching this at home must have been like for Arie and Lauren, which honestly couldn't have been good.

But it's hard to feel that bad for him, because this is something that Arie did to himself. Besides, it was just so much fun to watch.

And regardless of how anyone else felt about the date, what really mattered is that Becca really seemed to be having fun. Doesn't she deserve at least that after what she's been put through?

By the time they were done and sitting down drinking champagne, Becca said that she felt ready to move on now that she's dating again, so apparently, this whole "smashing your ex's things" method of dealing with a breakup works. It looked like so much fun, and the rest of their date seemed like a really good time, where she and Blake got to talk about their past heartbreaks and really get to know each other. Maybe we should all smash a few things with a baseball bat before a first date from now on.

It's good to see that Becca's moving on to better, happier things, and now, it seems like fans can finally move on, too. Will this be the end of the Arie digs this season, though? Oh, please. It's only episode two.