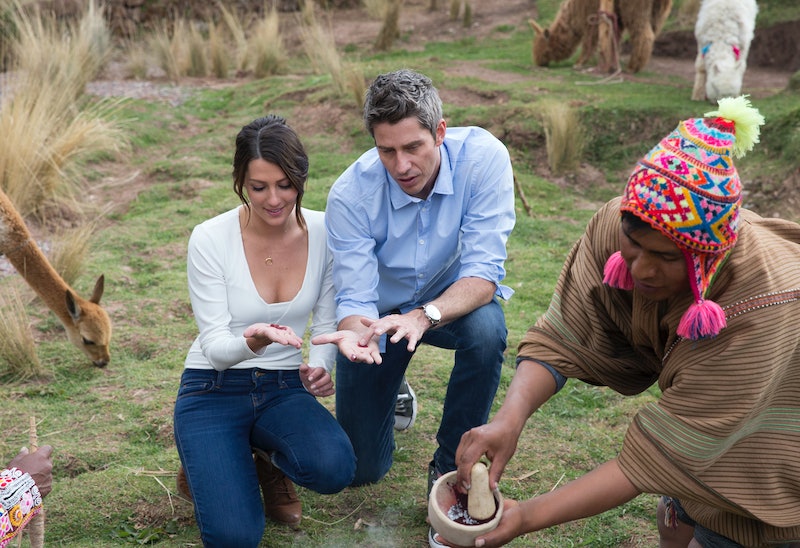 Then there were two. As Arie Luyendyk Jr.’s season of The Bachelor comes to a close, he will be making a choice between two women: Lauren and Becca. So, just who will he choose? For fans who are paying attention, there are many reasons to think Becca doesn't win The Bachelor — and, sadly, there's probably nothing she could have done about it.

In the most recent episode, Becca’s ex-boyfriend Ross crashed the show to profess his love for her. More confused and annoyed than anything, Becca quickly told him that she was there for Arie and sent him home. However, that wasn’t before Ross was able to sit down and have a talk with Arie revealing how much he loved Becca and wanted her in his life. The whole situation made both Becca and Arie visibly upset. Arie was clearly concerned about whether Ross would ever truly not be a factor in Becca's life.

In the grand scheme of things, everyone has an ex. One pushy ex should not be a reason to break up with someone. Especially, since Arie had said that he had fallen in love with Becca. Unfortunately for her though, he also has said those three powerful words, “I love you,” to the other remaining woman — Lauren. With him using such strong language, at least one of these women is going home brokenhearted. Fans aren’t completely clueless to who that is more likely to be though, as there is evidence to suggest the brokenhearted woman will be Becca.

During The Women Tell All special, there was one moment that stood out and confused many viewers. Caroline called Arie out and said, “I know what you did, and I don’t know how you could do that.” Following the taping of that episode, The Hollywood Reporter was able to get a bit more clarity from Caroline. She told the outlet that she’d been hanging out with the woman whom Arie had left brokenhearted. “You hear the story, but when you physically see the person breaking it hurts my heart," she said. "So I happened to walk into this reunion show and I couldn't help but light Arie up.”

While she didn’t reveal the person by name, all signs point to the hurt individual being Becca, since the two are so close on social media. In one Instagram post Caroline even refers to Becca as her BFFL (best friend for life).

Speaking of the contestants’ Instagrams, looking through how they handle photos with Arie can also hint at the future outcome of the series. On Lauren's Instagram, there are several of overtly romantic and friendly posts with Arie. She has not one, not two, but five posts with her and Arie posing together, and, in each one, they’re touching. Wouldn’t these photos be strange to post knowing you did not end up with him?

Lauren even included a photo of the pair kissing, while Becca's Instagram has almost no trace of Arie outside of a couple of production stills to promote the show. Perhaps, because of a heartbreak that’s too fresh, Becca doesn't want to reminisce, like Lauren clearly does.

Arie's hesitance about Becca's ex, Caroline's comments, and the ladies' social media are all subtle hints that it is Lauren, not Becca, who will be winning Arie’s heart on Monday night.

Obviously, fans won’t know for sure until all is said and done — but Becca is more likely to be a heartbroken next Bachelorette than a winning part of a Bachelor couple at this point. However, The Bachelor finales have a reputation for being shocking. Perhaps, fans everywhere will be truly surprised at the end of this season, too.

More like this
Everything To Know About 'Bachelor' Host Jesse Palmer
By Justice Namaste and Radhika Menon
Here's Our Ranking Of The Funniest 'Bachelor' Casting Ad One-Liners So Far
By Grace Wehniainen
Where Is Clayton Echard Now? The Former 'Bachelor' Star Is Dating Susie Evans
By Kadin Burnett
Former 'Bachelor' Producer Elan Gale Knows The Secret To Your Favorite Shows
By Samantha Rollins
Get Even More From Bustle — Sign Up For The Newsletter