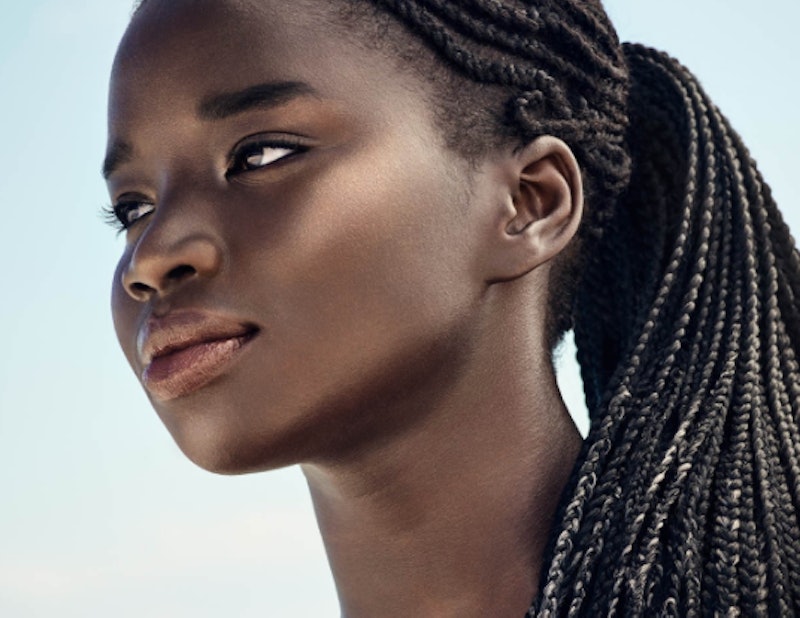 There's nothing worse than getting hyped for a product launch just to discover that the new release won't suit your skin. Every beauty lover with a deep complexion could probably relate any time a new highlighter that ashes out deep skin enters the market. Luckily, Becca's new Chocolate Geode Highlighter is a dream against deep skin, making the brand's Shimmering Skin Perfector range one of the most inclusive lines out there.

Available in cream, powder, and liquid form, Becca's highlighters are the real deal. Even before the brand released their newest chocolatey sensation, their line of glitzy illuminators has been a fan-favorite. Their impeccable formula is the reason beauty enthusiasts lost their minds when Becca introduced a highlighter vault and took the limited-edition seal off of Jaclyn Hill's Champagne Pop to give it a spot within their permanent collection. The doors have just been opened for more beauty lovers to become obsessed with all of Becca's sparkly goodies, now that the brand has created their darkest highlighter ever.

Introducing a rich gold that gives deep skin the most radiant, non-chalky glow, Becca has taken their highlighter game to the next level. So. it's absolutely necessary that you take a gander at the Chocolate Geode Shimmering Skin Perfector that's already getting a ton of hype.

Try not to drool as you catch a glimpse of this beaming wonder. The brand describes it as a "rich chocolate brown with gold pearl", hence the reason behind it's desert-themed name.

The highlighter, retailing for the same $38 price tag as Becca's other pressed illuminators, has yet to make its way into liquid form like some of the other popular colors. But that won't stop it from becoming a best seller. Just one look at the before and after photos of model Seynabou Cissé's glimmering facade on Becca's website and you'll be convinced that Chocolate Geode belongs in your makeup stash.

Applied to the model's cheek bones, cupid's bow, forehead, and the bridge of her nose, the dark golden shimmer looks immaculate. It's not so blinding that it hurts your eyes, but it adds just enough of an "I woke up like this" luminosity to look stunning against a deep skin tone.

The new shimmer joins the lineup of Becca illuminators that have becomes staples in plenty of beauty enthusiasts' makeup routines. The rich highlighter is the perfect addition to the lineup, as it extends Becca's shade range. What was once a line that seemingly catered to fair to tan skin tones now includes something extra special for the deepest complexions.

Even though it may have been made with dark skin in mind, Chocolate Geode isn't just for people of color. Swatches on varying skin tones prove it's equally stunning against light and dark skin. While it enriches deeper complexions with a sun-kissed glow, it gives fairer skin a bronzed shimmer. There's just no beating an illuminator that magically transforms all skin tones.

As if the brand really needed confirmation that chocolate Geode was a good addition to their line — because, clearly this all-inclusive highlighter was a winner from the start — fans were quick to give their nod of approval.

Apparently, "Chocolate Geode" was a suitable shade name, as some thought the new highlighter looked good enough to consume.

There was just no way that a golden hue that beautiful couldn't appeal to the masses.

The addition of Chocolate Geode makes Becca's luminizing offerings all the more better. With trendy stunners like the pinky-pearl Lilac Geode, go-tos like the pearlescent Champagne Pop and now an all-inclusive number like their newest shimmer on the block, Becca is hands down. the undisputed glow champ.