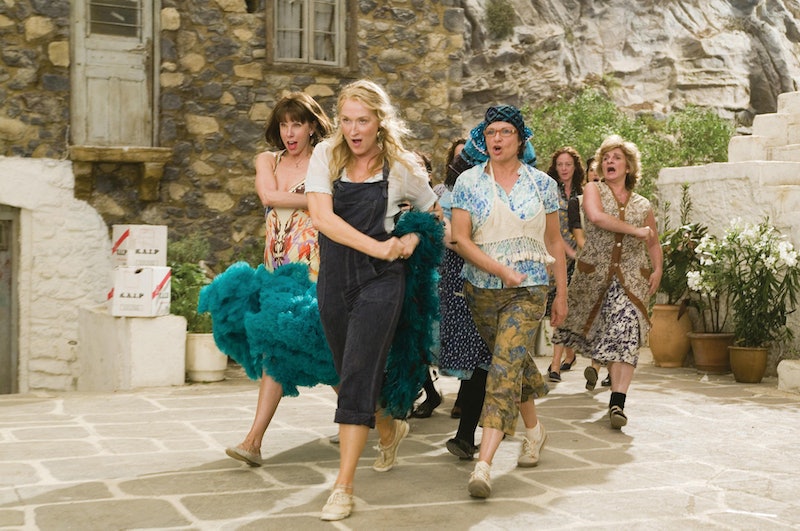 “I was in there on Monday recording the trailer for Cats,” says Becky Bentham casually, gesturing across the garden of Abbey Road Studios, while showing me round the iconic North London building. Outside a flurry of Beatles fans (and a queue of beeping cars) are clustered around a certain zebra crossing where fans are reenacting the cover of the band’s 1969 album Abbey Road, which was recorded just next door in Studio Two.

A veteran music supervisor, Bentham has built a name for herself working on films based around legendary soundtracks — Mamma Mia!, Bohemian Rhapsody, and Les Misérables, to name just three. Her forte is translating music’s biggest icons, be it Queen frontman Freddie Mercury or the music of Swedish pop legends ABBA, from the stage to the big screen.

I launched the company with the Lord of the Rings trilogy, and the work just flowed in as a result of that.

“Whether it’s somebody sitting down on camera and playing the piano, or an entire orchestral vision plus dancers and singers, or clearing a handful of tracks that are needle drops [pieces of music used as the focal point of a scene], when you’re hired in the capacity of music supervisor, you’re responsible for every musical element on that picture,” Bentham explains.

It’s a job that has taken Becky Bentham to some pinch-yourself destinations — namely, delving through unheard recordings of Freddie Mercury with his Queen bandmates Brian May and Roger Taylor, sharing a film set on a remote Greek island with the one and only Cher (“Cher’s on everyone’s dinner party list, isn’t she?”), and collaborating with Benny Andersson and Björn Ulvaeus. Working directly alongside the ABBA members on Mamma Mia! was a “hairs-up-on-the-back-of-your-neck moment,” she says. “These songs you’ve lived with from being a kid are suddenly being brought to life, by the original members of the band.”

“How lucky are we, to have all these people available to us!” she continues. “The beauty of having Brian and Roger on Bohemian Rhapsody, and Benny and Björn on Mamma Mia!, is that you guarantee you’re preserving the original integrity and intent of the music, as much as possible. Having them in the fold endorses the end result."

For Bentham, ensuring that the final film does justice to a cult theatre musical or a global pop icon presents both huge opportunity and a challenge. “There’s pressure, insofar as fans are encyclopaedic about their bands. Filmmakers sometimes have to tweak timelines slightly, and for fans, that can sometimes be a huge issue,” she adds. “And equally, you’re trying to make a representation of somebody’s life, in a way that plays better as a movie. There’s a big responsibility felt with that sort of thing — but equally, a big excitement.”

Born in Yorkshire and raised in Berkshire, Bentham now lives in London with her 15-year-old daughter and her father. She’s been based here at Abbey Road Studios for years and loves the feel of the creative hub; often, she’ll think about arranging a meeting with a collaborator, and then bump into them two hours later in the garden by chance.

Her career started at the film production and distribution company GoldCrest Films, in the sound department. “We’d do post-production sound work on everything from Bertolucci’s The Sheltering Sky to ads, and anything in between,” she says. After a decade managing a post-production studio in Sydney, Australia, Bentham returned to London, where she set up her own company 22 years ago.

“By then I had a lot of music supervision under my belt,” she says. “I launched the company with the Lord of the Rings trilogy, and the work just flowed in, as a result of that.”

There’s a perception that behind the scenes, the music and film industry can be dominated by men. Though “it used to be a bit more like a building site,” Bentham reckons that there’s a shift gradually taking place.

“That wasn’t a conscious decision to hire more women, it just happened,” she adds. “On my watch, women will continue to be hired and treated with equal respect, as an example of what ought to happen. Organically, it will happen.”

Looking back over a varied career, she has particularly fond memories of music supervising Sing Street — John Carney’s 2016 coming-of-age musical. A critical hit rather than a box office smash, it was also a project that cemented why musical films will always hold special appeal for Bentham.

“John Carney is very involved on the music side,” she explains, “and we had long dialogue in the early stages about how to approach the songs. Working with a director who is so musically informed makes such a difference to what we do, and it becomes a real collaboration.”

The journey of all of that, and the absorption, is all consuming. You’re living with those sorts of projects from beginning to end.

Where music supervisors are drafted in later down the line, she points out, there’s always a risk that directors can be left disappointed. After months of playing a scene through with a specific song in mind to soundtrack the action, it’s sometimes impossible to negotiate the rights to use it — another vital aspect of a music supervisor’s role.

“If there are problems, it can be a real challenge trying to replace it; no alternative is ever quite good enough,” Bentham says. “For some artists, there are some things that they just won’t clear their music for. There might be a subject matter they just won’t let their music be used up against. ... The key thing is to get involved as early as possible. On the big musical projects, we’ll be involved from the script stage.”

And given the nature of musical film projects, Bentham’s involvement also extends to working directly with a film’s leading stars. “Even the top A-list actors that walk into the studio feel daunted,” she says. For Mamma Mia!, Bentham headed to Stockholm, where actors recorded their parts with ABBA’s very own Benny and Björn.

For the cast, inhabiting a slice of ABBA’s world gave them the confidence to approach the likes of “Waterloo” and “Dancing Queen” with appropriate levels of gusto. “Sometimes I feel like a performer doesn’t need to be a world class singer to be convincing,” Bentham says. “Somebody at that level can perform their way through a number, and it’s a different delivery that works.”

And she’s right. Pierce Brosnan and Colin Firth — better known for their on-screen antics than belting vocal delivery — gave two of the most memorable performances of the entire film. “They knew their limitations and went for it anyway, so hats off,” says Bentham.

After over 30 years in the business, there’s still no such thing as a usual day — and that, Becky Bentham concludes, forms a large part of the appeal. “I’m still learning every single day. No two projects are ever the same. Normally, you have a plan first thing in the morning,” she laughs. “And then the phone rings and it all changes.”