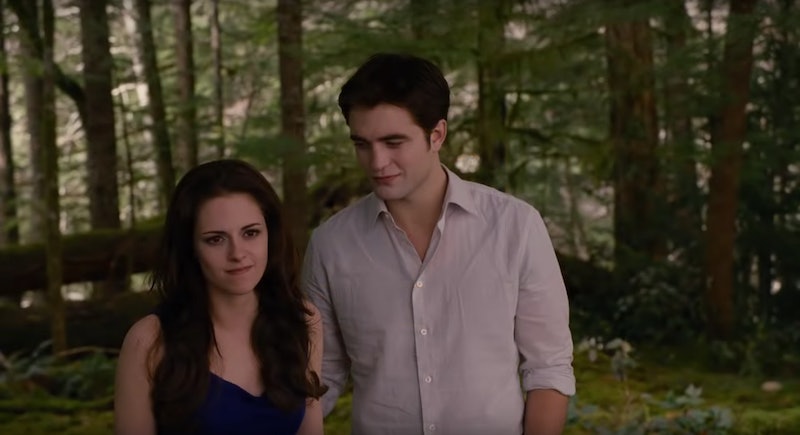 It started while my husband was at a conference, one of many work trips during a lean and lonely year. We’d moved 500 miles south to North Carolina for his job, and I was adrift, alone, sometimes deserted at the bottom of a gravel road when he left for work in the car. Jonathan had landed with a job and a purpose; I landed only with him. I’d never felt more like a wife, or a dreaded anti-feminist version of one.

It took us a while to recalibrate, but when we finally came out the other side, we planned a vacation to celebrate. We were headed to Curaçao, the island where my grandfather was born. But first, there was another conference. I geared up to face the empty house. I scheduled calls to friends, walks with the dog, wine and movie nights for one.

I saw the little thumbnail on Netflix first: Kristen Stewart as high-school bookworm Bella Swan, innocent but not demure, lusty, and young, and Robert Pattinson as Edward Cullen, her vampire boyfriend, too pale, with beautifully bronzed cheekbones and an ill-fitting pea-coat. I had adored the Twilight series in my early 20s, for its portrayal of unrestrained, claustrophobic love. With Jonathan away, what better time was there for a marathon?

And so I watched. I became absorbed by Bella’s appetites, all the things she wants: to kiss, to touch, to defend the ones she loves, to f*ck, to live forever, to be consumed by someone who has the power to destroy her but never would because that’s not love. I wanted these things, too.

After Twilight, I watched New Moon, then Eclipse. Three days in, I ordered Breaking Dawn, Parts 1 and 2 as Blu-Rays, but then I caved and streamed the digital rentals because the two-day shipping wasn’t fast enough. I watched Bella and Edward marry, bone, bear a half-vampire baby, frolic in the woods, and stand by one another in an epic final death match against a rival vampire coven that descends nonsensically on Forks, Washington. At the end, they all live happily ever after, literally, because they’re immortal. As I watched, I knew there were too many reasons to cut off my quickly blossoming obsession: Twilight is painfully white, hetero and cis normative, quaint, and entirely too much. I fell anyway.

I was trying to get under what had given me the itch for a teenage vampire fantasy, and now, past 30, a decade too late.

When Jonathan came back from the conference, he was indulgent, if perplexed, by my obsession. Years ago, he had watched every Twilight movie in the theaters with me and listened to me chronicle the plot of each of the books as I read them under the pretense of relating to the kids in the youth program where I worked. He didn’t judge my renewed swooning about the series, but he did want to know whether the Twilight binge had interfered with my writing, and if I’d knocked out any pages while he was at the conference. "No, but it’s all work, you know? Like, being exposed to stories, that’s a part of the job," I told him.

Once we arrived in Curaçao, I found myself talking nonstop about Twilight. I was trying to get under what had given me the itch for a teenage vampire fantasy, and now, past 30, a decade too late.

I got to the root of my fever one day at the beach. I felt sexy in my cobalt blue one-piece. We were sunburnt and happy from days of dancing salsa, drinking gin-and-tonics with my distant cousin at a beachside bar, driving through the desert and along the shore. In the water, I told Jonathan about the honeymoon scene where Bella and Edward attempt to have sex for the first time. Edward is hesitant, because it could all be very dangerous for Bella. He obliges to make her happy, and Bella, naked and calm, wraps her arms around her new husband and says, “I trust you.”

“Doesn’t that sound like the opposite of my personality?” I asked Jonathan. He raised his eyebrows and mmhmmed. He knows intimately how quick I once was to doubt, how prickly my defenses could be.

There are no out-of-pocket therapist’s fees in Twilight, no mindfulness or taking responsibility for one’s emotions. There are just meaningful glances in the moonlight, words of love, raucous sex, and forever.

My gut-fears — that attachment is fleeting, people erratic, and love dangerous — were formed long before my memories. They are like sediment over the synapses in my brain. I’ve spent a decade in therapy, unlearning. I journal; I anchor myself in the present; I use words like trauma and trigger to explain my tender heart and my fearful body. The work has been messy and hard, but it has enabled me to endure loving and abiding so close to another. Bella makes it look dreamy to be unguarded and open to love. There are no out-of-pocket therapist’s fees in Twilight, no mindfulness or taking responsibility for one’s emotions. There are just meaningful glances in the moonlight, words of love, raucous sex, and forever.

Perhaps I find Twilight so comforting because the series is ultimately toothless. The Cullens may be monsters, but they are also preternaturally good. They mean what they say and do what they say they’ll do. In my life, the fictions of Twilight break down. If the Cullens were people that I knew, Edward would absolutely drink Bella’s blood; Bella and Jacob would f*ck and feel bad about it — or maybe not; the Cullens would grow sick of living on top of each other for decades and never finding the right job or real friends; cars would be totaled or break down on the side of the road; the bad guys might win and we’d be left with nothing to do but call them motherfuckers and turn on one another; on her worst days, Bella would throw plates and slap her kid; we would tell lies and break promises, refuse to say we’re sorry. This wouldn’t be all that we did, but it would be part of it. We’d love each other, but it wouldn’t always feel like love. Sometimes we wouldn’t love each other at all.

It’s no wonder the installment I like least is the second, New Moon. The reason is plain: Edward leaves Bella, ostensibly for her own good. I am certain that if Jonathan had done this to me early in our relationship, I would never have recovered. The only part of the novel I find heartening is when they are reunited, and Edward assures Bella, “Your hold is permanent and unbreakable.” I love this phrase, even if I know nothing is permanent and unbreakable in this life. Even on my best days, I don’t think my bond with my husband is unbreakable — what I believe is that we will not break it.

While my therapist doesn’t condemn my rewatching and rereading Twilight (“Obviously, it’s giving you something that you need,” she says), I understand that many others might. As a writer, it is nearly unthinkable to admit my affections out loud: Twilight is girlish, lowbrow, and — worse yet — commercial. I don’t care. Like Bella, patron saint to the unpardonably boy-crazy, teenage icon of third-wave-choice-feminism, I want what I want. Twilight speaks to my most evolved self and my most wrecked: the healthy part of me that believes bonds of love are stable and can last, as well as the unhealthy part of me that wants to love immoderately, obliterate loneliness, any reminder of the certainty of loss.

I am long overdue for vulnerability. I want to risk and surrender and gamble, to no longer fear the monstrous in others and myself.

And yet, I won’t ever argue that Twilight is undoubtedly useful for everyone. The terrifying age gap between Bella and Edward, the pro-abstinence messaging, and romanticization of jealous, overprotective behavior are disturbingly problematic and anti-feminist. I will say, however, that Twilight has been useful for me. I am long overdue for vulnerability. I want to risk and surrender and gamble, to no longer fear the monstrous in others and myself. I can choose to admire Bella, in part, because I am, finally, already safe.

And so I sift through the fantasy of Twilight for what I can use. I indulge in the delusion of forever because there are finally things in my life I’d like to keep for that long — my husband and myself, but also the dog, and the shade of trees, the taste of gin, and the way it feels to stretch, the thrill of stories both low and high, my notions of God, the idea I kick around of one day learning the piano. I know too well that everything I love is a thing I will lose, one way or another, but I want them all the same. They are fragile and impermanent, fully breakable, but they are mine.

Our days in Curaçao went too fast. We took pictures and walked the Queen Emma Pontoon Bridge in the capital, Willemstad. We hiked up a mountain in the scorching heat, Jonathan averse to all that walking but willing to make the trip because I asked. He looked at guides on flora and birds, named the plants we saw, and encouraged me when I started to worry that I couldn’t make it to the top, when I said, as I often do, I cannot do it.

We spent our last days in a small house by the sea. I beat Jonathan at chess for the first time. We drank cheap rosé and got bitten by mosquitoes. We had sex. We fought one night over what exactly I can’t remember — probably his driving, or maybe nothing at all. One evening, at dusk, we climbed down a steep staircase built into a cliffside, into the ocean. We were in the deep water, just the two of us, and I was frightened — of sharks, whales, drowning, smacking my head against a rock.

“When did I become so afraid of everything?” I asked Jonathan. We treaded water, and I was on the lookout for some disaster, some danger, that would come and sabotage our joy. Jonathan said that he was afraid, too.

He climbed out and stepped off one of the steps into the water. He called for me to join him. When I explained that I was too scared, he said, “Think of our daughter.”

We didn’t have any children then, but we referenced them often — to dream together about the future and to talk in code about ourselves and the past, how we would have liked to live.

I stood beside him on a ledge of rock. We weren’t very high, but it still seemed like a long way down. I wanted to turn around, but I knew I couldn’t leave him out in midair alone. When he jumped, so did I. We hit the water clean and good. After, I wanted to leap in again, and I did, twice more on my own. Each time, the freefall seemed a bit shorter.